A very wet and stormy fortnight with heavy rainfall, strong winds and warmer temperatures than are usual at this time of year. There have been a few fine autumn days sprinkled sparingly among the grey and windy ones. The rain has pushed up water levels across the whole of the Otmoor Basin and from the top of Otmoor Lane one can see that most of the lower lying fields are flooded.

There has been lots to look at and lots to look for, not always the same thing! This past weekend has been notable for the massive numbers of Golden Plover that are spread over the whole reserve. On Sunday morning, after the early heavy rain, there were several thousand of them in spectacular flocks wheeling and sparkling in the sunshine over Big Otmoor. Amongst them was one lone Grey Plover, only the second one to be seen on the moor this year. It took great patience to locate. It seemed to me that as soon as I started to scope through the flocks when they were on the ground, something real or imagined would spook them and send them up en masse.
Courtesy of Badger.
There were five or six hundred Lapwings in the same field and several other smaller flocks on Greenaway’s, Closes  and sometimes from the second screen we could see other flocks flushing from The Flood. The spectacle was so good on Sunday that several people I spoke to said they thought it was better than the Starlings. 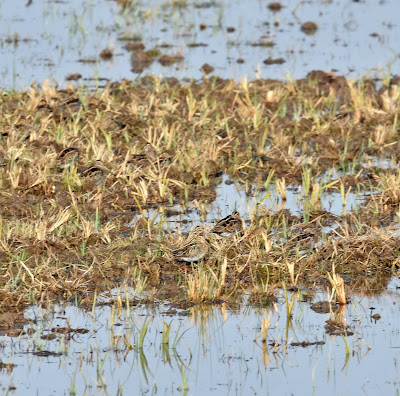 Over the past couple of weeks, we have been carefully watching the muddy spit that runs out into the first scrape on Greenaway’s. Sedges have been cut right down and rotovated leaving muddy clumps and dried out roots.

To the naked eye it is easy to assume holds no more than a scattering of Lapwings. With binoculars it is possible to pick out several Snipe hunkered down against the wind or standing on the waters edge, but with a careful look using a scope the number of Snipe out there shoots up. Their cryptic disruptive plumage looks as though it was designed specifically and exclusively for such a background.

It has been a pleasure to point them out to visitors who otherwise might have walked past oblivious of their presence. It sometimes felt as though we were exposing a conjurers disappearing trick. On Saturday morning in the drizzle two of us scoped carefully through them and counted eighty-seven of them, by Sunday morning after very heavy overnight rain the spit was almost submerged due to rising water levels and I could only find five! It is safe to say though that there are very large numbers of Snipe wintering on the moor.

There are high numbers of wildfowl across the moor although not very many of them are in front of the first screen and almost none at the second. Many birds are out on Big Otmoor including several hundred Shovellers, many hundreds of Wigeon a few Pintail and many Teal. 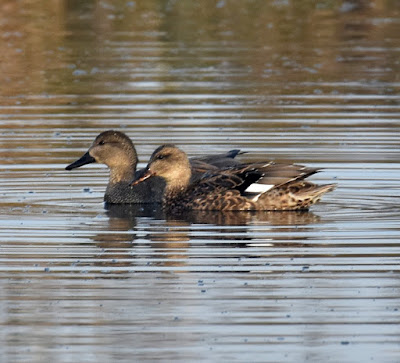 Increasing numbers of Wigeon are electing to feed out on Ashgrave now that the pools have filled up, they are grazing on the grasses close to the waters’ edge and at the slightest sign of danger rushing back into the water. The lagoon in front of the first screen is the almost exclusive haunt of twenty to thirty Gadwall mostly paired up.

There is almost always a Marsh Harrier to be seen hunting over the reedbed, Greenaways or Big Otmoor. They are seen occasionally but less frequently over Ashgrave. There are four different individuals that we have noticed, an adult male and female and two juvenile birds, but they are seldom seen together. 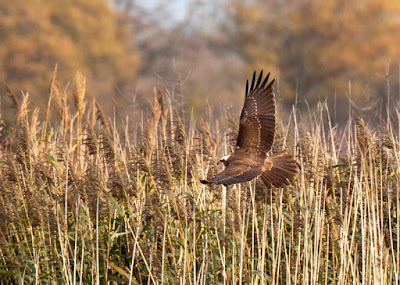 There have been some other very sporadic sightings of a ring-tailed Hen Harrier. Merlin is being seen more frequently, but as is usual with this species it is only seen briefly as it flashes through hunting close to the ground, I have seen one on Closes but there is no regular pattern or location for such sightings.

There have been no further Short Eared Owl sightings and it may be that the extensive flooding has affected the number of small mammals that are available to be hunted across the moor. Peregrines have no such scarcity of prey items with everything from Teal, Lapwings , Golden Plovers and Starlings to choose from.

There are several mixed flocks of small passerines feeding in the scrub along the bridle way. Often these loose associations coalesce around a Long Tailed Tit flock. 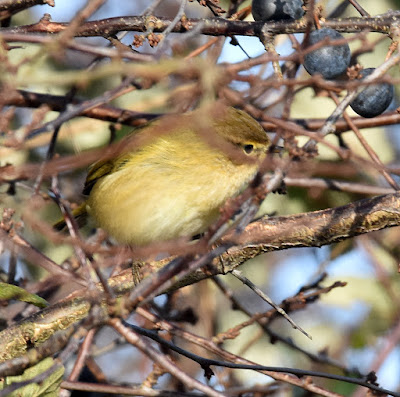 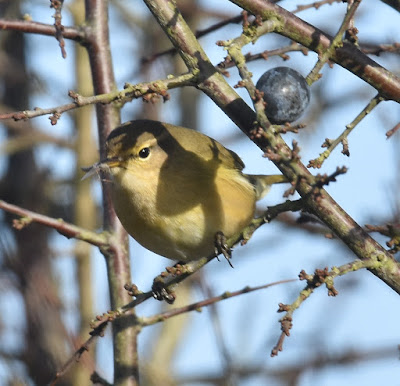 It is always worth waiting and looking through these parties as other shyer species can be spotted with them. There are several Chiffchaffs amongst the small bird flocks along the track to the second screen.
A Siberian Chiffchaff was amongst them last week and we have seen Goldcrests and Tree Creepers when we have stopped to watch the birds go by. It is of course much easier to do now that the leaves are mostly off the trees and bushes.

There are a couple of Marsh Tits coming to the feeders and a host of Reed Buntings, Linnets and chaffinches taking advantage of the feeding programme beside the hide.

I found a Greenfinch quite close by, a bird that is increasingly uncommon on the reserve. The probable Glossy Ibis of just over two weeks ago, was seen and photographed flying over the first screen.

So now our yearlist stands at a very respectable one hundred and fifty-one species and there are still over six weeks to go to the new year!