After the all the harsh weather and flooding of recent months, this weekend the reserve was awash with birdsong and it really lifted the spirits. Vociferous Sedge Warblers and more rhythmic Reed Warblers called from the ditches and the reedbeds. The hedgerows were full of song as the other warbler species sought to make up for lost time taking up territory and pairing up. Over it all and almost continuously one or another Skylark cascaded its notes over the fields. At least three singing male Grasshopper Warblers reeled monotonously in the car park and sometimes could be picked out from amidst the froth of blackthorn flowers. At least two Cuckoos were calling on both days and could be seen flying fast between their songposts with their deceptively raptor like flight.
Lapwings are now flying up to challenge Crows, Kites and a Raven that are invading their airspace. A Black Tailed Godwit showed well in the second scrape on Greenaways and the birds of the weekend for me, were a pair of Whimbrel stalking around the sedges out on Ashgrave and easily viewable from the hide. Wheatears and Whinchats are still passing through and could be seen up at Noke and along the visitor trail to the first screen. On Sunday morning a drake Garganey was dozing at the back of the southern lagoon and two Barnacle Geese were feeding out on Ashgrave, the Whitefronted Geese have now finally departed. During the week several Hobbies have been seen and we regularly get a real influx during the first week of May with anything up to twenty birds perched on gates and fences of Greenaways and flying up to feed on the slow moving dangly legged St Marks flies.
The only other summer visitors that have yet to arrive arrive are Turtle Doves. They are our most threatened breeding bird and without their soft purring call, summer on the moor would just not be the same. I hope that over the next couple of weeks I will be able to report their safe arrival.

From a scattering of migrant arrivals last weekend this weekend there was a flood. Unlike normal years when warblers and passage migrants arrive in a regular, steady sequence, this year everything seems to arrived at once.
All of the regular warblers are now present with the exception of Garden Warbler. Also notable by its absence is Cetti’s, just one singing bird present for about a week last spring and this year no sound at all. Our Cetti’s have not yet recovered from the freezing winter of 2011/12 and it would be wonderful to have them back adding their strident calls to the chorus that is now pouring from the hedges and reedbeds. Grasshopper Warblers were calling in the carpark field and a couple were also seen very close and out in the open along the path to the second screen. Sedge Warblers still outnumber Reed in the ditches but that will change over the next couple of weeks.
Whinchats were found in the carpark field on Friday and along the visitor trail on Sunday. There were six Wheatears at Noke on Saturday and Sunday with several others on Ashgrave and Big Otmoor. Cuckoo was both heard and seen on both days and will be regular now until it leaves at the end of July.
Both Marsh Harrier and a Ring-tailed Hen Harrier were seen over the weekend and Peregrine could be seen flying over and sitting on the ground on Ashgrave. A Raven was also mobbed by the breeding Lapwings on Big Otmoor.
Two Little Stints were reported last week on the scrapes on Greenaways and there were thirteen Black Tailed Godwits on Ashgrave on Sunday morning.
Brimstone, Peacock and Small Tortoiseshells were in evidence and Toads are making merry in the ditches. Several Grass Snakes could be found warming up in the sunshine and Brown Hares are performing their mad March behaviours in April! There is now so much to see and hear on the moor that it is difficult to know where to go but if time is limited the car park field and the Roman Road are full of interest. Perhaps our first Hobby to look forward to next week.

Update: A Hobby was seen over the reed bed and the carpark field on Sunday morning (per S.T.)
Posted by bark at 04:54 No comments: 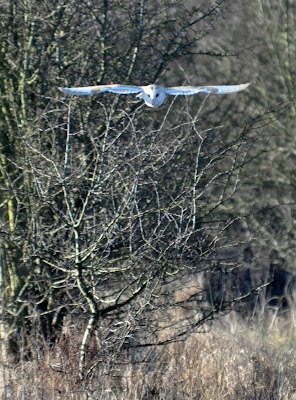 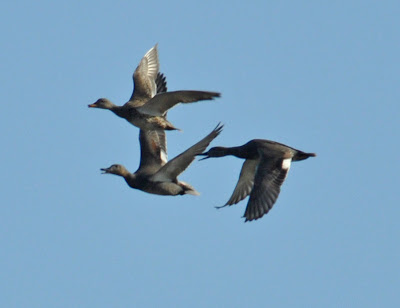 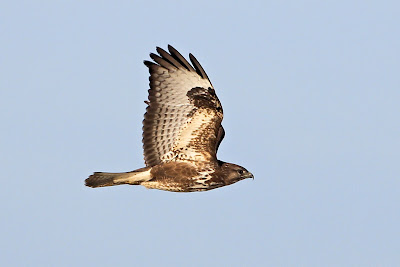 Despite the strong winds and occasional showers spring has finally arrived. Warm weather and the wind from the south brought a fall of Willow Warblers and Chiffchaffs to otmoor this weekend with even more of them on Sunday than Saturday. Only some were singing, most were flycatching among the still bare twigs and branches of the hedgerows, seldom staying still. After such a long and difficult passage there must be a powerful urge to feed up and get into breeding condition.
Duck numbers are falling off now with smaller and fewer parties of Wigeon scattered over the fields. Teal are fewer and much dispersed. There are still two pairs of Pintail out on Big Otmoor and good numbers of Shoveller and Gadwall the latter often performing noisy courtship flights over the reedbeds. Garganey were both seen from the first screen and heard from the second, their call being very distinctive.
The Barn Owl in the carpark field put on a superb display as it hunted for at least half and hour in the Car park field on Saturday morning, sometimes coming very close. The other regular bird was again seen hunting around the reedbed. Peregrines and Buzzards were seen over Ashgrave and the Ring-tailed Hen Harrier is still being seen regularly. Kites and Lapwings have have begun to contest the airspace again over Big Otmoor. Snipe numbers are high and there were drumming birds seen and heard on both days. There are still at least one hundred and fifty Golden Plover dividing their time between Greenaways and Big Otmoor. They are now almost all moulted into full summer plumage and in the sunshine look particularly stunning.
On Sunday there were at least thirteen Little Egrets mostly concentrated on the Closes, it must offer them excellent feeding opportunities to be supporting such good numbers. Grey Herons were also present with at least eight on Ashgrave. Best of all was the sight of a bird sitting on a nest in the oak trees that that stick out into Ashgrave. Herons have not used this site for several years and were the heronry to become properly established it might encourage the Little Egrets to join them, as has happened at other sites.
All three common hirundine species have now been seen and on Sunday Swallows were especially noticeable. Wheatears were out on Ashgrave and big Otmoor and we were very pleased to find a female Ring Ousel
on the edge of the road down to the rifle range. A flyover Yellow Wagtail was the other new migrant for the year. Hares are behaving characteristically, indulging in wild chases, boxing matches and mad scrums.
Over the next couple of weeks I expect the migrant warblers to flood in and with them other waders and birds that will only visit on passage such as Whinchat and Redstart. It is a really exciting time and feels even better after such a miserable and prolonged wait.

PS Subsequent to writing this Sedge Warblers have been seen and heard this morning and a Bar tailed godwit seen on the Barn Field
Posted by bark at 06:36 No comments:

Brown Hare on Greenaways 14th April
Posted by Badger at 15:38 No comments: 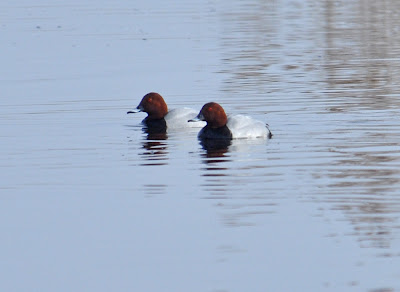 This weekend we took a few more baby steps towards spring but still failed to achieve anything like seasonal weather.
On the reserve more migrants have appeared with the first hirundines being seen on Sunday. A Sand Martin was reported in the afternoon and a lone Swallow was seen by the Robys over the reedbed in the evening. On Saturday the first little ringed plovers were on the Big Otmoor scrapes and two different drake Garganey were seen on both days.
Snipe were very much in evidence this weekend. The male Hen Harrier flushed at least fifty from Big Otmoor on Saturday and the group of volunteers who are training for survey work found more than twenty on the Closes. They also found one Jack Snipe. On Sunday morning there were at least four drumming over the path to the first screen and several “chipping” from the sedge.
Lapwings and Redshank were noisily evident everywhere and the first lapwing nests have now been found by the RSPB staff. A Chiffchaff called in the carpark field on Sunday morning. Peregrine , Barn Owl, Marsh and Hen Harriers were all reported over the weekend.
There are still Redpolls around the feeders and the cattle pens and some of our resident birds were singing steadily despite the chill. Perhaps next weekend will bring in the first real wave of summer visitors.
Posted by bark at 01:22 No comments:

Despite the occasional snow showers and the nagging easterly wind, this was a much better weekend than the last one. I don’t know if it is possible to state exactly how delayed the season is this year, but the summer migrants are not arriving as we would have expected them to in a “normal” year. I suspect that there will be no real influx until the winds abate and the weather starts to come in from the south or west.
There was at least a small group of four Wheatears on the farm fences on the western edge of Ashgrave and along with them were two male Stonechats. They looked very fresh, bright and colourful in the wintery sun.
The drake Ferruginous duck was present on both days and spent a lot time with its head under its wing dozing in the lee of the bank on Saturday and on Sunday swimming very close to the second screen with Tufties and Pochard in the open water. At least three quarters of the lagoon was frozen and some of the shyer ducks such as Shoveller and Pintail were standing on the ice on the far side. It was entertaining to watch the party of Coots who maintained their antagonistic attitudes to each other, even when walking or running on ice, this led to many falls and, as the thin ice melted, sudden swims. A pair of Little Grebes were out to the left of the second screen and a Great Crested Grebe was also with the other wildfowl but sadly does not seem to have a mate.
Elsewhere there are large numbers of breeding Lapwings and Redshank over Greenaways and Big Otmoor. There are also many wildfowl on the pools and floods of Big Otmoor and a flock of at least thirty Dunlin have taken up temporary residence. The regular seven White-fronted Geese are still here.
All three Hen Harriers were present over the weekend and the Barn Owls were hunting in both the carpark field and over the reed bed. Peregrine and Raven were seen frequently but the Marsh Harrier present earlier in the week did not seem to still be here. A Tawny Owl was calling in the Roman Road area and this was the only addition to the Otmoor yearlist this week.
In spite of the cold Dunnocks, Reed Buntings and Skylarks were all singing and hopefully by next weekend they might be joined by Chiffchaffs or Willow Warblers or perhaps I am just being mindlessly optimistic.

stop press  Garganey is regularly being seen from the hide on Ashgrave.
Posted by bark at 01:30 No comments: