On Saturday morning there was still frozen snow lying along the bridle way, in the carpark and on the trails to the screens, by Sunday most of it had disappeared. The lagoons were partially frozen with the northern one much more open than the southern. The ducks were standing glumly around on the ice or paddling disconsolately in the open water. The ring ditch beside the bridleway looked strange, as if it had been filled with milk. Snow had clearly fallen on top of ice and had then been trapped by a partial thaw that had refrozen, hence the opaque white colour on what is normally very clear water.  A Water Rail scuttled along the far side of the ditch accelerating to get across the areas of open ice.
We spotted a Bittern out in the open on the far side of the southern lagoon warming up and preening in the early sunshine. It colouration perfectly matched the ochres of the dry reeds. It stayed in the same spot for twenty minutes or so, I just happened to be watching it through my scope as it did its disappearing act, simply melting back into the reeds …..first you see it ….and then you don’t! A Little Grebe suddenly appeared amongst the ducks and seeing it up close to a Mallard really emphasised it diminutive size. We watched it diving near the edge of the ice and wondered how it could be sure to surface in open water.
There must have been some casualty or other out in the reedbed as three or four Red Kites and three Magpies spent a lot of time time flying back and forth over an area in the northern section. There were certainly three different Marsh Harriers patrolling over the reeds and one of the second winter male Hen Harriers was seen on Saturday with two appearing together at the evening roost on Sunday. Perhaps there have been two all along! 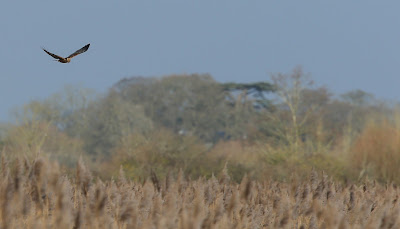 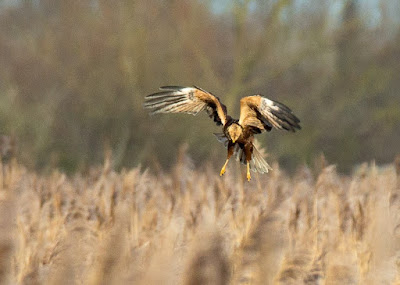 Water levels are finally starting to rise. This is especially noticeable on Ashgrave in front of the hide. With the thaw and with increased water I would expect our wildfowl numbers to rise markedly and perhaps draw in some more Pintail and Pochard. 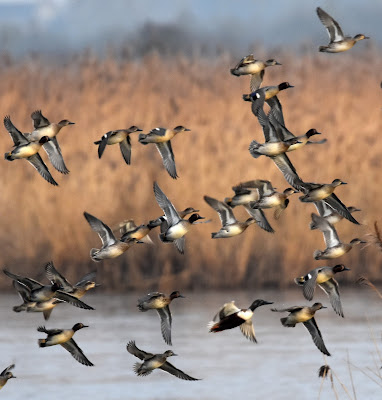 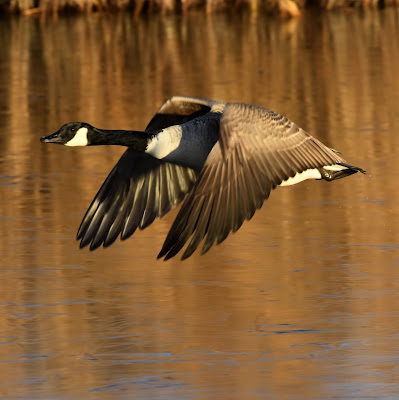 The Starling roost has quite a high attrition rate and we frequently find small piles of feathers and raptor pellets that contain bird bones and feathers. On Sunday we found a Starling that had met a different fate, having tangled its wing on an especially thorny bramble and being unable to get free had perished there in the night. Unfortunate as this was for the bird, it did allow us a close-up view of its exceptionally beautifully marked plumage.
There are several parties of Bullfinches working the hedgerows some are in the Carpark Field while another group can usually be found along the path to the first screen. The pink of the males shines out most brightly in the low red dawn sunshine. After the intense cold of last week it was good to hear Cetti’s calling from at least three different spots this weekend, we lost them for over a year the last time we had sustained low temperatures.
There is a pattern beginning to emerge! At least four times in the last few months an interesting bird has shown up while I have been writing this on a Monday morning. This time it was a female Bufflehead, a north American diving duck that usually only appears in the UK as an escape from collections. Just in case it was later identified as being a properly wild bird I went down to see it. Whatever its’ provenance it is a very attractive little bird. It was out on the northern lagoon diving and feeding on the edge of the ice sheet and looking very happy and settled. It was later seen to be carrying a metal ring on its leg and is almost certainly the same individual that was seen at Staines Reservoir last week. Not eligible for the year-list but a pleasure to see nonetheless. It does seem a little odd that a Penduline Tit that has appeared near Gloucester also with a ring on its leg is regarded as being properly wild….do they not ring ducks in North America? 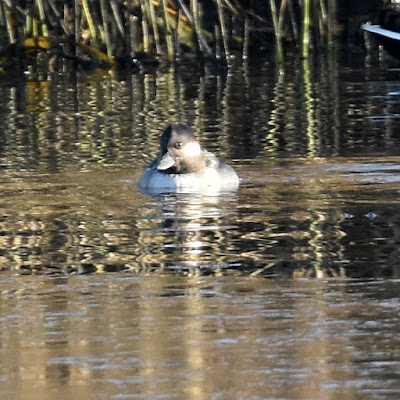 
Winter arrived this weekend with a vengeance. Saturday was frosty, crisp, clear and sunny, whilst early on Sunday morning it started to snow and then continued all day. It meant that I only managed to get down to the moor on Saturday. 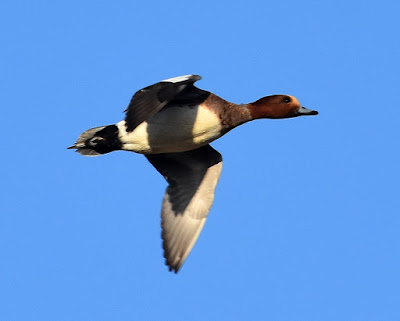 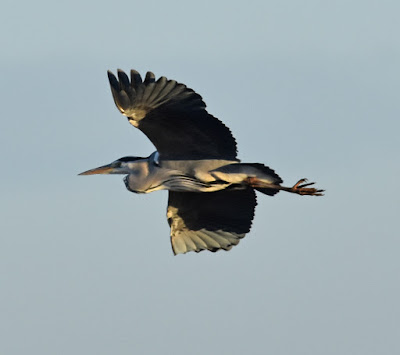 I remember the last serious snowfall about seven years ago. On that occasion, determined to get down there, I set out in the morning for Otmoor, parked in Beckley and walked down the lane. We luckily got a lift in a 4x4 back up to the village but then I managed to get my car stuck in Barton as I tried to get up the hill and back into Oxford. Having learned my lesson on that occasion on Sunday I let discretion be the better part of valour and stayed home.

Saturday morning was beautiful on Otmoor. The air was totally fresh, clean and gin clear. The low sun emphasised the last of autumn’s colours, especially the golds and ochres of the reedbed. There was a fringe of ice at the first screen, but the regular ducks dabbled or dozed on the muddy margins. Careful scrutiny revealed Snipe, perfectly camouflaged and almost totally hidden in the reeds. Two juvenile Marsh Harriers alternated between perching at the top of the low willows in the northern reedbed and cruising above the reeds causing surprised Teal to flush briefly, but appearing to offer the Teal no real threat. 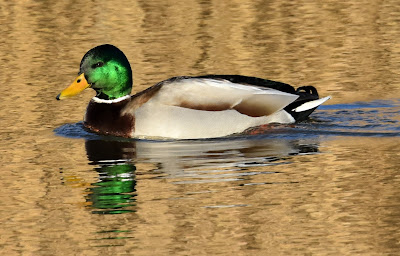 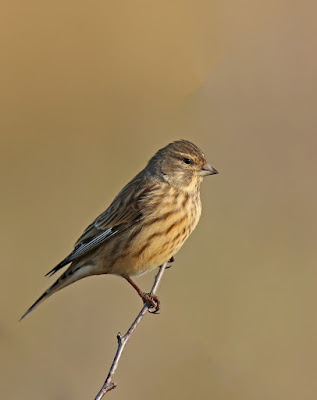 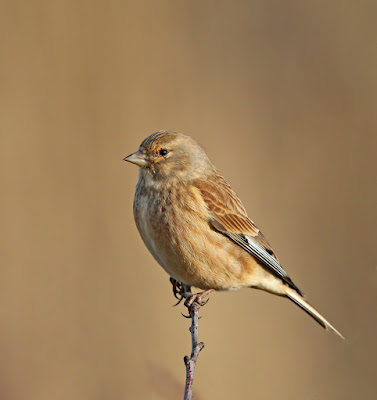 The walk however did mean that we found at least two Bramblings feeding with a mixed party of finches on one of the tracks that headed away from the footpath and towards Lower Farm. This happened as we were on our way back towards the carpark to head home and we were running short of time. On another occasion it would be worthwhile spending longer checking through these birds as they might well have attracted other scarcer species to the flock. 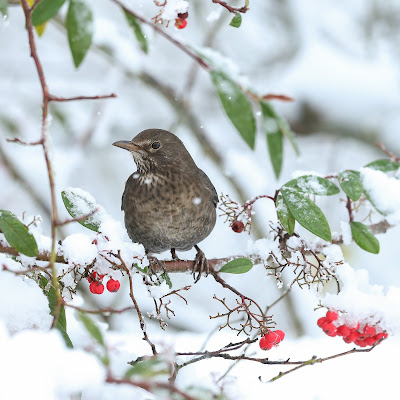 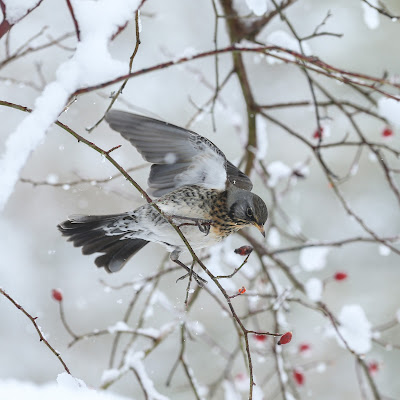 I am hopeful that this cold snap will be temporary as the wildlife does suffer hugely in these extreme conditions. In the last cold snap, we lost all our resident Cetti’s Warblers and saw no Stonechats for well over a year. If the reedbed freezes solid the Starling roost will collapse, as there is little security in roosting on a reed stem if predators can walk out and grab you from below. Also in the event of a big freeze wildfowl will move to larger deeper waterbodies or to the coast.
As I have been writing this I have heard that six winter swans have flown over Otmoor Reserve and from their calls have been identified as Bewick’s. This is very pleasing as the species have not been recorded on the moor for several years. Worryingly they are becoming much rarer than they once were. They later landed at Pit 60 where they were filmed (see Oxon Bird Log) looking exceptionally beautiful.
I look forward to a gentle thaw and more water building up across the reserve as we move towards the year’s end.


It was a very grey, dull and damp weekend. The most irritating fine rain fell off and on, not heavy but enough to that mist optics, cameras and glasses. It was a quiet and unexciting weekend birdwise, we still lack the amount of open water out on the fields that will attract the normal spectacular numbers of wildfowl, Golden Plovers and Lapwings. 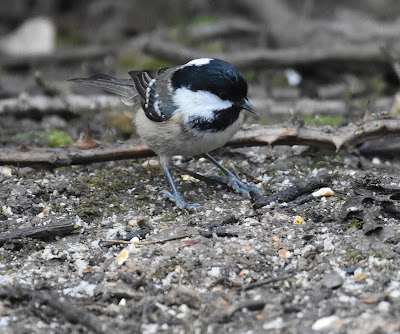 It was a weekend to find interest in the everyday birds that we often overlook and take for granted. There is, for instance, a corner of the car park where a small amount of food is regularly scattered. It attracts not only Robins, Blue and Great Tits but also a couple of Marsh Tits and a Coal Tit. A patient wait can be rewarded by superb close views of these slightly more unusual tits.
There is another rather more disturbing result of spending time carefully going through the small passerines at the feeders or beside the hide. You notice very quickly that there are a number of Chaffinches suffering from a disease that causes their feet to become deformed and grossly swollen. Some are so badly infected that they find it difficult to perch. I believe that the disease is called chaffinch viral papilloma. I read that it is not very contagious and is found in clusters. Advice from the RSPB suggests that these birds will not readily infect others and that in order to contract the disease a bird would need to have a nick or cut on its foot.
On a lighter note there is another Chaffinch that by the hide that attracted our attention. It is probably the same bird that was seen last year and was nicknamed the “Father Christmas” Chaffinch. It has a leuchistic patch below its bill and onto its breast that makes it look just a little bit as if it has a seasonal beard!
The numbers of finches taking advantage of the seed feeding beside the Hide is going up steadily. These numbers can fluctuate however, and it is not difficult to work out why when one takes a stroll up the footpath towards Beckley. There are a significant number of game strips in the fields on both sides of the path. There are broad weedy strips on three sides of one field alone and also we also have our own strip sown for wild birds, on the southern edge of the Closes. It means that there is a choice of places to feed and to take refuge when one of the Sparrowhawks is about. 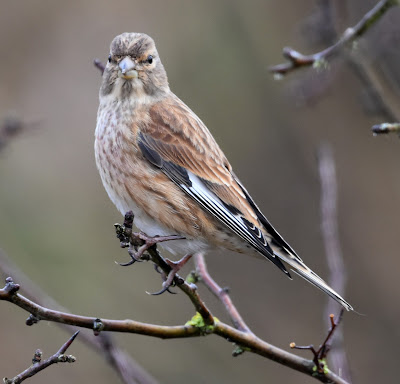 It is interesting to see the variety of birds taking advantage of the free handout. Wood Pigeons and Pheasants are not much of a surprise but there are regular visits from Moorhens, Mallard, Great Spotted Woodpeckers and on Sunday a Green Woodpecker. Corvids, notably three or four Magpies, also take the food. Three Yellowhammers and a Brambling were there on Sunday amongst the Linnets and the Reed Buntings.
At the screen there was little new to report apart from the first drake Pochard that I have seen on the moor for a while. The Kingfisher made several passes but the water was very turbid and brown and we wondered if it could see its prey through the water. I understand that some of the water from the reedbeds will be allowed to flow out onto Greenaways and then Big Otmoor in order to wet them up a bit more and make them more attractive to wintering wildfowl. This will also help to improve the water quality and help to counter the negative effects of having a very large number of Starlings roosting in and consequently defecating into the reedbed every night.