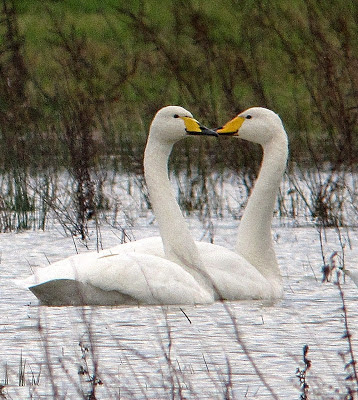 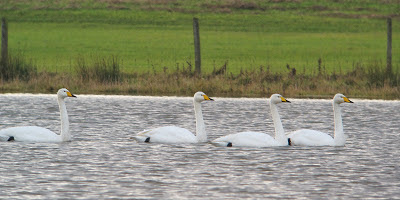 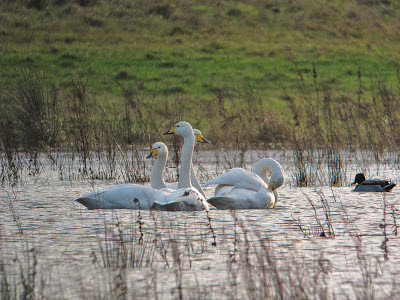 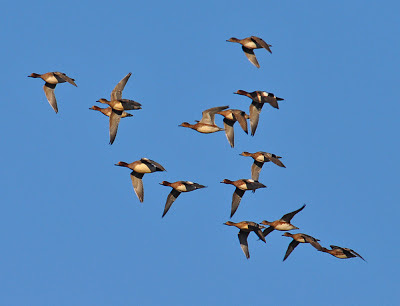 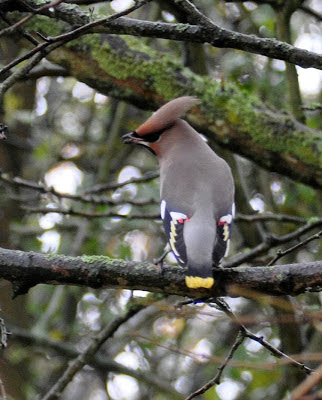 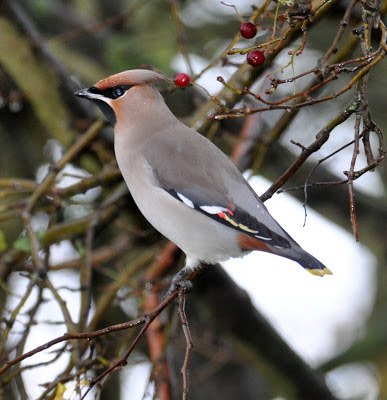 This weekend turned out to be much the same as the last in terms of the weather, with Saturday wet and miserable and Sunday fine but windy. On Sunday, after Saturdays rain, there was more water on Ashgrave in front of the hide than I can ever remember seeing there before.
It was a mixed weekend birdwise with the best birds turning up mid morning on Sunday when we picked up four Whooper Swans flying into the fields to the west of the path to the second screen. They later transferred to the flood on Ashgrave where they remained as it got dark. Although we first saw them at a great distance, there was no mistaking them. They are very distinctive and we did not have to see the lemon yellow on their bills to know that they were not Mutes. They have longer necks, a much more dynamic and economical flight action and they are much whiter than Mute swans, that look slightly creamy. (a bit like the comparison in the Daz adverts. For those of us that remember back that far!) There is some excellent video by Badger on the Oxon bird log of them socialising and dozing on the water in front of the hide.
Elsewhere there were large numbers of ducks flushing from the reedbed and higher up Ashgrave. Wigeon numbers seem about the same but we felt that we were seeing more Teal than in the last few weeks. Shoveller numbers have also risen recently. Two Pintail could be seen from the hide and two others were seen to fly over the screen and out onto the flood field. Two different Peregrines were around on Sunday morning a male and a large female, that spent a couple of hours sitting on posts in the middle of Greenaways, possibly digesting a Starling breakfast.
Redpolls are feeding in and around the carpark field and once again we saw Blackcap and Chiffchaff in the area around the bridge. At least thirty Chaffinches are feeding on the seed scattered by the cattle pens but sadly the bramblings have not been seen for a while. A small feeding party of Goldcrests gave particularly good views in the rain on Saturday morning. The Bearded Tits also seem to have moved on or are perhaps lying low in an inaccessible corner of the reedbed or in one of the small satellite reed clumps elsewhere on the reserve.
A phone call from Jon Uren just as we were leaving on Saturday morning summoned us to Marston, where we enjoyed catching up with a flock of twenty eight Waxwings feeding at the Oxford City football club. Watching these Scandinavian stunners feeding on haws at point blank range was just the tonic we needed to enliven what up to then had been a rather soggy and disappointing morning.
Posted by bark at 05:30 No comments: 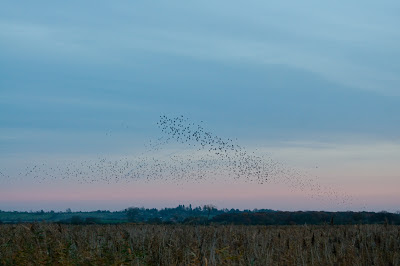 I have had a number of reports of the Starling Roost. It seems that it can vary in quality of display from the spectacular to a rather damp squib. What is predictable however at the moment, is the very large numbers of birds coming in to the roost at dusk. Current estimates suggest about 60,000 although they are extremely difficult to count. Attendant raptors are also predictable, including at least one ring tailed Hen Harrier, Sparrowhawk and the occasional Peregrine.
I would urge anyone planning to see the starlings to try to visit on a weekday evening. Saturday and Sunday are very busy indeed and parking is becoming a major issue. RSPB staff are being deployed to try to extend the parking available, so please do not obstruct the gateway,as with the gate open more parking becomes accessible. Car sharing where possible is really helpful.
I hope that the starlings perform for you should you visit, it is surely one of the best free spectacles available in the British countryside.
Posted by bark at 06:33 No comments: 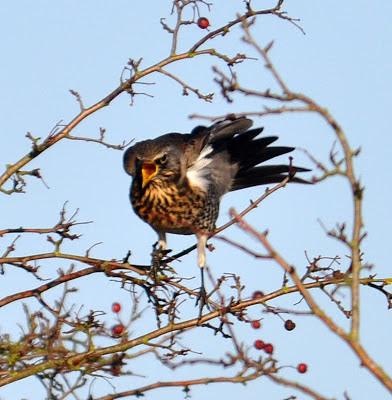 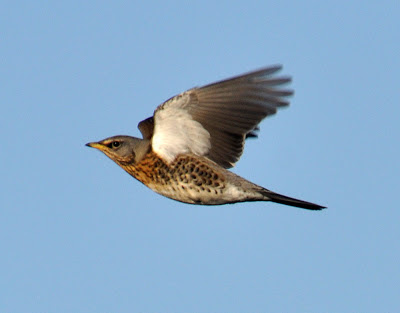 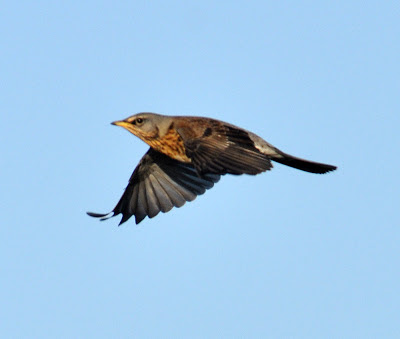 After a brief sojourn in the warm southern hemisphere, this weekends weather reminded me what the best and worst of winter can be like. Saturday damp grey and soggy and Sunday crisp bright and glowing with late autumn colour. It was a very “birdy” weekend with lots to see and enjoy.
On Sunday morning a Waxwing was seen in the carpark field near the feeders, it was heard a little later but sadly not relocated. This is only the second record that I know of for the reserve. It is no surprise that it could not be refound as there were at least three hundred winter thrushes continuously moving backwards and forwards between the hawthorn bushes and the shelter of the oaks along the Roman Way. They were predominantly Fieldfares, outnumbering Redwings by about four to one. They really are an early winter spectacle, subtly coloured like autumn itself, active and vociferous. When they first arrive they are very flighty and nervous but as the winter advances and the food sources begin to dry up they become much more confiding. There was another group on Sunday feeding in the hedge behind the second screen and with patience they approached fairly close and gave superb views.
The Hen Harrier was quartering The Closes on Sunday morning with a crow in close attendance and was later seen flushing Lapwings and Golden Plovers over Ashgrave. Several Stonechats could be seen including one male that sat on a reed stem in front of the second screen. Goldcrests could be found in most of the thick hedges but there was no sight or sound of the possible Firecrest reported during the week. a Chiffchaff sang briefly by the feeders in the sunshine on Sunday morning and a female Blackcap was seen in the same area.
Chaffinches, Greenfinches and a few Redpolls were feeding in front of the pumphouse on Greenaways but the Bramblings seem to have moved on. Last week Paul Greenaway saw and photographed a basking Grass Snake which seems a very late record for a species that hibernates. The Otters have been seen recently and there is a lot of signs of their presence. On Sunday morning we are fairly certain that we heard one calling as it swam along the ditch beside the bridle way on the way to Noke.
It is a massive change from eagles and elephants in the Kruger Park last weekend to Autumn colour and winter migrants on Otmoor, but nonetheless it is still good to be back.
Posted by bark at 02:55 No comments:

Male Kingfisher in front of the 1st screen 18th November 720p HD
Posted by Badger at 10:29 No comments:

A rather briefer posting this week as on Saturday we were defending our Birdrace title at College Lake Reserve in Bucks, against powerful local opposition, and on Sunday it rained solidly for the whole of my visit.
The Birdrace is held to raise money for Otmoor and for College Lake. Having entered for the first time last year when it held on Otmoor it seemed important to defend our title away from home on unfamiliar ground. We successfully held on to our title and look forward to the home match next year. College Lake is a delightful BBOWT reserve, which has excellent facilities and a range of different habitats. Most unusual sighting for us was a very late Swallow battling through the chill wind sweeping along the edge of the Chiltern escarpment.
Back on Otmoor Paul Greenaway found a Water Pipit out on the MOD land which is our one hundred and fiftieth species to be recorded on the moor this year. The Bearded Tits are still present being seen beside the path to the second screen. Hen Harrier is also still present, being seen on both days this weekend. Otter too has been seen from the first screen, often swimming along the main channel.
On Sunday morning I saw nothing but Canada Geese, Greylags and lots of rain. I will not be on the moor next weekend but hope that the weather will have improved by the time I get back down on the 17th.
Posted by bark at 03:08 No comments: