As is often the case at this time of year we seemed to have all sorts of weather over the Easter weekend. Bright sunshine on Friday, dull greyness on Saturday, sunshine and showers on Sunday and then a sunny afternoon after a ferocious storm on Monday. All accompanied by strong winds sometimes gusting to gale force.
The birds reflected this turbulence with both new arrivals and major departures. A week ago there were well over a thousand Wigeon feeding on the grass, this week we could only find about fifty out on the western edge of Big Otmoor. Golden Plover numbers have halved although that still means that there are approximately a thousand birds still there. They are split up into much smaller flocks and are more scattered about the site and the surrounding fields. They seem more restless and many more of them are moulting into summer plumage. We debated whether the birds that had already left had furthest north to go, where it might still be frozen or whether the birds that had yet to leave were waiting for a time when it might be more hospitable on their breeding grounds.
Last week we had our first record of Northern Wheatear. There were two Little Ringed Plovers found on The Closes on Friday and a couple of Siskins on the feeders, a bird that has not been recorded since the start of the year. The number of Oystercatchers present has risen to at least six with one pair out on Noke sides and four other individuals on The Closes and seen flying out towards The Flood.
Marsh Harriers have been very active and certainly three individuals and possible four were present over the whole weekend. They are ranging over the whole reserve and there were individuals hunting over the Closes and Ashgrave as well as the more familiar Greenaways and Big Otmoor. The Harriers appear to be targeting larger prey and frequently flush Teal and other wildfowl from the reedbed.
As well as a Chiffchaff calling in the carpark field there had been a “fall” of these birds on Sunday morning. We counted at least twelve along the bridleway between the pump house and the turn to the screens. They were not calling but were feeding, flycatching in the lea of the hedge taking advantage of the tiny flies that the sun had brought out. Also noticeable this weekend was the number of Cetti’s Warblers calling. Wiped out as a breeding species on Otmoor just a few years ago they have re-established themselves well and can be heard all over the reserve especially near the pump house and the first screen. 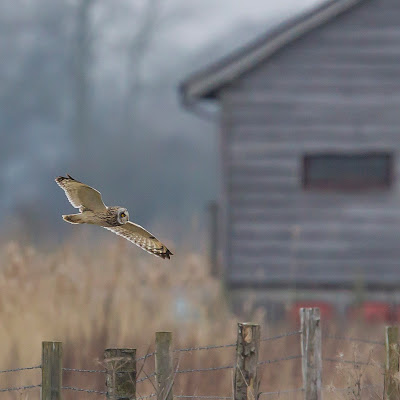 On Saturday morning was on the moor early and was fortunate to have some of the best views of a hunting Barn Owl that I have had for a while. It was working both the Carpark Field and the bridle way, sometimes using the strong wind to help it hover and at other times being bowled along by the wind like a white plastic bag. The regular Short Eared Owl is still being reported but will not be with us for very much longer.


Hares are particularly noticeable at the moment. Chasing around and occasionally boxing. More unusually I saw a Rabbit in the Carpark on Saturday morning, a species that seldom ventures down onto the moor where there is a likelihood of flooding.
On Saturday morning we found our first hirundines of the year with two Sand Martins beating their way across Ashgrave against the wind it will not be long before Swallows and House Martins join them on the year list, they have already appeared in the county.
This week we can expect more returning migrants perhaps our first Blackcaps, Willow Warblers or Sedge Warblers. It’s a very exciting time to be birding. 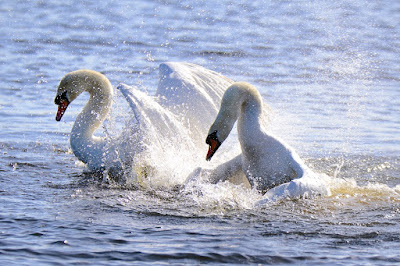 Back on the moor after two weeks and there are already further signs of spring including the welcome arrival of a pair of Garganey. They are one of the smartest looking ducks and all the better for being rarer and when they are here, elusive and difficult to see. They seemed to have adopted the reedy pool on the edge of the Closes, having been there for three days but have not been seen since Sunday morning.
Other new arrivals during my absence included small flocks of Dunlin, rather than the singletons that we have had so far, several Ruff have been seen and at least two Ringed Plover. There are plenty of suitable pools and scrapes, that will attract passage waders this spring. Amongst the most easily watched and most rewarding, at the moment, is the flooded area on the field to the left of the path as you head towards the second screen, Noke Sides as it is known. There is a “window” cut into the blackthorn hedge that offers shelter from both the birds and the wind. This weekend some of the several thousands of Golden Plover that are still on the moor were feeding and mooching on this field. They are really beginning to colour up now and developing their distinctive summer plumage. The Plovers were accompanied by non-resident Lapwings and at times a flock of seventeen Dunlin. The field and its scrapes are also popular with Redshanks and there were at least twenty birds there on Saturday and Sunday, calling and courting. There was also one lone Ringed Plover that could easily be overlooked.
The Golden Plover are very restless and easily spooked and at one time on Sunday when they had flushed from all parts of the reserve the sky seemed full of them. Flocks were stacked one above another flying in different directions sometimes in neat chevrons, sometimes in tight starling like flocks and at other times simply scattered everywhere. 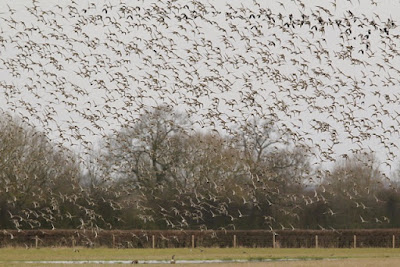 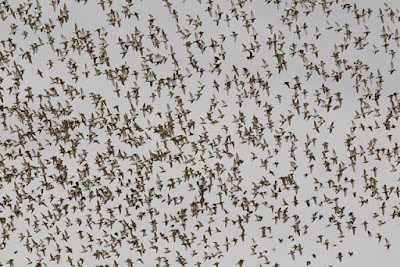 Grey Herons are breeding both in the reed bed and back again in the stunted oaks in front of the hide. The nest there has been extended and an “annexe” is now occupied by another pair. It was excellent to watch the progress of the young birds last time from newly hatched to fully fledged.

A Barn Owl was seen in the carpark field on Sunday and the Short Eared Owls both here and at other points around the reserve have been very obliging as they hunt increasingly in daylight. This is much to the delight of visiting photographers.
The finch feeding programme is continuing and is still pulling in a rich and varied number of seed eaters. A Brambling on Sunday was feeding on the main feeders and if it stays around for another couple of weeks should be in full bright summer plumage.
Resident Lapwings are tumbling and calling and as I write the RSPB staff are out looking for the first Lapwing nests. Snipe have started drumming and will probably do so for the next three months, they can also be heard “chipping” as can Redshank, after a little while it is possible to tell the two apart, the Redshank a bit louder, sharper and slightly slower than the Snipe.
A Chiffchaff was calling in the carpark field on Sunday and I had hoped to report the first Wheatear this week but as yet we have not found one. So something to search for next week.

Short video from the weekend please view at 720p HD
Posted by bark at 10:23 No comments:


No sooner than I start to mention spring, winter comes back and reminds me that it is not yet over. Saturday, the worst kind of squally, sleety and chilly day was in stark contrast with the early frost and then bright crisp sunshine that we experienced on Sunday morning.
The moor is still thronged with birds, Lapwings and Golden Plover are the most noticeable but wildfowl numbers must be at or about their annual maxima. They are spread over the whole reserve but Big Otmoor and the flood field would appear to hold the most. At one point, something like a Peregrine flushed a huge number of Wigeon from the flood field and it made a spectacular sight from the second screen. Pintail favour the western pools on big Otmoor and parties of Teal are scattered over the whole area. Shoveller too are abundant but evenly spread out, as are both Gadwall and Tufted Ducks.
On Saturday morning we walked to Noke, the bridle way is sticky but not impossible. It was worth it to have a careful scan over Big Otmoor from a different angle and for the large number of birds we found feeding on the short grass sheep fields adjacent to the farm. Not only Lapwings and Goldies but also at least five hundred Fieldfares and a smaller number of Redwings. The winter thrushes are now feeding on open fields having exhausted the food supplies in the hedgerows. There were also several song thrushes to be found out these fields. On our way back several Canada Geese flew over and we noticed a small dark goose with them. It was a Barnacle Goose that we later spotted out on Ashgrave. Despite its dubious provenance it is a really attractive bird and beautifully marked. Despite its size it can be feisty and is more than able to hold its own amongst the larger Canadas.
There are plenty of Snipe to be seen flitting up from one set of tussocks to another, landing and promptly disappearing it will not be long now before our resident birds start drumming. Redshank numbers have increased sharply with ones and twos being seen feeding around the edges of pools and scrapes. Their voices are also becoming part of the soundscape again especially their yodelling flight call. Lapwings are now separated out into the tighter more coherent flocks and what we must assume are “our” resident breeding birds. “Our” birds are spread out and occupying potential nest sites. They are starting to swoop and loop in their courtship displays. I even saw one pair mating. Another significant difference between the residents and the visitors is the way that they react to Kites. While whole flocks flush the territorial residents have started to fly up and attempt to challenge or mob the overflying raptors.
The Grey Herons are back nesting in the gnarled oak to the west of the hide, having abandoned the site last year. In previous years it has been great to watch their progress.
On Thursday some members of the RSPB staff who were carrying out an ecological survey flushed up a Jack Snipe, the first of this calendar year. It would be good to get one of these elusive birds feeding in the wet grass in front of the hide. 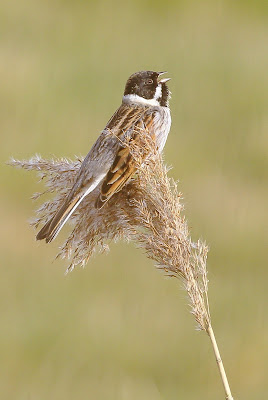 More and more male Reed Buntings are to be both seen and heard singing from prominent bushes and tall reed stems. Great Crested Grebes are also starting to get into mating mode and four individuals were on the southern lagoon on Friday. On Sunday two of them were carrying weeds and almost but not quite starting their courtship dance. 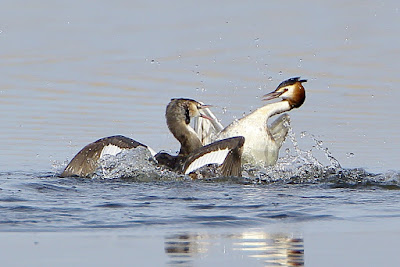 On Sunday at midday a Short Eared Owl was showing well in the Car Park Field. It was hunting in the eastern side of the field and seemed unconcerned by the number of people watching from the bench near the feeders. These birds are much more likely to hunt in the daytime now than they were when they first arrived. On Monday evening there were at least three individuals enthralling watchers across the whole area. 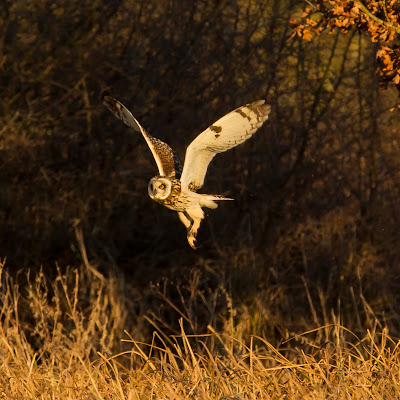 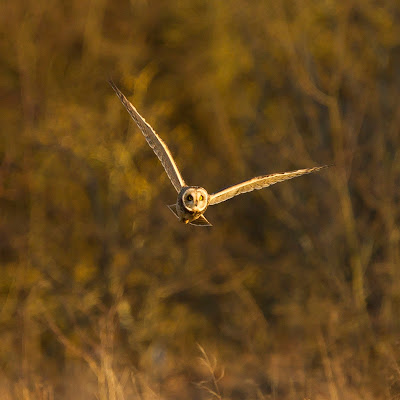