Autumn ,whilst not yet upon us, is certainly in the air and the comings and goings of birds reflects it. Blustery and showery at the weekend, the weather has now settled into something more like what one would expect for August. The turbulent conditions have got birds  on the move and we are seeing increasing numbers of passage migrants coming through.


Thirteen Wheatears feeding on a close mown field on the northern side of the moor was notable and they were still there the next day when I visited. There had been three Whinchats amongst them, but they had moved on by the next day to scrubbier areas. There were also reports of other Wheatears across the reserve in twos and threes, out on Greenaway’s and Big Otmoor.
Redstarts are popping up all over the place. They have been seen out at the Pill, in Long Meadow, in the fields to the north of the Hundred Acre and in the Roman Road. They can be both seen and heard and favour large isolated bushes and thicker taller hedgerows. A small party of Yellow Wagtails were spotted over Big Otmoor and their numbers will certainly swell over the coming few weeks. It is worth looking for them around the feet of the cattle.


At the first screen there have been regular reports of Black-tailed Godwits and one was present all weekend along with the usual Lapwings and Snipe. 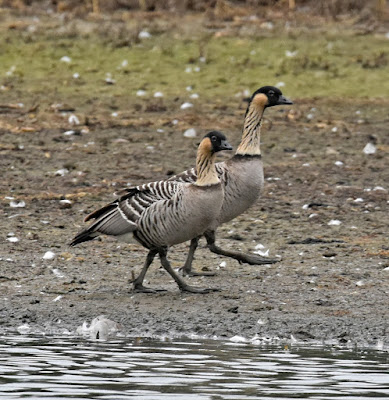 The most unusual visitors last weekend was a pair of Ne-Ne otherwise known as Hawaiian Geese. Once one of the rarest birds of all, down to less than fifty individuals in 1947, they were brought back from the brink of extinction by Peter Scott and the Wildfowl and Wetlands Trust. These two must have escaped from a collection or have become feral like many other wildfowl. They had no rings and behaved in just the same way as our other geese. They are very attractive birds and it is a victory for conservation that they are now free flying in the UK. Whilst we can’t count them, we can nonetheless enjoy them. 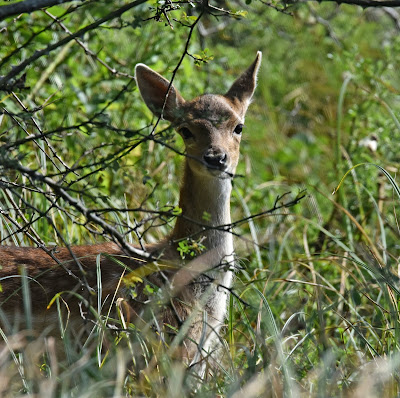 There are Roe Deer, Fallow Deer and Muntjac on and around the reserve. The latter being seen regularly in the carpark field and along the paths to the two screens. The larger species favour the wider open and more remote spaces but can often be seen feeding out on Ashgrave first thing in the morning. 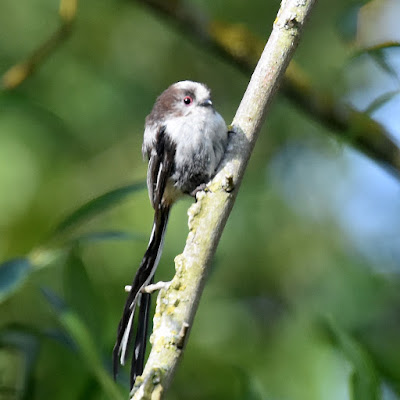 Our Common Cranes are still around and are most frequently seen on the north eastern part of Greenaway’s. It will not be  long now before they undertake their annual migration, all the way back to Somerset for the winter.


An unseasonably windy and stormy weekend. It was difficult to find any birds at all on Saturday it was so stormy! Small birds were hunkered down in the bushes and hedgerows, and difficult to pick out in the moving vegetation. At the first screen ducks are loafing about and are slowly undergoing their annual moult. Snipe are feeding along the margins, resting and preening among the dead reed stems. They can be difficult to see and if they flush en masse it is always surprising to realise just how many have been lurking, perfectly camouflaged and unnoticed.

On Sunday in the sheltered areas out of the wind, there were many mixed flocks of warblers to be found. On the path to the second screen Willow Warblers and Chiffchaffs were darting in and out over the brambles, along the bridleway Garden Warblers were feeding in the willows near the bench. 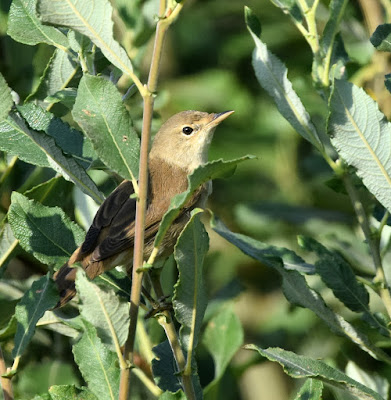 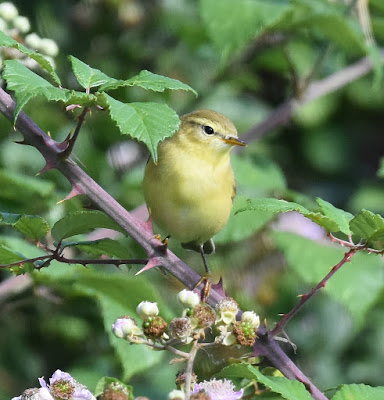 In the areas along the bridleway, that were cleared in the hedgerow rotation programme last winter annual weeds have sprung up in profusion, thistles, groundsel and willow herb have all set seed, Goldfinches, Reed buntings and Bullfinches are taking advantage of this abundance. Goldfinches in particular look to have had a very successful breeding season with a much higher proportion of juveniles to adults.

There are at least seven and maybe more Kestrels over and around the reserve a mix of  adults and juveniles. They probably represent two family groups one of which hunts along the hedge on the north side of Greenaway’s and out over the Flood Field and the other over Big Otmoor and Ashgrave. It must be the peak time for numbers of small mammals, and I have seen several Kestrels making off with little furry bundles in their talons. 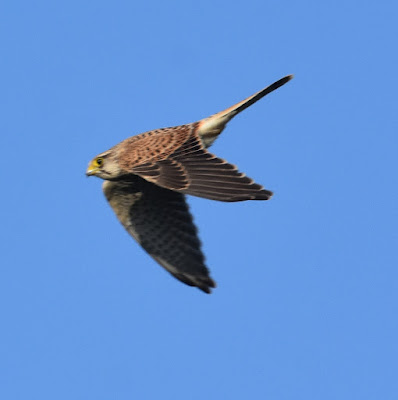 The young Marsh Harriers have moved away but the adult birds are being seen from time to time. The male is in primary moult and his wings are looking very scruffy and sparse. Peregrines are now being seen regularly over the moor, having been much more of an occasional sighting during the summer. 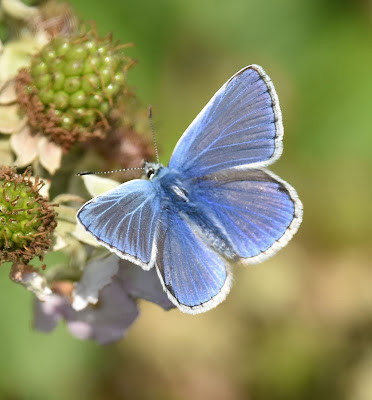 About twelve years ago we experienced a massive explosion in the population of Common Blue butterflies along the track to the second screen. Whilst not on the same scale as that bumper year, there are now many more of these small, attractive, brightly coloured butterflies to be seen along this path, than there have been since that unusual year.


On Monday several Redstarts were found out on the MOD land beyond the Pill and last week two females were seen in the vicinity of the Roman Road. 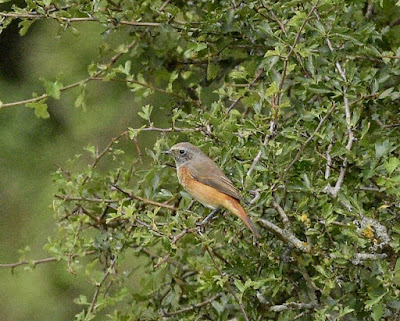 I went down too Noke in the hope of finding some Yellow Wagtails amongst the sheep but drew a blank. However, I did find a pair of Wheatears feeding from one of the fences near the farm, the first of this autumn’s passage. This was  pleasing, as their passage in the spring was very patchy. 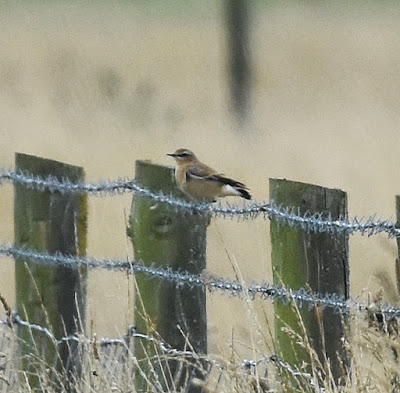 A hobby was swooping repeatedly over Ashgrave and clearly catching large dragonflies which are also now at their most abundant.

High Summer, and for the first time this year there is very little that is very new or different happening on the moor. The colours across the fields have changed subtly and the topping of the grasses has left stripes of ochre and green. The phragmites are starting to show their bronzy tasselled silky seed-heads in the reedbed and along the ditches. 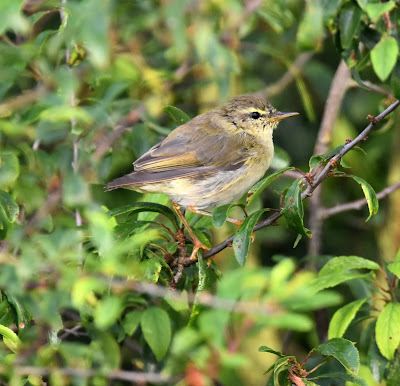 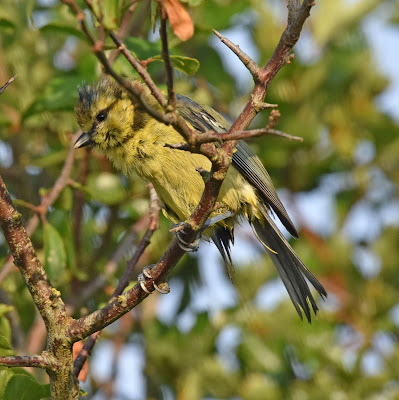 The numbers of small passerines are approaching their peak but are still being swollen by the addition second and even third broods.
The abundance of mixed parties of Tits and Warblers suggests that the weather pattern has swollen invertebrate numbers, which in turn  has meant that it has been easier to provision large broods. On Saturday we noticed a young Marsh Tit foraging along the bridleway along with a large number of Blue and Great Tits.


Wader passage is picking up, with the rapidly expanding mud in front of the first screen, it has usually been possible to find a Common or Green Sandpiper delicately picking flies off the surface of the mud and the shallow water. Common Snipe are feeding in the shallows and Lapwings are loafing about on the mudbanks having been feeding in the recently hayed fields on Noke Sides.
We are hopeful that we might find something a little more unusual in the coming few weeks, perhaps a Wood Sandpiper or Spotted Redshank. It would also be good to have a visit from Greenshanks; they were very scarce in the spring passage with just a couple of records. The pattern of weather over the next few weeks suggests that there will be frequent heavy and blustery showers, and these can force migrating birds down to rest and feed. 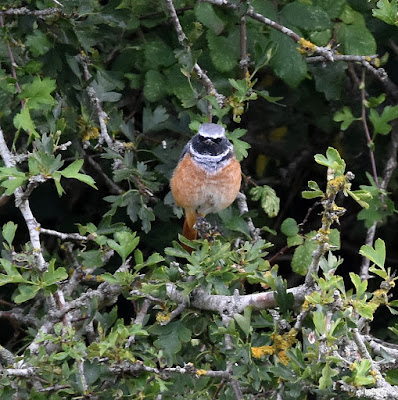 Our late summer Redstarts are around in the usual places and are just as flighty and elusive as ever, but as yet  we have not found any post breeding family parties of Spotted Flycatchers nor have we seen any more young Stonechats around the reserve. The cattle were feeding close to the hide on Sunday and we scanned carefully around them to look for Yellow Wagtails. 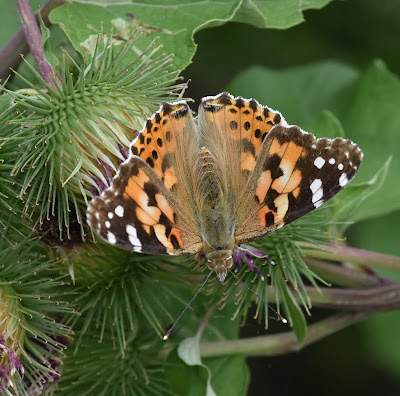 Each year as the summer progresses, we find a small flock that will feed around their feet and take advantage of the large numbers of flies that they attract as well as the other insects they disturb as they move through the pasture. For five or six weeks at the end of the summer Yellow Wagtails roost in the reedbed prior to their migration but they have not yet started to do so. We have yet to record Grey Wagtail on the moor this year, so there’s something else to look out for. 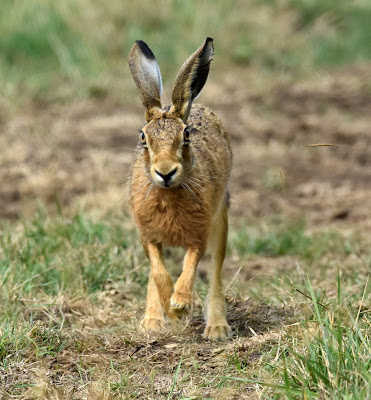 On Saturday morning a Hare almost ran into me as it wandered through Long Meadow realising at the last moment that I was there. I had already stopped taking pictures as it was too close! 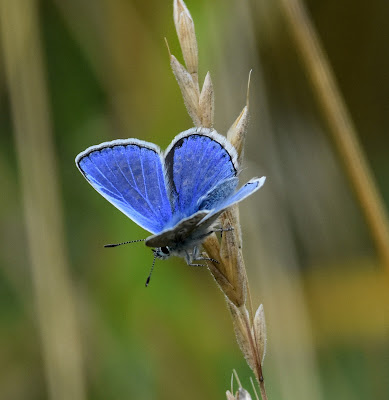 As predicted last week the Brown Hairstreaks are now attracting butterfly enthusiasts in large numbers. They can most easily be seen when they come down to nectar on thistles or brambles, the rest of the time they can be spotted flitting high around the top of their favoured ash tree along the Roman Road. In the same location it is possible, if you are sharp eyed, to find Brown and Rosel’s  Bush Crickets, the Rosel’s sporting their Nike sponsorship “swoosh” ! 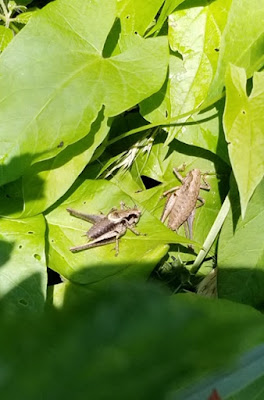