Still warm for October and increasingly windy over the weekend. I kept finding my attention caught by something flying out of the hedge only to realise it was yet another falling leaf!
There were plenty of interesting things to see although it was more difficult on Sunday as the winds began intensify and most birds were keeping their heads down.
The Great White Egret was very much in evidence and by Sunday had become very flighty, moving from area to area and occasionally feeding in the reed fringed ditch beside the bridle way, thus offering very close views.
In the first half hour of my visit on Saturday I saw Hen Harrier, Buzzard, Kestrel and Merlin. The latter, a female, briefly flashing past over Greenaways.
The Bearded Tits were seen briefly in the northern reedbed. Although we only saw two individuals the directions and the variety of the calls that we could hear suggested that there may very well have been more than the regular two.
There are at least seven Stonechats present with two pairs out at the Pill and another three birds along the hedge and ditch beside the path to the first screen. Large numbers of Fieldfares with a few Redwings are taking advantage of the abundant berry crop in the larger hedges. At times they could be seen being scattered across the sky like autumn leaves as they were flushed by real or imagined predators. Skylarks could be seen and heard all the time and the moor is currently hosting a significant number of them. Duck numbers are creeping up with a notable increase in Shovellers and a few more Wigeon. At least one hundred and fifty Lapwings are loafing on Ashgrave and a small flock of Golden Plover were seen.
Jack Snipe, seen during the previous week, was again found out at the Pill and several parties of Common Snipe were flushed from Greenaways by low flying Red Kites.
Ravens passed through on both days. An interesting sighting was a Tawny Owl in the willows along Otmoor Lane, seen at first light on Saturday morning.
After the storm of Sunday night who knows what unusual birds may have been blown in. There will be plenty to look for next Saturday morning when we take part in the annual birdrace, hosted again on Otmoor.
Posted by bark at 02:45 No comments:

Despite the occasionally inclement weather it has been a very “birdy “ weekend on the moor with lots of interesting things to see.
The Great White Egret is still present and seems to be favouring the ditches beside the diagonal track across Greenaways. It appears to vanish into the reed fringing and then reappears further up or down the ditch. It flushed this morning when the shooting started on the rifle range and headed out onto the north western edges of Ashgrave. We were fortunate enough to have excellent views of two Bearded Tits on Saturday morning. They came out of the reedbed and flew into the bushes and scrub beside the path to the second screen, where they were foraging until chased back to the reedbed by a very territorial Robin.
It has been a six raptor weekend (probably seven if the possible Merlin seen yesterday was confirmed). A superb male Peregrine sat up in a tree bordering the fields beside the reed bed, perfectly lit by the sun against a dark lowering sky behind. A Sparrowhawk was again sat out on top of one of the willow bushes growing in the reedbed. A Ring-tailed Hen Harrier was seen several times on Saturday and probably today, hunting along the hedge on the northern side of Greenaways. Kestrels are very noticeable along the paths and there is one individual that is allowing very close approaches and it seems to have an injury to its neck. It does appear to still be hunting successfully and may be feeding on the abundant hatch of crane flies across the grasslands. Kites and Buzzards are of course ubiquitous. The female Merlin seen on Friday and at other times last week had not put in an appearance by the time I left.
A Short-eared Owl was seen this morning being harried by corvids over Greenaways. As far as I know this is the first record from this winter period. On Saturday morning seven Ravens flew over cronking and doing aerobatic stunts. Their interactions did not seem to be aggressive but simply exuberant, without wishing to be anthropomorphic it must feel wonderful to be able to fly like that. It struck several of us that a party of seven Ravens did sound a little like the start of a Scandinavian myth or fairy story.
Three Stonechats could be seen along the path from the hide, several Yellowhammers were near the farm at Noke and a lone Wheatear was feeding out amongst a large flock of several hundred Fieldfares on Greenaways. There seemed to be a major movement of these Thrushes over the weekend accompanied by smaller numbers of Redwings and large numbers of Skylarks.
There is a Marsh Tit using the feeders again and several small parties of Redpoll were seen, often in flight. Duck numbers are increasing slowly as water levels begin to creep up.
A Clouded Yellow butterfly was found near the first screen almost certainly the last we’ll see this year.
There has been a major influx of Great Grey Shrikes in the east of the country and its not too optimistic to hope that we will get one on the moor soon to join the Short-eared Owls and the Hen Harrier.
Posted by bark at 01:09 No comments:

A brief posting as I only managed one visit to the moor this weekend. Sunday was a washout with rain almost all day. It seems churlish to complain about it as we have been experiencing close to drought conditions over the past few months and the scrapes and ditches have been bone dry. We will only get large numbers of wildfowl overwintering if there is sufficient water for feeding and secure roosting.
All day on Friday I had seen parties of Redwings passing over Headington heading west on the strong winds. I saw several groups of them over the moor on Saturday and notably my first Fieldfares of the year, a group of seven and later a singleton.
Finch and tit flocks are active in the hedgerows with a larger flock of Goldfinches feeding on burdock along the bridleway towards Noke. A loose flock of at least thirty Skylarks were very noticeable over Greenaways chasing around making their buzzy calls. There were also two individuals singing. A Chiffchaff was singing in the carpark field as I arrived and there were at least three other individuals along the path to the second screen. This is where we had a number of overwintering birds last year.
Lapwings are beginning to be seen in larger groups and one party on Saturday numbered over fifty. Although the Bittern was not seen on Saturday it had been seen flying from one side of the southern reedbed to the other on Friday morning. All I saw of the Bearded Tits was one individual briefly flitting over the top of the reeds and pinging. At this time of year we often have irruptive groups of Beardies and I hope that our resident birds are joined by some others.
Posted by bark at 09:45 No comments: 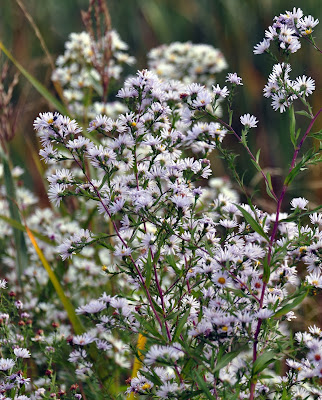 Back from my travels, I could not have hoped for a finer weekend on the moor. Early mist lifted to warm, golden October sunshine and the colours glowed in the hedgerows, while Michaelmas daisies made bright splashes of white, pink and purple along the edge of the reedbeds. There were plenty of good things to see on the bird front as well.
A Great White Egret found earlier in the week was still present on Saturday and showing well at times although it has not been reported since. Three Bearded Tits appeared in front of the first screen on Sunday. One of them was a male and may be one of the juveniles that has moulted into adult plumage, rather than a new individual. Three Stonechats could be seen along the path south of the hide along with a Whinchat. Other Whinchats were in the reedbed and the oaks beside the first screen. A Wheatear was found at the Noke end. Golden Plover were seen flying over and a real portent of winter were a party of seven Redwings, the first of this autumn.
Kestrels are currently the default raptor and there are at least four different individuals hunting over the fields. On Sunday morning as it warmed up at one point we could see at least seven Buzzards soaring over Greenaways and the reedbeds. A Garganey was on the southern lagoon with Teal on Friday.
Lizards can still be found basking by the first screen but I presume that they will soon start to hibernate once the weather changes and it gets colder. A northerly airflow is predicted for later this week along with much lower temperatures, perhaps the northerlies will bring some of our other familiar winter visitors, conditions all over the reserve this year look really good for Hen Harriers and Short Eared Owls.
Posted by bark at 07:31 No comments:

Sparrowhawk amongst the reedbeds 6th October filmed by Andy Last.
Please view at 720p or 1080p HD
Posted by Badger at 11:29 No comments:

October begins with a bang. 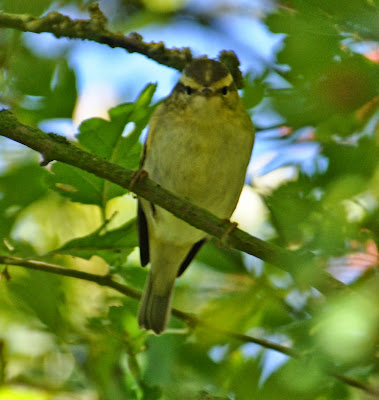 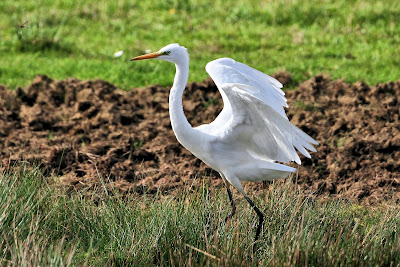 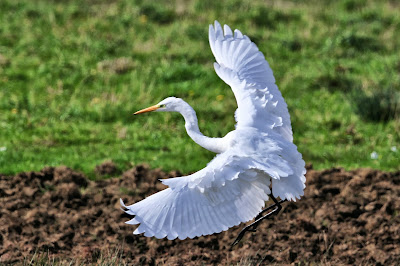 I turn my back on the moor for a couple of weeks and birds start to appear. Most notable is the Great White Egret that is currently on Greenaways and on Ashgrave. A Bittern is being seen regularly over the reedbed and a pair of Gooseander appeared last week. Both the Egret and the Gooseander are new species for the year and coupled with the Common Gull I found just before I went away our year list now stands at one hundred and fifty two. thanks to T.S. for the pics of the Egret and to Pat Galka for the one of the Bittern. I include a picture of a Yellow Browed Warbler photographed in Norfolk last weekend as I hope we will manage to track one down on the moor this week.
Posted by bark at 09:01 No comments: