Saturday and Sunday 26th and 27th May


I was astonished to see the change on the moor after a fortnight’s absence. The vegetation has shot up in response to first the wet and then the warmth.
Birds across the reserve were in great voice although I failed to hear Lesser Whitethroat which seems to have gone temporarily quiet. Cuckoos were very much in evidence with at least three individuals calling simultaneously on Saturday morning. Turtledoves are also purring along the bridleway and the roman road, they seem more difficult to see this year than previously but they may not yet have fully established their territories and their songposts. Sedge Warblers and Reed Warblers are very noticeable at the moment and one birder that I spoke to had recorded twenty calling Reed Warblers along the bridle way. With so many birds nesting it is clear why our Cuckoos are managing to hang on here, Reed Warblers being the species that Otmoor cuckoos parasitise.
Lapwings are continuing to mob any overflying raptors on Big Otmoor at least forty birds were engaging one Red kite in aerial combat. Snipe were drumming both mornings and excellent views can be had from midway along the path to the first screen, they seem to give up mid morning but can still be heard “chipping” from the field. There are excellent pictures taken by Roger Wyatt on the Oxon Bird Log.
Curlew, Redshank and Oystercatcher were on the new scrapes on Greenaways along with at least four well fledged Lapwing chicks. A Little Ringed Plover was on the scrapes on Big Otmoor. Up to four Garganey were seen on Saturday morning. Hobbies continue to put on a great display and now that there are increasing numbers of dragonflies on the wing they seem to be getting going a a bit earlier in the morning. There were still at least five feeding over the reserve on both days. There were many newly emerged Four Spotted Chasers to be seen this weekend as well as the earlier but less numerous Hairy Dragonflies.

A large Grass snake was seen swimming across the balancing pond at the Noke end of the bridleway, which offered good photographic opportunities.
Bird of the weekend for me was a Spotted Flycatcher seen by the dead elms along the bridleway. I heard that the Blagdon Squacco Heron has moved on and the habitat on Otmoor looks absolutely perfect for one, along with hundreds of other sites in the country I know............but I can dream. 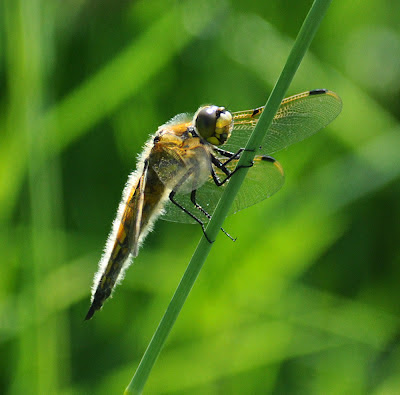 Saturday and Sunday 12th and 13th May 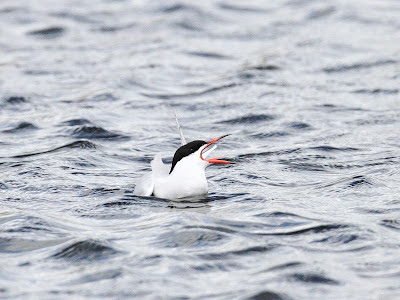 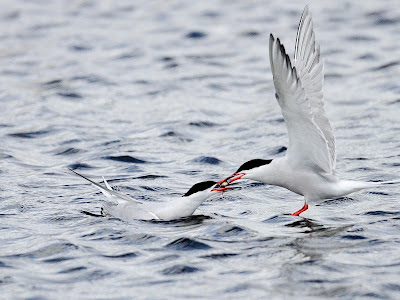 There were definite signs of spring this weekend although the wind on Saturday was still keen and chilly.
Warblers of all the expected species were taking advantage of the better weather to shout their messages from the hedges and ditches. Whitethroats are now back in really good numbers and making up for lost time. Sadly Cettis has not been heard for a couple of weeks and they seem unlikely to breed again this year although we still hope.
The moor outside the reserve is still holding a considerable volume of water. My BTO survey area, which takes in some of fields to the north of the reserve as well as the flood field was in part flooded and I was surprised to find a pair of Shelduck swimming around on what is usually a hay meadow. A pair of Garganey were in the paleo–channels of the flood field along with eleven Tufted Ducks. Although late the Green winged orchids have benefitted from the water and are looking wonderful in the fields to the south of Charlton. Turtle Doves are back but not yet in full voice unlike Cuckoos that are.
The flooded fields have attracted large numbers of gulls. They are principally Lesser Black Backs, Herring gulls and Black Headed and I assume that they are feeding on grubs and worms that have succumbed during the flooding. There have been two reports from different observers on different days of a large white winged gull, either feeding amongst them or being mobbed by them. The observers feel that because of its size it was most likely to be a Glaucous gull. Any other sightings of this bird or even better photographs would be really welcome. With the floods being as extensive as they are it is not easy to view these large shifting flocks an attempt to get out to the Pill yesterday was thwarted by water over welly tops!
Wheatears are still in evidence on the moor with three beside the hide and several others on Greenaways and the Flood. The pair of Common Terns continue to go through their nuptial displays, as the superb sequence of pictures by Pete Styles shows (viewable on the blog.) Skylarks seem to be the default bird on the moor at present and on the surrounding fields, there is no time when you cannot hear them singing, a continuous element of the soundscape.
Hobbies were spectacular on both days with at least fifteen hunting over Greenaways and the reed bed on both days. Some perching out on fences and gates and giving really good views. A Marsh Harrier was seen again this weekend but is not spending much time around the reedbed and may be roaming over the wider area of floods.


The Wood Sandpiper first seen on Monday was still present and viewable from the hide yesterday evening. Hobbies were seen in good numbers feeding over Greenaways in the afternoon. At least one was sen to have taken a red damselfly the others were feeding on the abundant St Marks Flies / Hawthorn Flies /dangly legged flies ?? A pair of Ruddy Shelduck are spending time between the flood on the hundred acre and Greenaways.Two Oystercatchers have flown in and are the 134th species to be seen this year. Better late than never!
Posted by bark at 02:57 No comments:

Saturday and Sunday 5th and 6th May 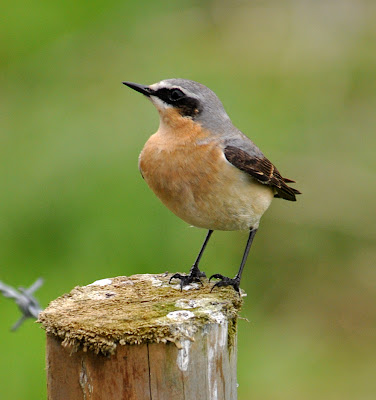 Wheatear in front of the hide


Still not the kind of weekend that you would normally expect at this time of year, cold, windy and damp. But most of the birds that we have been waiting for are now back.
Turtle Dove was first seen at the Noke end of the reserve on Thursday and there was a brief snatch of song heard on Sunday morning. All the Warblers are now in and singing, albeit in a rather tentative way. Cettis was heard along the bridle way midweek by one of the reserve staff, we are hoping that it will soon find a mate and start to repopulate the moor after a couple of years absence.
Wheatears have continued to be present in large numbers and there were at least twenty present on Saturday, on Ashgrave in front of the hide, by Lower Farm Noke and on the field to the south of the Closes. On Sunday morning as the wind came round to a more southerly direction, a party of ten were seen to move north along the hedgerow adjoining the reed bed. It does support the idea that they have been held back over the last four weeks by adverse conditions and headwinds.

Three Whinchat were feeding from the hedge and the fence around the northern edge of Big Otmoor they are so much brighter and colourful at this time of year but stay only briefly. There are now two Marsh Harriers being seen regularly over the reed bed one of them is certainly a mature female but as yet we have not had a clear id. of a male. Hobbies are now present in good numbers with at least thirteen being recorded hunting over Greenaways on Sunday afternoon (per Steve Roby). At least three and very probably four Cuckoos were present most of the weekend calling loudly and making display flights.
Despite the increase in water levels we do not seem to have attracted many passage waders. There was a Whimbrel on Big Otmoor on Saturday, a Greenshank on Ashgrave both days and Snipe are continuing to drum and chip over Greenaways. There are also a pair of resident Curlew on Greenaways taking offensive action whenever they are overflown by raptors or corvids. A Red Kite sailing over big Otmoor now prompts a major scramble by Lapwings, that attempt to drive it out of their airspace.


Two Common Terns were on the northern lagoon carrying out courtship behaviour the male presenting the female with a small fish and the two displaying on the ground. Perhaps they will manage to breed on the reserve this year rather than off it, as they have done in previous years.
There were large numbers of mixed hirundines and Swifts feeding over the reserve on both days this weekend. A flock of at least three hundred Swallows were feeding very low and slowly over the flooded field at the edge of the path to the second screen. They were flying into the wind and very close to the water, they seemed to be picking insects off the surface. They would work the length of the field and then fly rapidly back to the other end and then start again. Every so often they would take a rest and settle en masse in one of the hedgerow trees affording excellent views.
Warm and settled weather is what is required now so that breeding can really get under way and the first dragonflies can start to emerge. 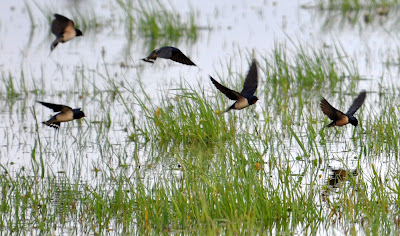 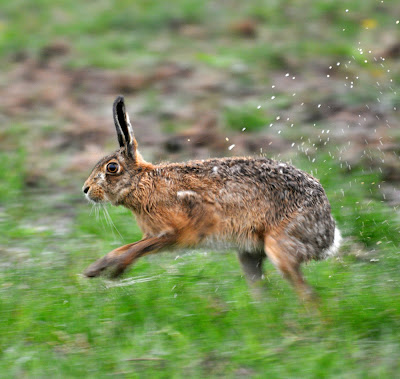 
It seems that I missed a good evening on the moor yesterday as this e-mail from Steve Roby describes:

"The moor was alive with bird song yesterday evening. As you know lots of warblers are in now and we had good views of most species.
Pete and I saw 4 Hobbies although some visiting London birders reported 5 (plus 2 Marsh Harriers and a SEO not seen by us).

Still at least 9 Wheatear with a single Whinchat alongside 4 of them on Ashgrave.

The male Garganey was on big otmoor, 4 Little Egret on ashgrave and a dozen or so Swifts over the reedbed. At least 2 Cuckoos were calling and flying about.

Another visiting birder had seen a Redstart drop down greenaways. A Snipe was drumming over here too and there are quite a few Lapwing chicks marching about, mainly on big otmoor.

With a little soft evening sun thrown in it was a very pleasant otmoor evening. "