Not a great weekend with cool, showery and windy days sandwiching another massive deluge on Saturday night.
There is very little new to report. A Grey Wagtail was seen from the hide on Saturday morning and there are now two Common Terns using the tern raft in front of the second screen.
I saw at least five Turtle Doves on Sunday. With patience they can be seen on the stock corral, sometimes feeding on the ground. We are putting down a fine seed mix for finches and buntings there and there is obviously something in the mixture that they like. On Sunday a male Peregrine was patrolling over Ashgrave and The Closes.
It was difficult to see many Dragonflies or Butterflies while I was down there, as the weather was not at its best for flying, but it was possible to find several Grass snakes basking in the car park field whenever the sun did come out. Surely summer must happen soon.


Very strong winds and showers on Saturday gave way to more sunshine and calmer weather on Sunday. As a consequence there was much more to be seen on Sunday.
Sadly the Corncrake has either left or given up calling, it was a wonderful sound to hear. There has been some speculation that it might have been one of the Nene Washes birds that has relocated after flooding.
A Black Tailed Godwit on Saturday morning was surprisingly the first one on the moor this year and takes the year list up to 140 species.
On Sunday there seemed to have been a mass emergence of Four Spotted Chasers, there were at least four Hobbies catching them and putting on a spectacular show over Greenaways from late morning onwards.
A Grasshopper Warbler has taken up residence along the path to the first screen and could be heard reeling even by those like myself who are harder of hearing than we used to be! It was very difficult to see but just occasionally showed flying into the hedge. A juvenile Peregrine was seen over the reserve on Sunday morning. Although they have not taken to the tern raft yet there were Common Terns feeding around the reed bed Lagoons.
Other Dragonflies are now on the wing and I was sent a picture of a newly emerged Black Tailed Skimmer, taken along to path to the first screen. When peering into the ditch beside the pump house looking for dragonflies, it was possible to see a large shoal of red finned fish just below the surface, presumably Rudd or Roach. It was encouraging as we had feared that the drought might have depleted fish stocks.
Butterflies and dragonflies will offer most variety over the next four of five weeks until the first waders start to return, at least when they come they will have plenty of places to feed.

The last Corncrake to be heard and of course never seen on the moor, was first found on the 30th May 1999. It called for a couple of weeks, stopped calling and then started again until the 7th July. It was said that this behaviour was that of a breeding bird but no confirmation was possible.
Thanks to badger and Gnome for the audio visual. It has been calling much nearer to the bridleway than the 1999 bird.
Bark
Posted by bark at 00:28 No comments:


The weekend offered a brief respite from the summer monsoons with Sunday morning being the sunniest and calmest that I can remember for over a month. Things have started to settle into a quieter summer pattern, there are still birds singing but many are now feeding young and foraging busily. There were still two Grasshopper Warblers reeling in the carpark field but with the foliage now so dense it was impossible to spot them. The Garden Warblers and Blackcaps in the Roman Road gave me yet another opportunity to separate their songs and I know that I will have it fixed by the time that they stop singing, and next season have to learn it all over again! On Saturday Quail were calling from both the Closes and from the field just to the South of the Closes suggesting at least two birds, however we failed to hear them on Sunday. A Tawny Owl was seen on Saturday in the oaks along the Roman Road, an area where they have frequently been heard calling and where three juveniles were seen last year. Little Ringed Plovers were again on the Big Otmoor scrapes, as were two Dunlin. At least eight very small Lapwing chicks were around the scrapes and there were calling and agitated Redshanks all over Big Otmoor that were clearly monitoring chicks in the grass.
In the calm sunshine on Sunday there were many damselflies along the bridle way of several different species, offering an id challenge, certainly some were Red eyed Damselflies but there may be other kinds that also have red eyes.....its time to get the Lewington out again. I can however confirm at least three Downy Emerald Dragonflies in the area to the east of the pump house for the third year running along with a Hairy and many Four Spotted Chasers. There were in fact lots of different and interesting invertebrates to be seen in amongst the lush vegetation and nectaring on the flowers, it is that time of year when looking carefully, closely and and on a different scale can provide fascination, variety and beauty. 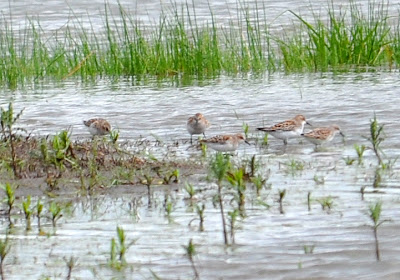 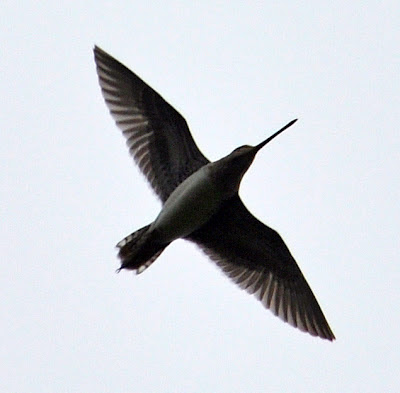 Only two days on the moor this weekend despite the three day holiday. Sundays weather proving to be a complete washout.
The new scrapes that were made on Big Otmoor last autumn are really beginning to attract waders. They are shallow and have muddy and not reedy margins. Birds of the weekend were the party of six summer plumaged Little Stints That were there from Saturday afternoon until at least yesterday evening. In the past Little Stint records on Otmoor have been of autumn passage individual juveniles. It was a treat to see such brightly coloured birds working the margins like clockwork toys accompanied on Monday by a summer plumaged Dunlin. It was possible to get a clear sense of just how small these birds are when they were chased away by the resident Little ringed Plovers. The Little Rings were also having problems with a party of six Ringed Plovers on Saturday, clearly seeing them as a threat to their chosen breeding area. As well as these three species Curlew came in to bathe and well fledged juvenile Lapwings skulked around the edges. There was also a group of at least seven newly fledged birds on Ashgrave. Snipe continue to drum over the path to the first screen with three birds at times taking part in the display.
Elsewhere Linnets seem to be the most noticeable birds in the hedgerows with a number of juveniles feeding by the cattle pens. They seem to be having a much more successful year on the moor than I can remember.
Cuckoos, Turtle Doves and Warblers are around but a little subdued by to weather. On Monday a Hobby was seen chasing a Skylark, dragonflies not being so active and evident because of the cold.
On Monday morning as I was walking along the track in the carpark field I saw something white bouncing along the track ahead of me, it turned out to be a stoat and it was carrying a ping pong ball sized egg in its mouth. It was so preoccupied with taking its food back to its den it got very close before the sound of my camera scared it into the hedge. It was probably a Coots egg and clearly was being carried a long way from the water. There is always something new to see on Otmoor.
Posted by bark at 02:51 No comments: