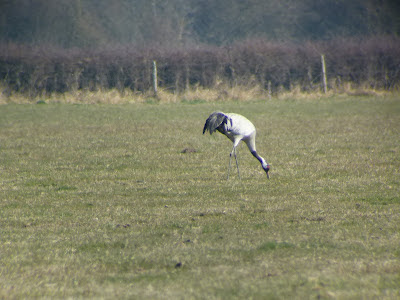 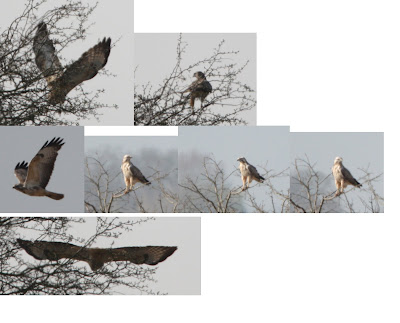 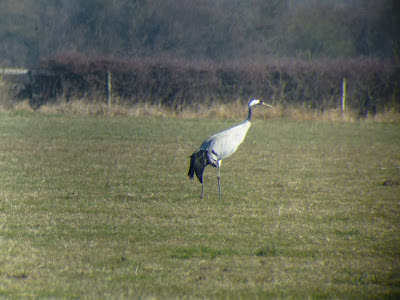 Another pic of the Crane on the 100 acre. (c) Paul Greenaway
As can be seen from the tracking done by Jason with the use of his pager the Cranes that over- nighted on Sunday into Monday were very much bed and breakfast birds. It seems that they were taking advantage of the fine settled conditions to make a long journey. Nonetheless it was great to have them on the moor.
I have also posted a composite picture of a very pale morph Common Buzzard that may have confused one or two birders as it seems to look as though an Osprey had a liaison with a Harrier but retained a buzzards structure and proportions. Ian Lewington says that in the south of the county pale birds outnumber both the dark and the intermediate forms. Many thanks to Matthew OByrne for sending me the picture.
Posted by bark at 05:06 No comments: 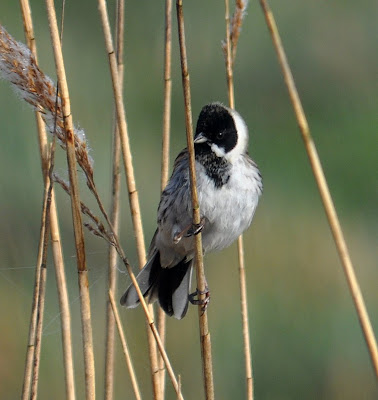 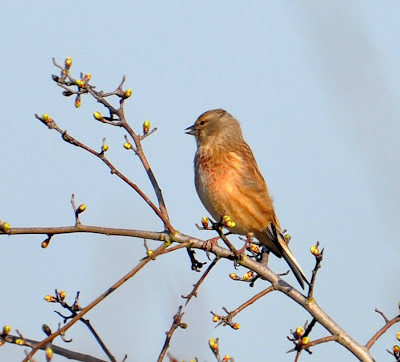 Linnet back on territory 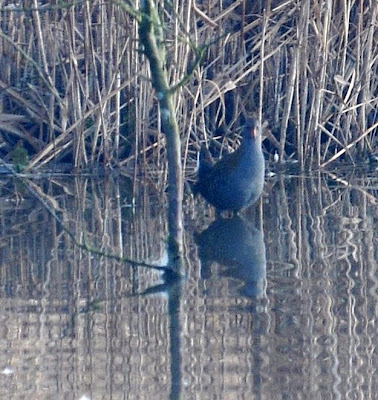 Water Rail in the mist 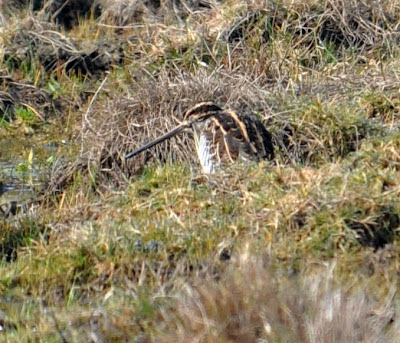 Snipe in front of the hide. 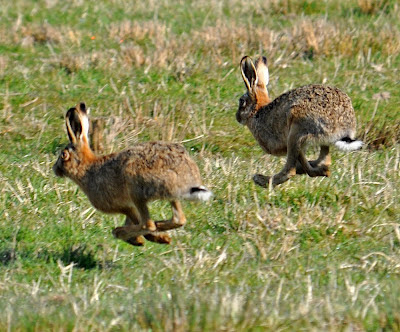 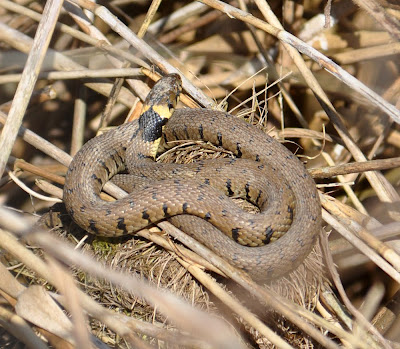 Snake in the grass. All Pictures (c) P. Barker
After a cold and foggy start on both days the sun came out and it was calm and warm.
Undoubted highlight of the weekend was the brief visit on Sunday evening of three Cranes. They had been seen passing over Farmoor ten minutes earlier and two of them set down on Greenaways while one circled overhead they flew again just a couple of minutes later and were last seen heading in the direction of Horton. They seem to have become almost annual visitors over the last few years.
On a slightly more mundane level there is a Little Ringed Plover on the scrapes in front of the hide and still good numbers of Wigeon on both Ashgrave and Big Otmoor. For the last few weeks the most noticeable and vocal small bird in hedgerows and scrub has been Dunnock. This weekend however, I have noticed Reed Buntings more than other species, singing and displaying, especially around the ditches and the reed bed. Both Lapwings and Redshanks have been very vociferous and flamboyant displaying and mating particularly on big Otmoor. Linnets are again setting up territory along the path between the screens where they bred last year.
The warm weather has brought the Grass Snakes out in force and we counted ten along the bridle way sunning themselves on Sunday morning judging by the number of frogs and toads around they will have no trouble in finding food. Hares continue to behave as March hares are supposed to, although not in the numbers and manner that I had photographed earlier in the week. No new warbler species in yet but with the first sedgie turning up at Farmoor this weekend it shouldn’t be long until their manic song is blasting out from the ditches.
Posted by bark at 01:42 No comments: 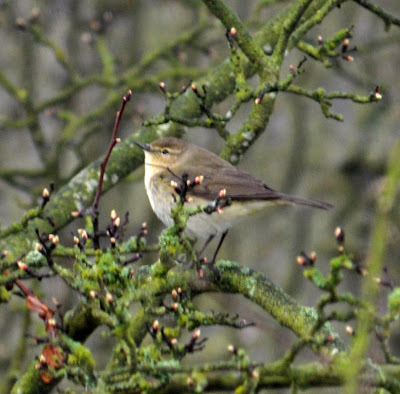 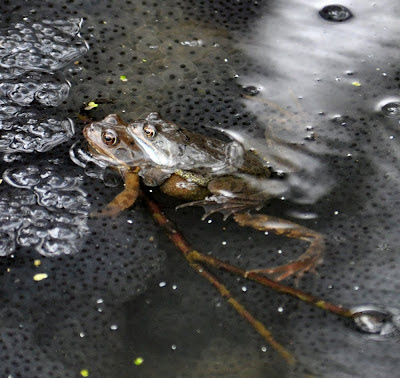 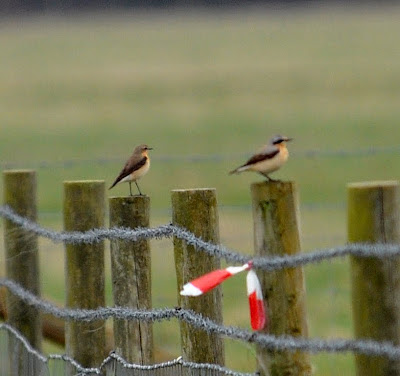 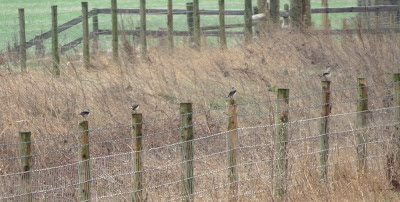 It is very gratifying when nature does what you have predicted or to be more honest made a lucky guess at. Both Wheatear and Sand Martin appeared this weekend on schedule and as we walked back to the car park on Sunday morning I jokingly said “it’s about time we had a Marsh Harrier” and one duly appeared in the afternoon!
The Wheatears were very bright and fresh there were at least nine on Saturday and at least seven on Sunday mostly on Ashgrave, they were predominantly males with just two females. The Sand Martin was seen on Sunday morning. The fourth addition to the year list was a Collared Dove flying along the bridle way. Chiffchaffs were very much in evidence with one or two of them singing and others feeding along the hedgerows.
The Short-eared Owls are still present. On Sunday morning a low flying Kite flushed four from Greenaways that flew round for half an hour being harassed by corvids. Merlin was seen both days, the bird on Saturday was a male. There is a large number of Meadow Pipits around and this must be what is sustaining the Merlin.
There is still a flock of about fifty Golden Plover on Big Otmoor and there were a Dunlin and a Ruff with them. There are huge mounds of Frog Spawn in some of the ditches lets hope that they stay wet long enough to turn into frogs and toads. An Otter was seen on Saturday morning by the pump house bridge on Greenaways and then crossing the bridle way.
Whitethroat, Sedgie or Willow warbler next Weekend?
Posted by bark at 01:53 1 comment: 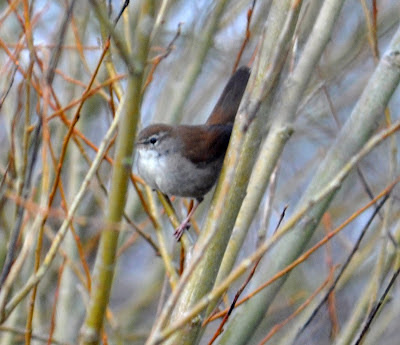 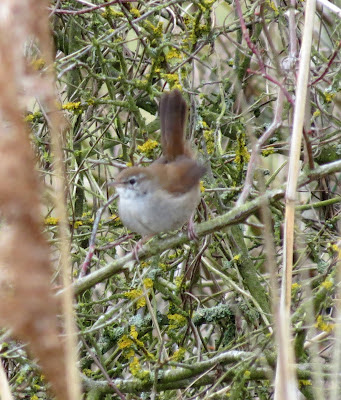 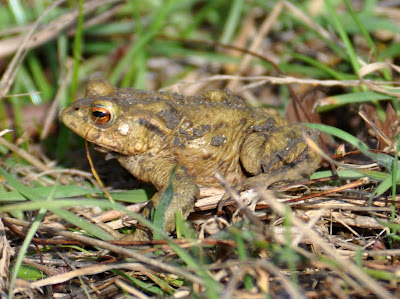 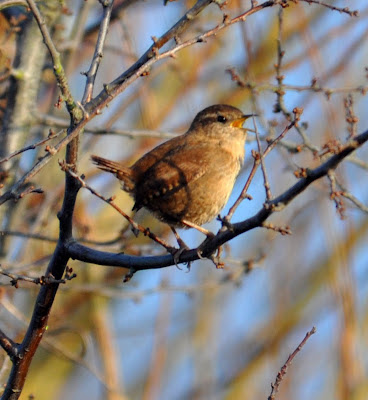 Wren singing. (c) P. Barker
The moor was alive with birdsong this weekend as resident birds started to get on with the serious business of finding mates and setting up territory.
Most obvious among them were the Lapwings calling and displaying over all the main fields. Some of their flights would put stunt fliers or crop dusters to shame it is amazing that they don't ever seem to lose control in their headlong rushes towards the ground, never stalling and always pulling out of their dives at the last moment and yet still calling the whole time. The Cettis Warbler that has taken up residence near the path to the hide and the screens was behaving in a very non Cettis like way. It appeared frequently in the bare bushes and gave excellent close view although it was still very mobile and difficult to photograph ( our best efforts can be seen on the otmoorbirding blog).
The transfer of water from Ashgrave to Big Otmoor has been very successful and has resulted in the flooding of the two very large new scrapes that are viewable from the bridleway. There were at least ten Redshanks taking advantage of this new feeding area and two Dunlin. There is still water in front of the hide and any rain that falls will drain down the hill and make good any shortfall. A Ruff was with almost a hundred Golden Plover further out on Big Otmoor. Curlew can be seen in flight and displaying over the reed bed and there are probably between twenty and thirty of them present at the moment. There are some excellent shots of them taken by Nigel Forrow on the Oxon Bird Log.
Two different Bitterns were seen on Friday and although I didn’t hear of any other sightings over the weekend it is quite likely that they are still there. ( per Nick Truby) Redpolls and Goldfinches continue to show well on the feeders and a Yellowhammer was singing from the regular spot in the Carpark Field.
A Grass Snake was seen swimming in one of the ditches and there a number of amphibians on the move. Coltsfoot is blooming along the bridleway and the first Blackthorn is out in the Carpark field.
Sand Martins and Wheatear next weekend?

I have just received an E-mail saying that a Chiffchaff is singing in the car park field (per Roy Jackson)
Posted by bark at 03:23 No comments: 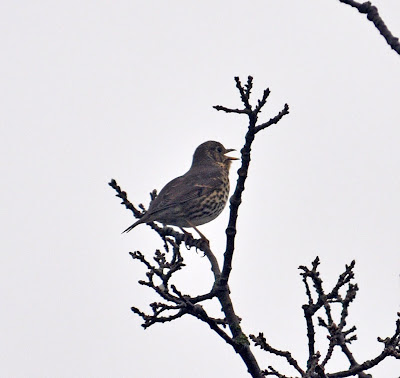 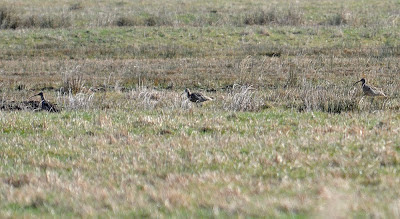 Curlew on Greenaways (c) P. Barker
New birds are continuing to be found and this Saturday we saw our first Common Sandpiper of the year. There was also a Green Sandpiper on the northern reedbed. Duck numbers , particularly Wigeon have risen steadily and at least two hundred were feeding from the pools on Ashgrave in front of the hide. Several flocks of Golden Plover can be found on Greenaways, Ashgrave and Big Otmoor and Lapwing numbers have also shown a steady increase. Many of them are starting to display both on the ground and in the air and there were several fierce aerial dogfights going on in front of the hide on Saturday morning. I assume they were males competing over a female. There were at least eight Curlew on Greenaways on Saturday and today there were six, as usual with these birds they seem to feed most often in the tussocky area closest to the reedbed.
The Short–eared Owls are still in residence and the people carrying out the hare survey flushed five from the longer grass areas on Greenaways on Saturday morning. They were apparently hunting over the edges of the reed bed on Friday evening with one individual perching on the screen. Merlin was seen again last week chasing and catching a Meadow Pipit in front of the hide. Sadly the Bittern has not been seen this week....unless someone knows differently. Four Little egrets were present on Saturday and as the water levels start to rise we should see more of them providing there are fish for them to catch.
A Ring necked Parakeet was photographed in a Noke garden last week and so becomes the first record for Otmoor , not yet on the reserve list but I doubt whether it will be long.
Sundays rain was very welcome and hopefully there will be more to come this week, the new scrapes are beginning to look very promising and should start to attract more waders. Not long now to the first returning migrants, I can’t wait.
Posted by bark at 09:26 No comments: