There were plenty of birds to be seen on the moor this weekend, once the early morning greyness and chill had lifted. It was very gratifying to hear that last weeks predicted Whinchats had turned up only a day after I wrote about them. The birds on Tuesday were out on the MOD land by the Pill, this weekend there were two by the farm at Noke and another juvenile along the path to the first screen on Monday. The birds at Noke were keeping company with a juvenile Wheatear, the first on the reserve this Autumn. Spotted Flycatchers have been seen again regularly, both off the reserve and in the carpark field, hunting from the wires. Redstarts too are still present, with at least three on Monday.
There is a flock of at least fifty Yellow Wagtails feeding around the feet of the cattle on Ashgrave. There are both adults and juveniles and most are in various stages of moult and rather varied plumages. They showed particularly well when the cows were feeding just below the hide on Sunday and they all flushed up onto the roof and the screening when a raptor flew over, allowing great photo-opportunities. There are a resident party of seven Little Egrets still finding food in the diminishing water in front of the hide, at least thirty eclipse Teal were there and a couple of Green Sandpipers came and went, as is their wont. Turtle Doves are still present and a pair of adults and a juvenile have been seen feeding in an Oddington garden. They may or may not be the breeders from the reserve.
There are now certainly two and possibly three Marsh Harriers on the moor. One of the individuals looked significantly different to the one photographed last week by T.S.. A Peregrine put in a brief appearance, three Hobbies were hunting actively along the northern edge of Greenaways all Monday morning and a Sparrowhawk passed over the reedbed.
At least seven Wigeon were on the northern lagoon on Monday, they may be the birds that failed to head north in the spring rather than the vanguard of the returning winter migrants.
When the sun shines there are plenty of butterflies to be seen and the relative abundance of the Brown Hairstreaks is attracting enthusiasts from considerable distances.
Posted by bark at 04:59 No comments:

A great find by Otmoor regular Paul Greenaway yesterday afternoon. This was the first record for  a couple of years, once or twice when they have been seen late in the day they have roosted nearby. Yesterdays bird seemed to be drifting steadily eastwards.
Also attached one of the excellent Spotted Flycatcher pictures from Derek Hales taken at the weekend.
Posted by bark at 01:07 No comments:

Redstarts were the first of our return passage migrants to arrive, with at least seven being seen on Sunday and at least six this morning. They are a mixture of adults and juveniles and are in different stages of moult. They usually stay around for several weeks feeding up and changing their feathers, before heading south. With them on Saturday morning was a Spotted Flycatcher the first one to be recorded on the moor this year. This is our one hundred and forty-sixth species on our yearlist which has been moribund for over a month. Congratulations to Joe Harris the warden on his TV appearance last week we are justifiably proud of our Turtle Doves. It is good that local television is able to highlight the plight of these beautiful birds and to celebrate our success on Otmoor in giving them somewhere to breed.
A smattering of waders were present including both Ringed and Little Ringed Plovers and Green Sandpipers. Three large flocks of Lapwings were present, each of over two hundred individuals. These are not large flocks by winter standards but are significant and unusual at this time of year. A Marsh Harrier continues to put in sporadic appearances over the reedbed and a Peregrine spooked everything from Ashgrave on Saturday.
Invertebrates are currently attracting many admirers, especially the rare Brown Hairstreaks but they have now been joined on the wing by Brown Argus and Small Coppers to swell any daily butterfly count. After such a desperately cold and unpromising spring it is great to see so many on the wing and it bodes well for breeding success and the promise of good numbers again next year. Peter Law found and photographed an unusual and uncommon variant of Blue-tailed Damselfly on Sunday by the large bramble patch on the corner of the path past the first screen. This is rapidly becoming an insect watching hot spot and is also a good place to find and see warblers and other small passerines. The other popular spot is along the Roman Road and has the additional bonus of regular Brown Hairstreak sightings.
This week it will be worth looking carefully at the farm fence at Noke and out by the bridge at the Pill, as these are the places that usually host the first returning Whinchats, Wheatears and Stonechats.
Posted by bark at 07:19 No comments:

Another quiet weekend but with a few interesting diversions.
Waders are beginning to drift through with a couple of juvenile Little Ringed Plovers on the Greenaways scrape on Sunday morning and several Green Sands and a Greenshank mobile around the reserve. The immature Marsh Harrier was seen several times but certainly seems to avoid the main part of the reserve. A family group of Kestrels seem ever present over Big Otmoor and Greenaways often perching on fence posts and gates. They have presented some excellent photo-opportunities.  One of the Bearded Tits was heard and seen briefly on Sunday morning in the scrubby reeds by the hide it subsequently moved off along the hedge beside the bridleway probably favouring the reed fringe of the Closes. There is a very odd bird out in the reedbed. When we first came upon it we thought Beardy then Budgie! Careful observation when it appeared at the top of a reed stem showed it to be a leuchistic Reed Bunting. It is white and orange with clear Reed Bunting markings underneath a very unusual individual.  There are at least three different Little Grebe families to be seen from the first screen and they seem to spend quite a lot of time in disputes with each other. It was very noticeable this weekend how many Water Rails are calling from the reedbed and the reedy margins, which suggests they have had a good breeding year and have replaced the losses they sustained in recent very cold winters.
Butterflies and Dragonflies continue to be seen in very good numbers and on Sunday we saw at least seven Brown Hairstreaks with two along the trail to the second screen and the others along the Roman Road. It is currently possible to find anything up to fifteen butterfly species on any visit to the moor.
Over the next few weeks we will be hoping to find the first returning passerines: Wheatears, Whinchats, Redstarts and Stonechats are all possible but only the Stonechats will stay throughout the winter.
Posted by bark at 14:01 No comments: 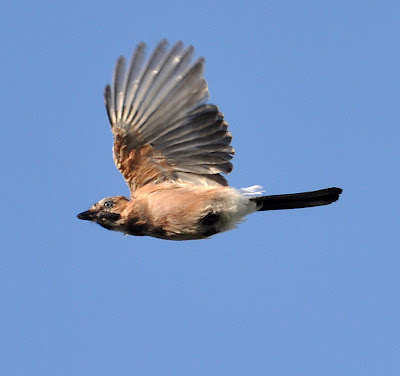 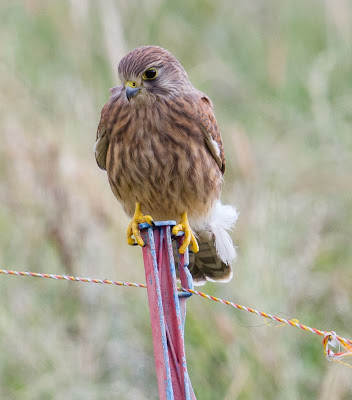 A quiet weekend, typical of the midsummer doldrums but not without interest if you were prepared to take the time to look carefully.
On Sunday morning along the bridleway by standing and watching in just one place for a quarter of an hour or so we saw at least twelve different bird species moving about a clearing in a loose feeding party. They included several brightly coloured juvenile Willow Warblers, Chiffchaffs, both kinds of Whitethroat, Reed and Sedge Warblers and many yellowish, recently fledged, Blue and Great Tits. Long-tailed Tits zipped about the bushes and hung upside down from the umbrella heads of cow parsley, as they gleaned tiny insects from them. Meanwhile a Tree Creeper worked the bark of the blackthorns and in a patch of groundsel in the clearing, both Bullfinches and Goldfinches could be seen munching on the seed heads. In addition to this feeding party we also saw juvenile Great Spotted and Green Woodpeckers and a noisy family group of Jays flew along the oaks beside the path.
A couple of Green Sandpipers fed along the margins of the scrape in front of the hide and on Saturday morning a Greenshank was seen in the same place. Several Snipe were seen flying over Greenaways and then dropping to disappear into the rank vegetation. The Turtle Doves are still present and are still purring, but much more intermittently than in the preceding weeks and I have a feeling that they may soon move on. Last year they seemed to leave at about the same time as the Swifts.
The Lizard City continues to add interest at the first screen and visitors are enjoying the opportunity to see what is usually an uncommon and reclusive species. Dragonflies are at their most abundant with the largest numbers being Common and Ruddy Darters. Emerald Damselflies could be found in the long grass but are fiendishly difficult to spot when they keep still. Careful study of bramble patches showed what vital food sources these plants are to all manner of insects. On them we found nectaring Purple Hairstreaks in several locations, as well other more common species of butterfly. Small Coppers were also seen and the first of the latest crop of Common Blues were on the wing along the visitor trail towards the second screen.
All of this goes to show that there is no such thing as a dull summer weekend......whatever the weather does