The weekend was unseasonably warm, but still cool compared with the temperatures I had been experiencing the previous week in Fuerteventura. In the fortnight since my last visit to the moor Water levels have continued to rise yet still remain below target heights on all the main fields. 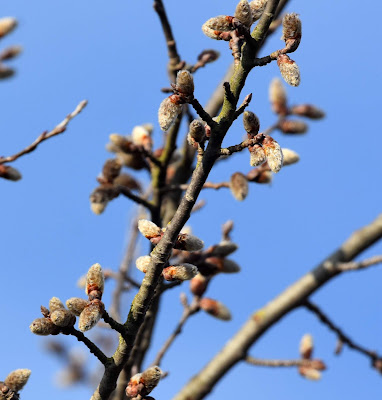 Although twigs and branches are still bare, the sunlight emphasised the first flush of colour in the bushes and trees, that suggests rising sap and the promise of spring not too far away. The resident birds were responding to the spring-like warmth. Reed Buntings, Chaffinches Dunnocks and Great Tits were all actively in song. 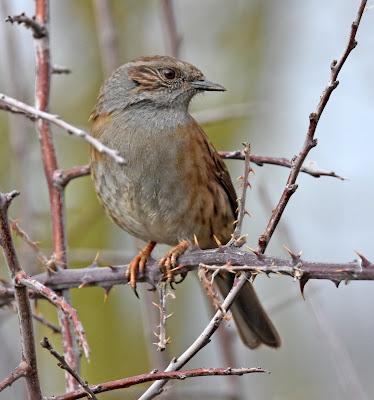 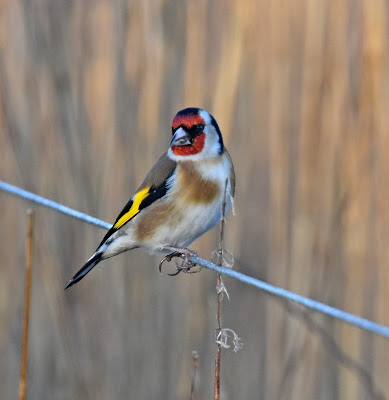 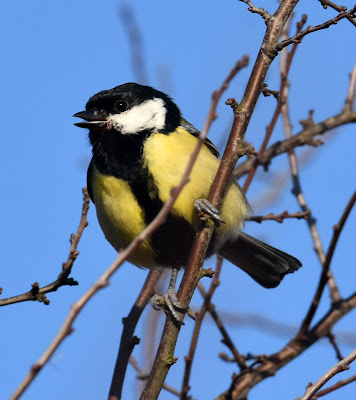 Bitterns were seen regularly at the weekend. On Sunday morning we had a bird fly over us at the “crossroads” area. It appeared to go down beyond the hide into the ditch that goes up towards Julys’ Meadow. From inside the hide we could see it stalking through the shadows amidst the dead and dried up Reed Mace. 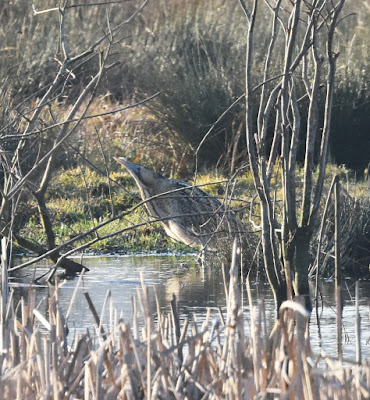 It was actively hunting and we saw it catch and eat prey. The food items looked small not “leggy” enough to be frogs or active enough to be Stickle-backs. We concluded that it was eating newts. There have been a number of reports of Bitterns stalking along the shallow ditches out on Greenaways and it seems likely that this is the favoured seasonal prey.

Out in the reedbed from both the first and the second screens there is a great deal of nesting courtship behaviour from the Grey Herons. Over and around the nest sites they fly in a very un-Grey heron like way, with necks outstretched and using a slow stalling flight. When they land they make a strange series of grunts and barks, quite unlike their normal harsh flight call. 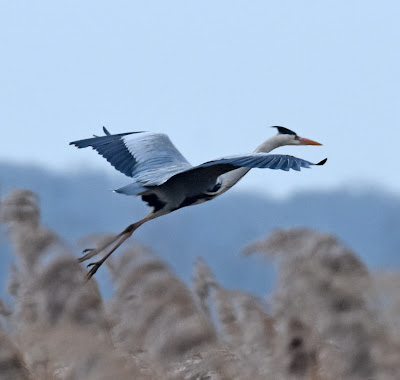 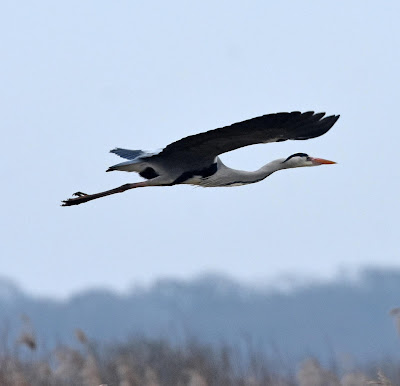 There were further signs of spring this weekend. A Curlew flew over the second screen on Saturday and on Sunday I heard and saw my first Redshank of the spring, by Monday morning there were three birds recorded in the webs count.
A pair of Shelduck were seen last week out on Ashgrave and have come and gone since. It was nice to notice that our regular leuchistic drake Pochard has turned up again for the fourth consecutive year. He is more a blonde than a redhead and is very distinctive. 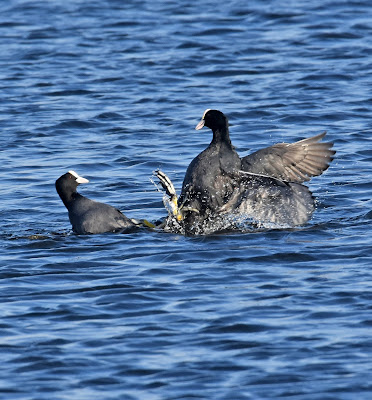 Coot wars have broken out again on the southern lagoon. There were thirty or so birds out in front of the first screen. They really are very aggressive with each other and if two birds started to fight, just as in a pub brawl, other birds would come pattering over the surface to join in. 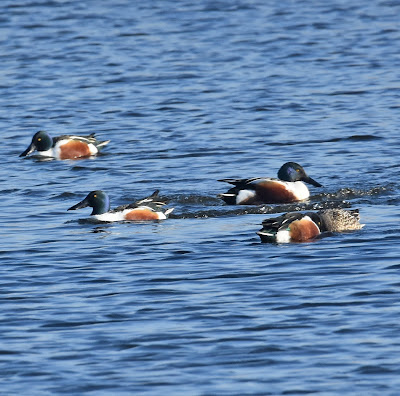 Groups of male Shovellers were pursuing unattached females both in the water and in the air. There has been an increase in the number of Tufted Ducks on and around the lagoons. In the sunlight, if the angle is right, their supposedly black heads show beautiful iridescent shades of purple and violet.

We are reaching that time in the year when we anticipate all sorts of exciting arrivals and changes. Like all of these things we tend to get ahead of ourselves and our expectations are unrealistic. Last year the winter came back in March and savaged us and wildlife with the beast from the east. Our optimism for spring should always be tempered with pragmatism.

Several days of low temperatures and some snow brought a real taste of winter to the moor. Both Saturday and Sunday were the finest kind of winter days clear, sunny and brilliantly lit, the only downside a bitter nagging wind.
Surprisingly, despite the low temperatures overnight, the main lagoons had not frozen completely, and the wildfowl were either paddling around in the open water or sitting rather disconsolately on the ice.

It was reassuring to see that those birds more vulnerable to severe cold had made it through the cold snap unscathed. On Sunday morning after a hard frost we heard at least three different Cetti’s Warblers calling from the reedbed and the bridleway.
The very confiding Stonechats at the second screen continued to entertain and enchant. On Saturday they had been joined by a Pied Wagtail that was flicking along the edge and just over the surface of the water and picking up diving beetles, as far as we can determine from the pictures. 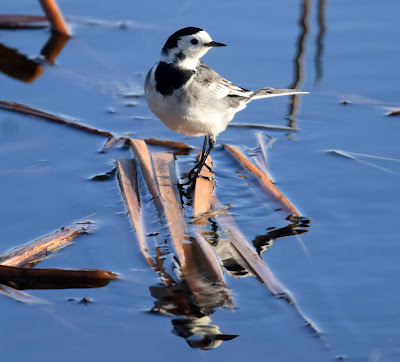 Some observers had noticed that several times one or other of the Stonechats had stolen the insect prey from the Wagtail. On Sunday morning they were hassled by a Robin that chased them from perch to perch, clearly regarding them as competitors for limited food.

We saw no Golden Plovers at the weekend but there were several smaller flocks of Lapwings both on and off the reserve. As we arrived on Saturday morning a larger flock was flushed by what looked to be a male Peregrine but not the one we have been seeing fairly regularly, as it had a full complement of feathers on its left wing. 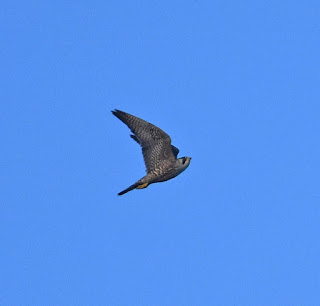 With a return to warmer weather this week we fully expect Golden Plover and Lapwing numbers to rise again as they feed on the wet fields. We should see the first Curlew of the new year in the next week or so.

A drake Goosander was reported last Wednesday from the first screen, sadly it did not linger, probably because of the dearth of fish in the southern lagoon. Eleven Pintail were on the same lagoon on Saturday and flew over our heads at the screen they looked stunning against the clean blue of the sky in the crisp sunshine.


The finch flock is still growing, although more slowly, but does feature a few more Yellowhammers now. It is interesting to notice just how familiar the birds have become with the feeding process. Where they would normally flush right off, they now come in and land just as we have gone past with the seed spreader. 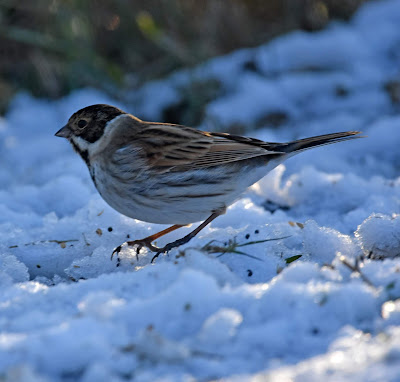 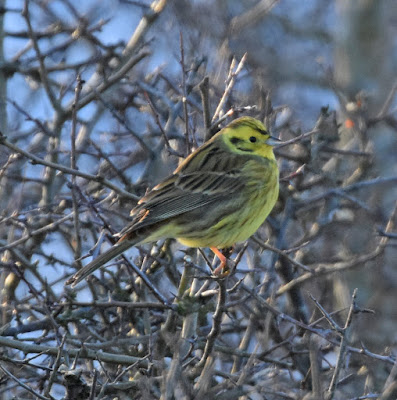 The only thing that does clear them out is the presence of the Sparrowhawk, and after it’s been through it usually takes them about fifteen minutes to re-settle and resume feeding. Once again the Water Rail is out in the open on the path and can be seen picking up fine seeds in its long bill, which must be a bit like trying to eat peas with chopsticks.

On Ashgrave our small herd of Fallow Deer has now swollen to nine including a particularly well antlered stag.