The weather forecasters actually got it wrong this weekend and unusually this time their error was in our favour. Instead of the predicted grey wind and rain Saturday morning produced patches of blue sky and odd bursts of sunshine. Sunday however, whilst remaining dry, was very windy and dull.
On both days the huge numbers of Lapwings and Golden Plovers present were again the most obvious attraction but with some notable other players. At times the flushing birds showed right around the horizon, as one or another raptor passed over spooking the flocks into whirling clouds. A visitor commented that at times these birds were giving a Starling like murmuration display. What was driving it however was not a pre roost display but simply evasion tactics. Again it is difficult to estimate numbers but there appeared to be no fewer than we had seen last week.
The raptors pushing these flocks around were much easier to see and to count! Two Peregrines are frequently being seen and they may or may not be a pair. The smaller, assumed male is more juvenile featured than the clearly larger mature female. We had excellent views of this particular bird sitting out on a post on the edge of Ashgrave on Saturday morning. Two Sparrowhawks and up to three Kestrels are spread over the whole site. Red Kites too cause flocks to flush but in their case some of the Lapwings are now starting to mob them rather than evading them. There looks to be a territorial dispute starting over an abandoned crow’s nest in the large oak to the east of the reed bed. Both Red Kites and Common Buzzards are looking to take over this attractive property. The two resident Marsh Harriers are almost always visible over the reed beds flying low and purposefully hunting opportunistically. They frequently flush surprisingly large numbers of Teal out from amongst the cover of the reeds.
In the sunshine on Saturday the wildfowl were looking particularly smart. Groups of courting drake Shovellers would take to the air in close pursuit of unpaired females. The drakes are in their optimal breeding plumage now. 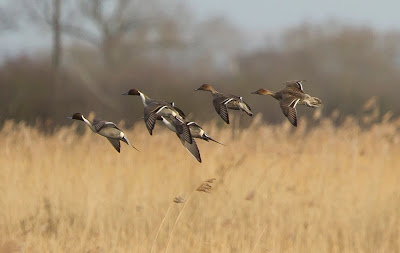 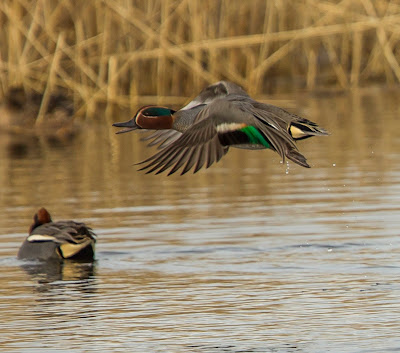 Several parties of Pintail were seen and on Sunday when a major flush of wildfowl occurred from the direction of the flood field one group of over fifty flew off over to Big Otmoor. They were accompanied by at least two hundred   and fifty Wigeon a fantastic sight as they passed low and close over the first screen. The most spectacular thing however was on Saturday, when perhaps a couple of hundred Golden Plover flushed from Big Otmoor and flew fast and no more than six metres above our heads at the screen. The noise from their wings was dramatic and even the downdraft was perceptible. One of the group remarked “that was the sound of Golden Plover’s fear”.

It is always gratifying when one’s predictions work out and last week I suggested that Curlew would be along soon. Sure enough one was heard and seen briefly on Friday and by Sunday there were three. It’s very good to have them back along with their evocative calls.
All of the usual finches were still taking advantage of the food near the hide. The two Bramblings were seen intermittently over the weekend and the number of Yellowhammers continues to go up. Most notably this weekend there were a flock of nineteen Stock Doves feeding on the path on Sunday morning. Surely the most underrated doves and the most beautifully marked. 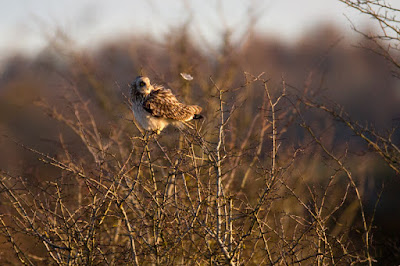 In the evenings after the now somewhat diminished Starling roost, Woodcock are being seen moving out from Morley’s to feed on Greenaways and Closes. Short Eared Owls are also being seen late afternoon but are not conforming to any predictable pattern. The Starling roost itself whilst much smaller can still provide some spectacular viewing but the duration of the display and the number of birds are both diminished. I went down midweek and found that the display was much more distant and only lasted for ten or twelve minutes, having said that the shapes and swirls created were as always stunning but distant.
One footnote to the weekends birds was an intriguing paler and greyer Golden Plover seen on Sunday. The bird clearly stood out as being differently coloured to the others around it. It was not possible to establish its structural features as the birds were hunkered down in the strong winds and were not moving about or feeding, when the flock flushed it was not relocated. The chances are that it is still out there somewhere on the moor and any additional pictures of it would be greatly appreciated. At present it is regarded as being an oddly coloured “normal” Golden Plover, but it would be great to confirm it as something different.
Posted by bark at 09:19 No comments:

The folk origins of Valentine’s Day arose through the belief that it was on this day in February that wildlife, especially the birds, chose their mates for the year. Although we know that this is just an old wives’ tale there was much more evidence that courtship and display was getting going. The cold grey sleet and strong winds of Saturday gave way to sunshine and a chilly start on Sunday and it was on Sunday, St Valentine’s Day itself, that this “choosing” was most evident.
As I arrived a Song Thrush was singing lustily from the blackthorn in the carpark field and where I heard just one Chaffinch singing last weekend, on this Sunday I heard at least ten, spread out across the reserve. Skylarks were performing aerial displays above Greenaways and chasing each other across the sky. Great Tits and Dunnocks were also starting to sing more noticeably. Over the reedbed the resident pair of Marsh Harriers were reinforcing their pair bond flying together and simulating a food pass almost locking talons.
The skies were again dominated by huge numbers of Lapwings and Golden Plovers. My impression was of more Goldies than Lapwings but the birds were so spread out and flushed so often that it is very difficult to estimate accurate numbers. As the morning drew on they gradually became less nervous and flighty and flushed less frequently. They have been feeding on the Noke sides Fields and while there it is possible to go through them carefully and look for an American cousin. Sadly, none was found on Sunday but with such large numbers of birds it is quite possible that there might be an odd one, after all it happened twice on Port Meadow!
Another sign of the advancing season was the first returning Redshank found on Thursday morning, as we move towards March so their numbers will increase and we can also expect the first Curlew to arrive any time soon. 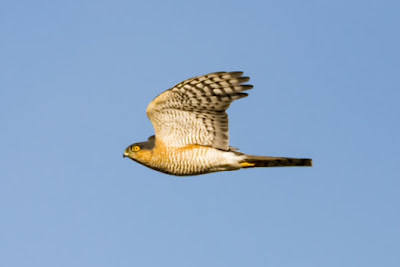 Although much reduced from its earlier numbers the Starling roost is still impressive and one of the reasons why we still attract lots of raptors to the reserve. It is easy to find the “walking wounded” feeding on the grassy edges and adjacent hedgerows during the day time. Unable to fly properly they scuttle off into the longer grasses and bushes as you come across them. It is inevitable that there will be casualties and ailing individuals and they offer an easy meal to both avian and mammalian predators alike.
As I have reported before, the winter seed feeding beside and to the south of the hide is proving again to be a great success. It provides food at a critical time for birds that rely on small seeds and weedy field margins, which are a fast disappearing resource. There is a “hungry gap” for seed eaters that extends into spring before the first weeds set seed and also those winter months when finding food is more difficult. We are now attracting over two hundred Linnets, well over a hundred and fifty Reed Buntings, Chaffinches, Goldfinches and this week twelve Yellowhammers, a bird that has been much scarcer on Otmoor since there has been a decline in arable farming in the area. It has also attracted Mallards, Wood Pigeons, Moorhens, five Stock Doves, assorted Rooks and Jackdaws and of course a pair of Sparrowhawks. So much available food will as everywhere else inevitably attract raptors. The male Sparrowhawk will often pause for a while right next to the hide on the fence, as it did on Saturday, offering superb views. 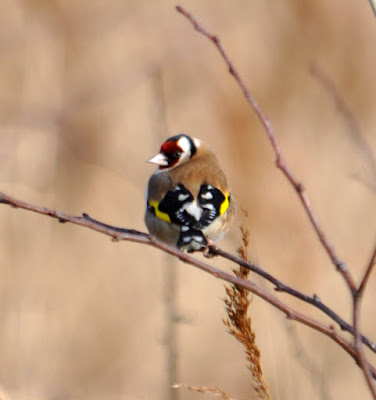 Out on Greenaways there are at least two pairs of Stonechats and another pair were found over on the Oddington side on Sunday. Bitterns are being seen regularly but as yet not a single boom has been heard. Over the next week we will be listening out for it and also for the first returning curlews.