Saturday carried the promise of spring but by Sunday we had reverted to this winters default mode of strong winds, grey skies and occasional rain. It was very noticeable however that the floods are starting to draw down. There was a significant difference between the amount of “dry” land showing, even over the two days of the weekend.
On the Closes the difference is most apparent and the Lapwings are already staking their claims to nesting sites and advertising for mates. Their looping and swooping display flight accompanied by their “peewit” call is one of the delights of early spring on Otmoor.
Other birds are anticipating the coming season, with Chaffinches, Skylarks, Songthrushes and Reed Buntings all singing strongly from prominent song posts.
The regular raptors were all seen over the weekend and the short eared Owls and the Barn Owls are becoming regular features of dusk in the carpark field. The Barn Owls are also hunting over the reedbed and along the bunds. There are still record numbers of both Wildfowl, Lapwings and Golden Plovers. There are now Curlew calling over the reserve and feeding on the northern edge of Greenaways. Redshank are evident both by call and in flight. There are still mobile parties of Dunlin and Ruff feeding on the areas that have recently been flooded and in amongst the commoner birds. On Sunday there were three Black-tailed Godwits feeding and roosting on Greenaways. Both Bittern and Bearded Tits were seen over the weekend but not by me. There were however a pair of Ravens over on Sunday.
There are at least four Little Grebes making their bubbling call from the southern reedbed and they have become the ninetieth species to add to the yearlist.
In the Carpark field there is a strain of blackthorn that always blooms early and this year it is even earlier than usual, there is also an early Hawthorn that is actually coming into leaf. Both of these bushes are very fortuitously positioned for sunshine and shelter. Seeing how far on they are really sharpens my anticipation of the excitement to come as we go through March and into April.
Posted by bark at 01:57 No comments: 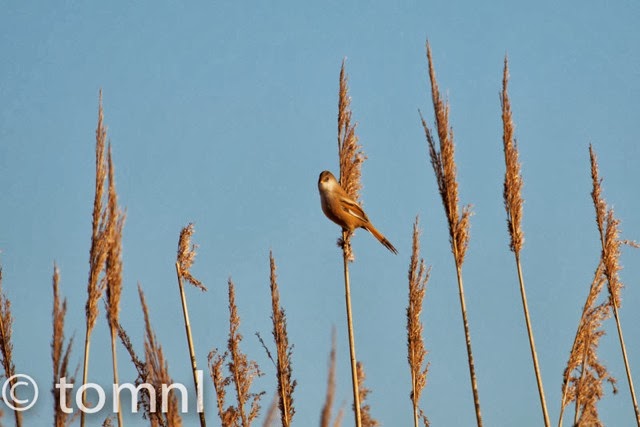 Two largely dry, but very different days, this weekend. Saturday was mostly bright, but with occasional stinging showers driven along by gale force winds. As is typical of such showers, they arrived just as I was between hides or roofed screens. Sunday was classic calm after the storm, with a very light breeze, sunshine and bright blue rain-washed skies.
Once again there were lots of good birds to see and once again in huge numbers. On Saturday when the birds flushed they were strewn across the sky by the force of the wind like autumn leaves in a gale. But once on the ground they were hunkered down faces to the wind. I decided on Saturday that I just wouldn’t estimate the numbers of Lapwing and Golden Plover any more, it was getting really difficult to follow the flocks, but I am sure that there were more birds this week than last. I would be very surprised if the the WEBS count being done today didn’t return record figures.
As I arrived on Sunday morning there were two Song Thrushes singing lustily in the car park field as well as Dunnock, Robin and Wren. The Bullfinches are becoming more and more confiding, as they feed on blackthorn buds and their soft pink colours really glow in the low dawn light. Along the bridleway there were several small parties of Redwings picking through the grass but I only saw one Fieldfare this weekend.
Amongst the throngs of Goldies and Lapwings it was possible to pick out other waders and on Sunday morning there were five Black Tailed Godwits on Greenaways. There was still one Sanderling amongst the lapwings on Big Otmoor and a number of Ruff. The lone Grey Plover is still on Big Otmoor but tending to stay separate from the other birds.
Highlight of the weekend for me was getting some excellent views of one of the two Bearded Tits that were feeding close to the viewing area next to the first screen. Their colouring is beautiful, the subtlest range of orange and gold and it blends perfectly with the fading reeds. The birds were calling frequently and their pinging proceeded us from the edge of the reedbed, as we made our way towards the second screen.
A very large party of Long Tailed Tits can currently be found, working their way along the hedgerows and there must be over twenty birds in the flock. They are very busy and acrobatic as they glean their food from the undergrowth and although close and confiding are very difficult to photograph well.
I seem to be noticing more Meadow Pipits around and there are several pairs of Pied Wagtails picking along the edges of puddles and open water. There is certainly plenty of insect food for them and the three Stonechats between the hide and July’s Meadow appear to be thriving
All the regular raptors were seen, but the Peregrines now appear to have abandoned the oak tree that they had been frequenting, but are still present on and over the reserve. Once again Short Eared Owls and Barn Owl were hunting in the car park field at dusk.
There were no new species to add to the year list this week, although I am sure that I heard Redshank call three times on Sunday, but ten minutes scoping of Greenaways failed to find them. It will not be long though before they are here. On Sunday spring really felt just around the corner.


A very windy weekend with a watery blue sky between heavy showers on Saturday and a very grey Sunday.
Just as over the last few weeks the excitement was generated by the sheer numbers of birds currently on and around the moor. Lapwings and Golden Plover are by far the most numerous but there are other waders in amongst them. There are well over forty Ruff to be found, some out on Big Otmoor and on Sunday others were feeding amongst the Lapwings on Ashgrave. Smaller numbers of Dunlin could be be found with very careful scanning but they showed out best when flushed by passing raptors. Most notable this weekend was a small flock of about twenty Sanderling that moved between Big Otmoor and Greenaways. They were very distinctive, flying very fast and tightly together, their white undersides showing clearly as they banked and turned. There is still a Grey Plover amongst the Golden and it was seen out on Ashgrave on Sunday and on Big Otmoor on Saturday.
Pochard numbers are higher than they have been all winter with well over fifty birds present on the reedbeds. Gadwall are also spending most of their time on the reedbed lagoons and are now beginning to get amorous as the days lengthen. Groups of five or six drakes can often be seen chasing unpaired ducks around over the reedbed and then displaying vigorously when they land back on the water. The males are looking particularly smart in their subtle grey and black plumage. Pintail numbers are also high with many pairs scattered over the whole reserve and a large number out on the Flood Field, only really visible when flushed by one of the larger raptors. Many pairs of Shoveler are now out on the open expanse of water that is Greenaways I assume that they are hoovering up the seeds and other detritus that has been washed out of the grass. Coot wars seem to have broken out all over the place with pairs bickering and threatening each other.
I seem to have said every week that the moor is wetter than I have ever seen it in sixteen years and this weekend was no exception. Some of the visitor trail is now flooded and there is no access to the moor from the Noke end or from Oddington. The view from the top of Otmoor lane is spectacular, the reedbed standing out like a brown island in the sea.
An Otter was seen from the second screen on Sunday and it flushed all the Pochard. I heard a brief ping from a Bearded Tit in the same area but was unable to find the pinger! The two Short eared Owls were joined by a Barn Owl in the carpark field at dusk yesterday and the Tawny Owl has been calling again from the Roman Road.
My prediction of Curlew last week materialised even as I was writing and I was not expecting the Sanderling at all, but our next arrival now should be Redshank, after all they have been down on Port Meadow for weeks.
It really is an exciting time of year.
Posted by bark at 02:35 1 comment: 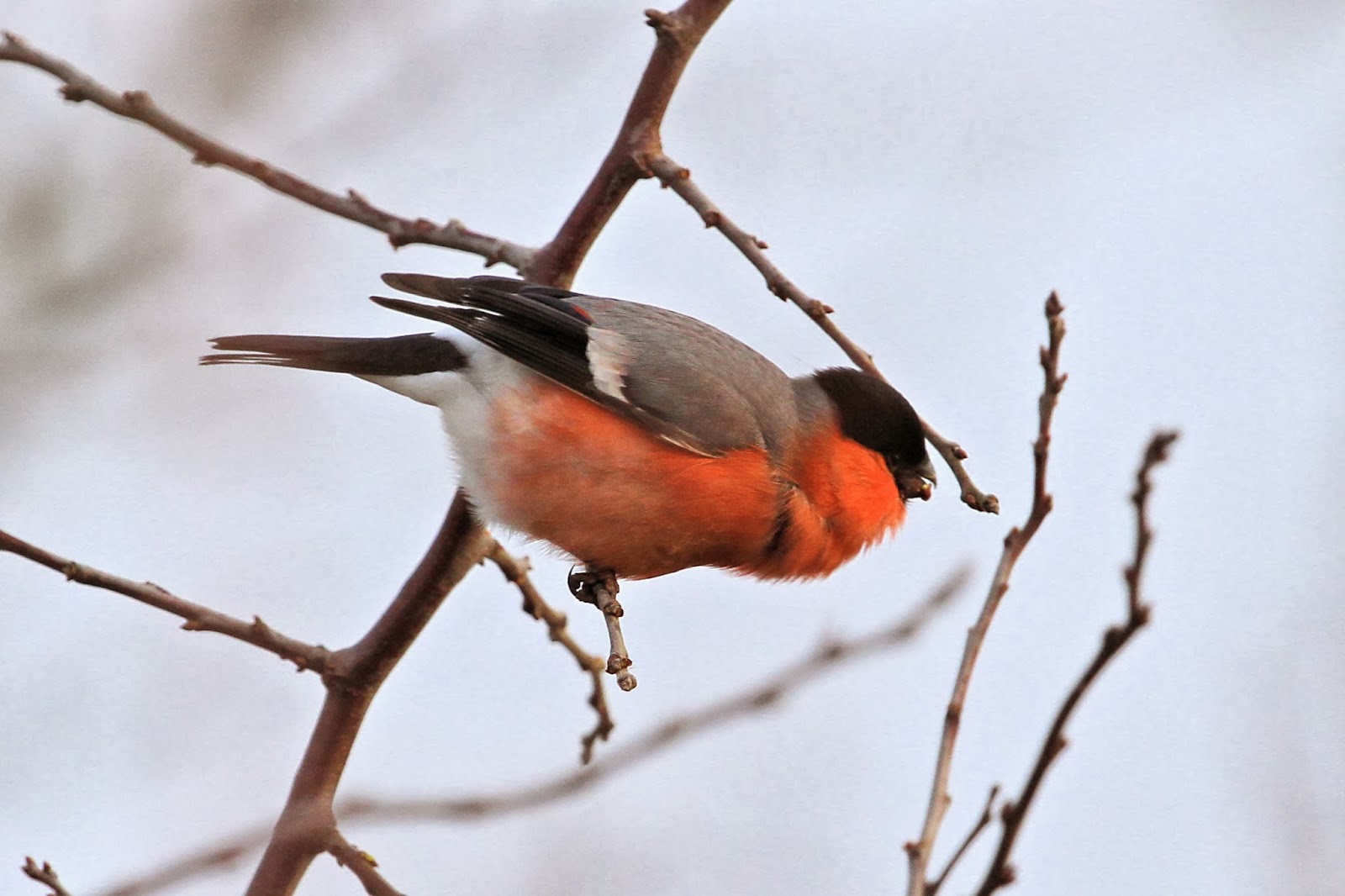 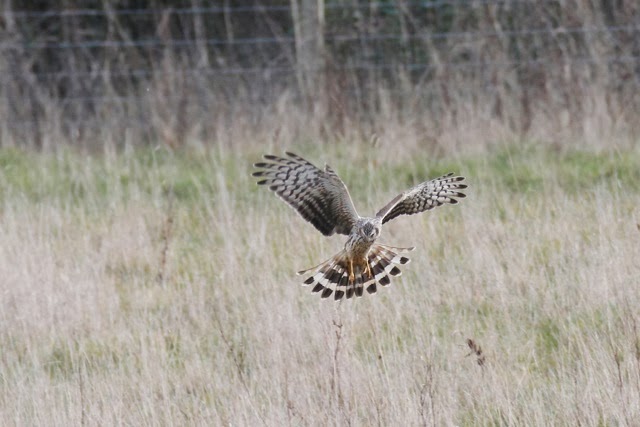 For the first time for a weeks we managed two consecutive days of reasonable weather including some winter sunshine. Dawn on Sunday was another red-gold beauty as the sun came up through the silhouetted oaks in the Roman Road. The floods have not declined to any great degree and there are still vast wheeling flocks of Lapwings, Golden Plovers and wildfowl to be seen over Big Otmoor and more distantly, over the Flood Field.
Once again it was easy to find the Bullfinches in the carpark field and another small party near the hide.  Looking closely at the Blackthorn  it is possible to see how the buds on the tips of the twigs have begun to swell and colour over the last few weeks and thus provide food for the birds at one of the toughest times of the year.
Raptors are giving excellent views and the Peregrines in the oak tree beside the path to the second screen are now looking more like a regular pair. On Sunday when they were perched closer together it was clear that one was much larger than the other suggesting a female. There are also two Hen Harriers being seen one significantly smaller than the other. They are both ring-tails so perhaps the smaller one is a juvenile male. They seem to have regular circuits out and around the moor and their progress can often be followed by the regular flushing of their prey. They can often take a couple of hours between circuits.
There are other waders out on Big Otmoor with the Lapwings and Goldies. On Sunday there were at least forty Ruff, double figures of Dunlin, a couple of Black tailed Godwits and a Grey Plover.
There are still huge numbers of Teal and Wigeon many out on Big Otmoor along with a large number of Pintail. There are now over forty Pochard on the reedbed and more than twenty Gadwall in the same location. Two Skylarks were singing high over the flood Field in the sunshine, surely too early to be territorial but certainly enough to lift the spirits.
I only managed to add one species to the yearlist this weekend when I found a lone Goldcrest flitting its way through the bushes along the bridleway towards the Roman Road.
I suspect that our next addition will be Curlew as they tend to turn up on the moor after the middle of February adding their distinctive, evocative calls to those of the Lapwings and the Golden Plovers. 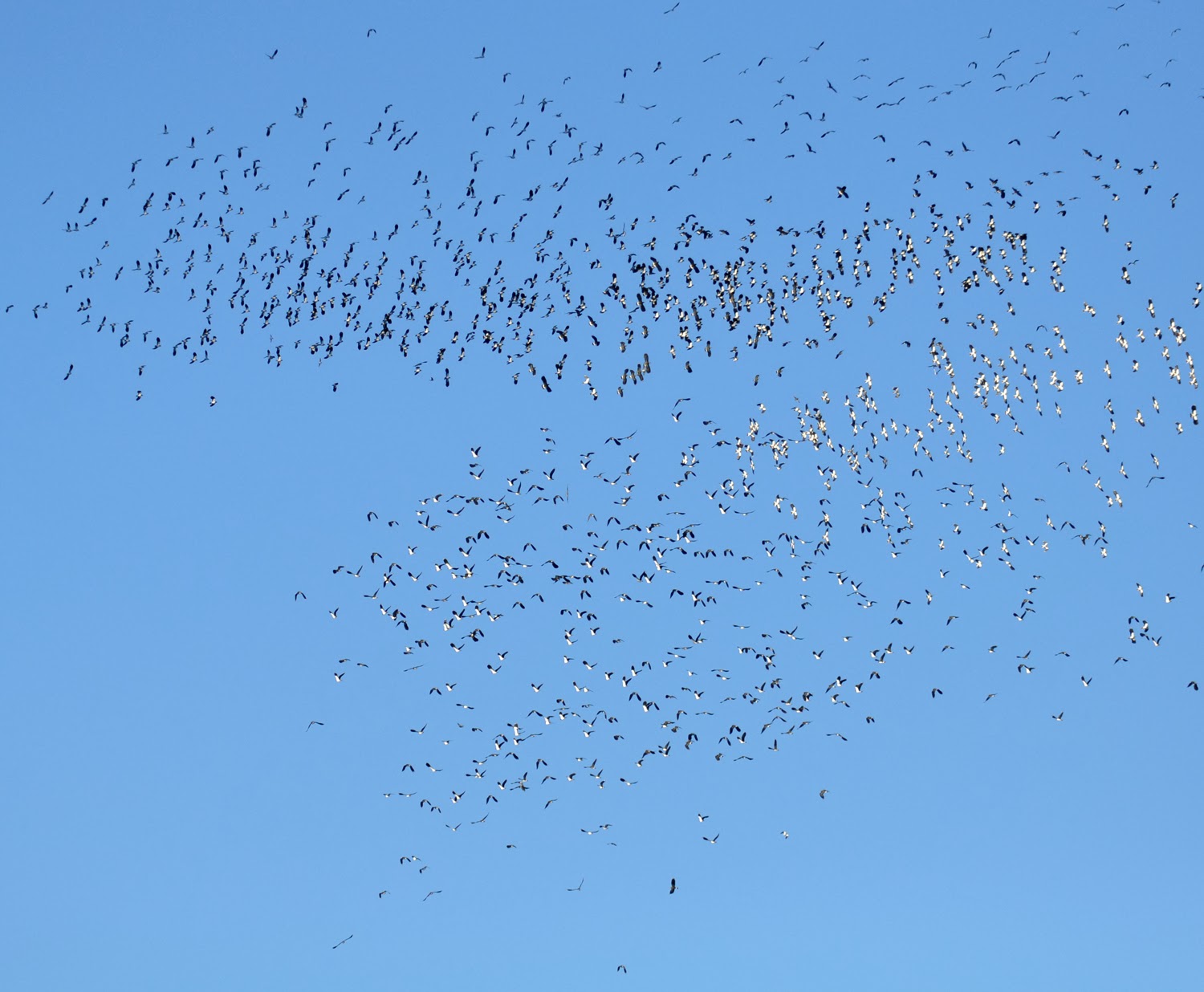