Mid-June The last view, just from from the bridleway?

The heavy rain of last week and overnight at the weekend, has recharged the scrapes and pools across the moor. It has also encouraged another growth spurt in the vegetation and everywhere is lush and verdant. Cow parsley and other umbellifers are frothing in the hedgerows, while Teazels and Burdocks seem to grow inches over night creating their strong structural shapes beside the paths and on any vacant piece of ground. 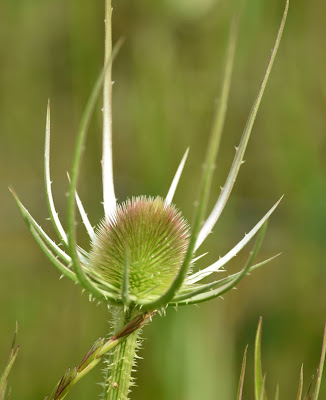 The hedgerows and ditches are busy with birds that are provisioning nestlings, and already there are many family groups of freshly fledged tits and warblers to be seen.
Some are still being fed away from the nest by parents and others are fully independent. Some adult birds are singing once again and starting  second broods. 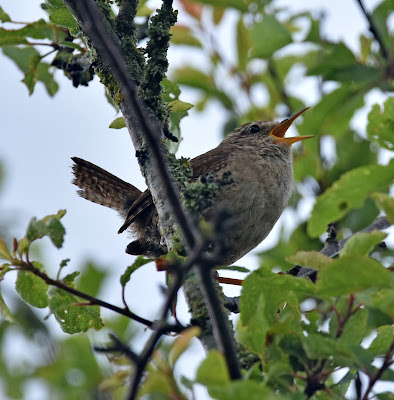 Out on Big Otmoor a pair of Pintail have bred successfully, although now there only seems to be three offspring left in the brood. This is a very significant occurrence as this is the first time that this beautiful species has successfully bred in the county. There has sometimes been  the odd pair that has hung about in the spring and late last summer we did see a couple of eclipse males on the southern lagoon. 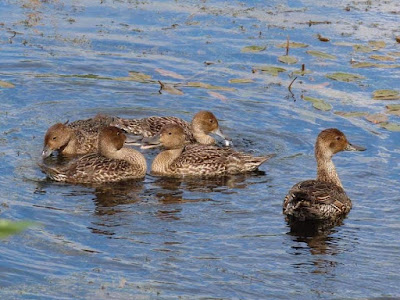 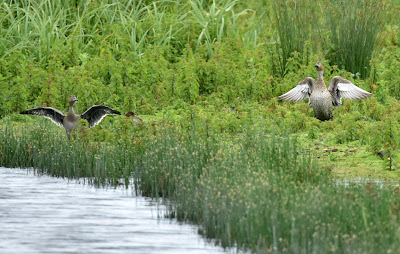 Close to the reserve a female Mandarin has been seen with ducklings further adding to the tally of breeding species on the moor. A very young Stonechat was photographed in the last week to the south of the hide and it seems very likely that they have bred once again either on or adjacent to the reserve. 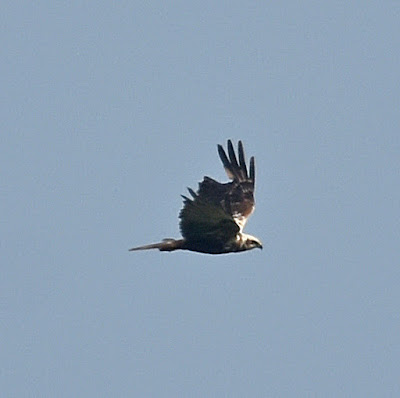 Although we have not been able to access the reedbed for the last several months, we have been able to watch three adult Marsh Harriers coming and going across all of the fields as they hunted to provision their chicks. This weekend we were able to see two of the resulting chicks perching on the top of the reedbed bushes as they waited for the adults to bring in food. Newly fledged Marsh Harriers are distinctive, they are a uniform chocolate brown with yellow cream head markings. There are three easily identifiable adults, a strongly tri-coloured male, a female with particularly pale forewing and shoulders and another female that is missing a primary and several secondaries from her left wing. 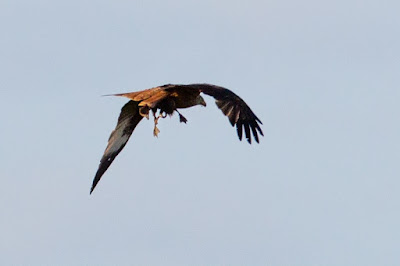 Bitterns can be seen as they move between different feeding areas and on Saturday morning this week three were seen flying out of a small reedbed close to the bridleway.
On the previous weekend I was lucky enough to arrive at the same spot just as a periscope like head was rising above the reeds and taking a long look round. Eventually the bird sprung up using its legs to thrust it above the vegetation and so get its wings into action. 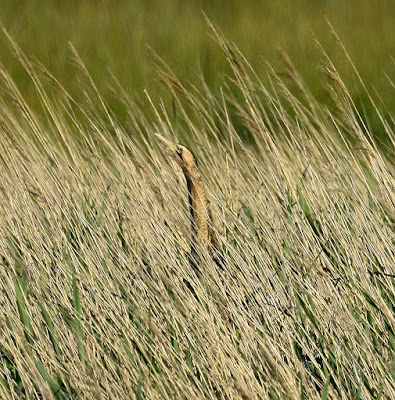 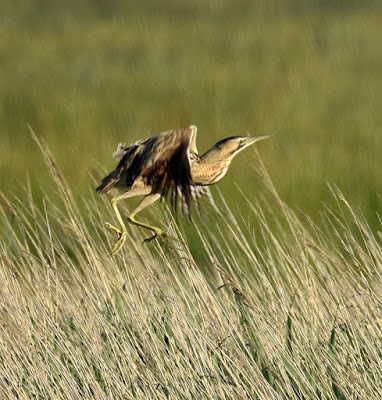 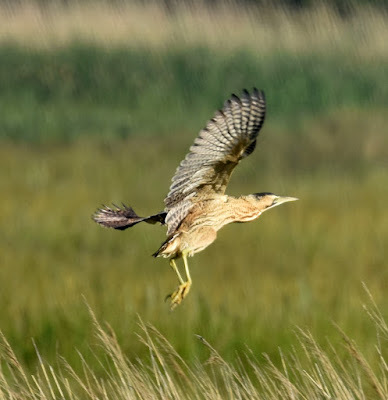 Whilst many species have bred successfully across the reserve, once again “our” Cranes were not able to raise a chick to fledging. We were hopeful that this year would be the one when we could claim the first successful breeding in Oxfordshire of these stunning birds, for something like three or four hundred years.


Our hopes were raised even more when “our” pair were joined by another pair and an unpaired female. I say joined, but pairs are very intolerant of each other when occupying breeding territory. There were disputes and eventually both pairs settled down to breeding. It must be said that both pairs were even more intolerant of the unpaired female, “Bopbop”! ( the cranes from the re-introduction programme were named by primary school children on the Somerset Levels…….need I say more? ) Our regular pair, Wycliff and Maple Glory, settled down to nesting early and we were able to monitor their laying and incubation by watching their behaviour. The new pair, “Ted” and “Excalibird” made their breeding attempt later. We were able to calculate when the chick or chicks had hatched and duly the parent birds were seen with what we assumed was a youngster down in the grass. Later still reserve staff saw a well grown youngster that we calculated was six weeks out of the egg, being carefully attended by its parents. Then unfortunately something untoward happened and we presume the chick was predated. As soon as we see the adult birds flying together, we can assume the worse. The second pair also hatched young, but their offspring would appear to have perished just ten days after hatching. The Crane experts suggest that there is enough habitat in the Otmoor basin to support three or four pairs of Cranes. 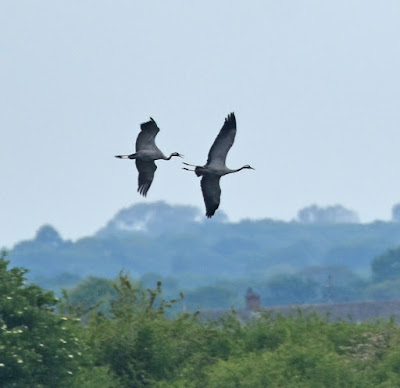 They are long-lived birds and must be learning all the time, so yet again our hopes for a successful outcome are postponed for another year. In the meantime, they can be seen and heard on and over the reserve. The pairs are still quite bellicose and will bugle loudly at each other if they get too close or indeed if one pair invades the others airspace. Interestingly once they are back on their wintering grounds they will coexist in large flocks. We are able to identify them precisely because they carry individual coloured leg rings that can be read from a distance, although as the grass gets longer this can be much harder to do. 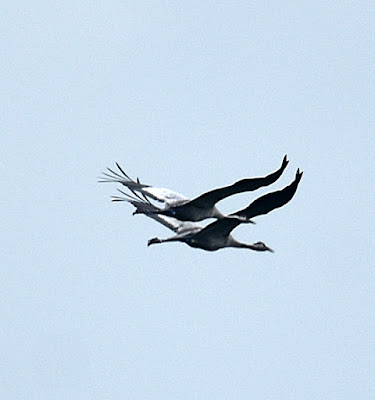 This is the time of year when insect life on Otmoor thrives in all its weird and diverse forms. Butterflies are on the wing in increasing numbers and our rarer species like both Black and White Letter Hairstreaks can be found with careful searching. Brown Hairstreaks will be on the wing later on in the summer. 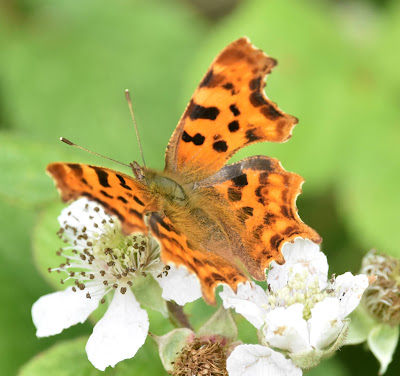 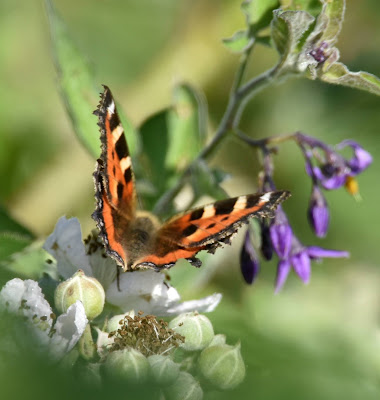 Strange creatures like the rare Hornet Moth are being found. They use Aspens and Poplars as their food plants, and we have good numbers of mature Aspens in our hedgerows. It is an extraordinary piece of mimicry, to use the fearsome hornet with its powerful sting as a way to deter predation.
A small colony of a very rare Dragonfly has been found beside the river Ray close to the reserve. They are Southern Migrant Hawkers a species that is expanding its range northwards and westwards. They are very similar to Southern Hawkers but there are subtle differences apparent to the cognoscenti. This is the first occurrence of this species in Oxfordshire.


The occurrence of regular, new and rare breeding species of both birds and insects reflects just how rich the Otmoor environment is. Once again it has shown that once you create and maintain habitats wildlife will find them and exploit them.