End of April and beginning of May...The view from the bridleway.

I noticed that last Sunday was “National Dawn Chorus Day” a fellow birder remarked that every day is dawn chorus day! Looking at my calendar I notice amongst the dozens of crossed out events, that I was due to take out my annual Dawn Chorus Walk last weekend.
At least I was spared the 4.30 am start but was sad not to be able to do it, as we have been doing for the past ten or so years. There are a number of people who have become regular attenders and I have missed enjoying their company and their enthusiasm this year.


Despite not being down on the moor as early as I might have been for the guided walk, I was there once again to take my exercise this weekend.
The dawn chorus was superb and as prolific as ever. By the time I was out of the carpark field I had heard all the warblers bar Reed and Garden, and within two hundred metres along the bridleway I had heard them as well.
Cuckoos are calling and pairing up and I could hear both males and females. Curlews are calling from the MOD land and Snipe are drumming and “chipping” from The Closes, Greenaway’s and Ashgrave. Bitterns are still booming but not as regularly or quite as loudly as they were just a few weeks ago, it’s as if they are winding down now.


As I walked along the bridleway it seemed that every lone bush was occupied by its own Sedge Warbler, several of them prepared to shout out their wild demented song at point blank range. Reed Warblers are much harder to pick out, as they deliver their more measured rhythmic song from the depths of last years reeds, their progress can be followed by the twitching stems.


By mid-morning Hobbies are taking to the wing over Greenaway’s. At this time of the year there are often more than ten individuals feeding on the earliest dragonflies and the very abundant Hawthorn Flies also known as St Marks Flies, (St Marks Day- 25th April, being about the time they first appear). Yesterday at least twenty Hobbies were seen. They will stay around the moor for a couple of weeks before dispersing more widely across the country to breed.


Big Otmoor is looking very good for passage waders but I was unable to find anything other than the regular Redshanks, Lapwings, Oystercatchers and Snipe. The Wood Sandpiper of a week ago is long gone. There is a loose colony of breeding Black-headed Gulls but much noisier and more obvious still is the mixed flock of juvenile and non-breeding adult Lesser Black-backed and Herring Gulls. Their clamour prompted someone to say that it was just like being at the seaside. It is difficult to know without careful monitoring how much impact their presence will have on breeding Lapwings and Redshanks.
I have twice noticed them eating what look like goose eggs, there are very large numbers of breeding Canada, Grey Lag and various hybrid Geese, that take advantage of the security the anti-predator fence offers.


There have been a pair of Garganey on the central pools and this weekend there was a lone drake, it was very mobile and once or twice flew in and landed on the scrape beside the bridleway. It was lovely to get such close views of what must be one of the smartest ducks in the UK, not as colourful as a Mandarin duck, but somehow classier! 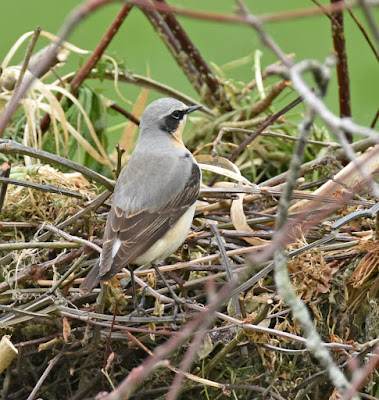 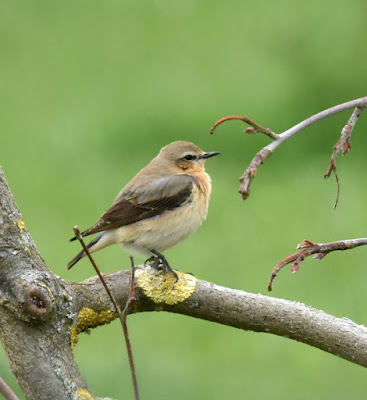 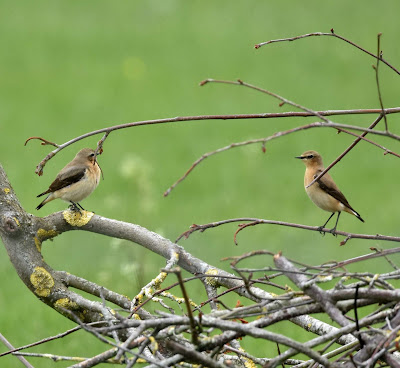 Near the farm at Noke there were five Wheatears, three females and two males perched in a heap of dead bushes, there was also a fine male Whinchat on the fence around Ashgrave.