Spring has truly arrived and perhaps seems just a little bit earlier than usual. Typical of the season however, the weather now looks set to flip back to winter after a run of warm southerly air. There have been new arrivals almost everyday with a smattering of choice scarcities amongst them. 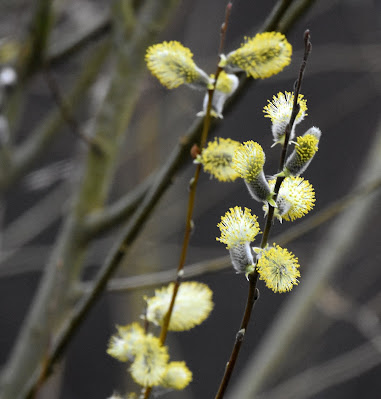 Just two weeks ago singing Chiffchaffs and Cetti’s were the only warblers in town. This year the Cetti’s have been particularly vociferous and very showy.

They have now been joined by Willow Warblers, Sedge Warblers and Blackcaps and the next couple of weeks should see the arrival of  the other common species, with Garden Warbler eventually bringing up the rear.


Wheatears have been seen in the expected places; out on the MOD land, around the farm buildings at Noke and near the cattle pens on Greenaway’s.

As is normal at this time of year Big Otmoor has become the “hotspot” the combination of pools mud and tussocks once again proving very attractive to passage waders, as well as to the normal breeding Redshanks and Lapwings.

There has been a winter plumaged Spotted Redshank, perhaps the one that has been seen several times around Water Eaton. Ringed and Little Ringed Plovers have also been seen and  Black-tailed Godwits in summer plumage have also been noted out there. The Godwits looking very impressive in their brick red summer plumage.
I have heard this morning, as I write, that a pair of Garganey have arrived overnight, they exhibited territorial behaviours last year and may have bred but it was not possible to confirm it.
Five White fronted Geese were on Noke Sides last weekend, but now it seems just two remain. There was a Black-bellied Brent Goose again on Ashgrave, which is probably the same bird as was seen around Farmoor.
The Glossy Ibis that was quite elusive and difficult to find seems to have translocated to the Closes where it is much easier to see. The last Glossy Ibis that spent any length of time on Otmoor in June and July 2014, also favoured this field. The first Avocet to visit Otmoor for a long time was seen swimming
at the second screen yesterday (31st March). We have not had a visit from this emblematic and attractive wader since 2016.
There are a number of Grey Herons Nesting in the reedbed their heads are sometimes visible from the second screen The reeds this year are very flattened. They are much easier to see as they make their feeding flights out and about to the River Ray and across the reserve.
There have been regular sightings of both Great White and Little Egrets around the moor possibly feeding on the amphibians that are currently breeding in the ponds and ditches.
We now think that there are as many as three booming male Bittern across the site. I have had reports that they can be heard in Oddington and a friend in Noke says that booming can be heard at night.
The Otmoor Year-list is now standing at one hundred and twenty-six species, which is fourteen species higher than it was at the same time last year.
We often speculate what might be the next “new” bird for Otmoor or perhaps even Oxfordshire, perhaps another heron species or something completely out of left field. Now is the time to be out there in the field looking, at what is one of the most exciting times of the year.