Another weekend of indifferent weather, showery and windy.
On the bird front there was nothing new to report...until I received a message as I wrote this on Monday morning, of a Spoonbill flying over the reedbed, across Big Otmoor and out onto Ashgrave. The grass there is getting very long and as yet it has not been relocated.
The three Turtle Doves in the area around the pumphouse, cattle pens and along the bridle way have been giving exceptional views. I have met an increasing number of visiting birders who have come specially to see them as they are so scarce elsewhere. I have heard a number of people saying that they feel that this iconic summer dove is destined for UK extinction as a breeding species. Let us hope that they are wrong.
Quail, another iconic summer bird was heard from Greenaways on Sunday, there were clearly two different individuals, as the calling was coming from either side of the stone track. We stood there for about an hour hoping to see one or other of them cross the open ground but to no avail. By the gate there is a small flock of Linnets beginning to assemble. They are taking advantage of the fine seed that we are scattering to help the Turtle Doves. Out in the reedbed the Marsh Harrier is still patrolling from time to time and the Common Terns are sitting out on the raft. Snipe are drumming almost all the time over Greenaways and Big Otmoor and their cryptic plumage and smaller size helps them to avoid aerial predation.
The most interesting and calm part of the reserve is still the Roman Road area, where a fascinating range of bugs and caterpillars could be found in the lush undergrowth. The most bizarre amongst them are the scorpion flies, they look as if they were made by taking a random set of parts from different and unrelated bugs and gluing them together to make a monster. Hopefully next weekend will be calmer and warmer and we can explore some other parts of the moor.
Posted by bark at 14:19 No comments: 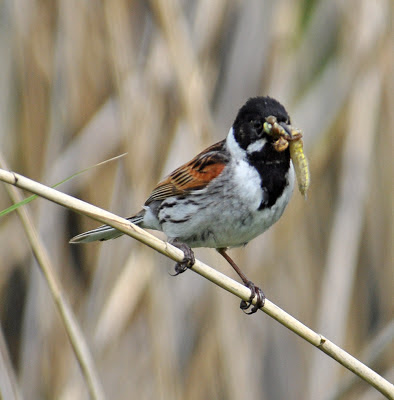 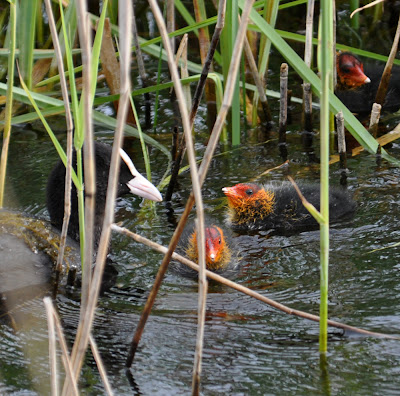 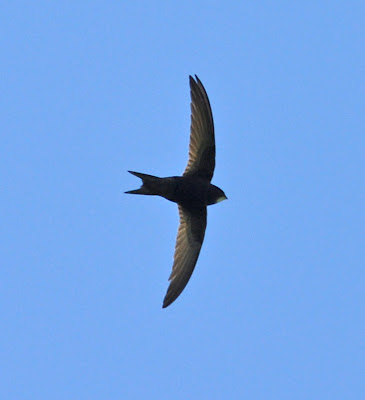 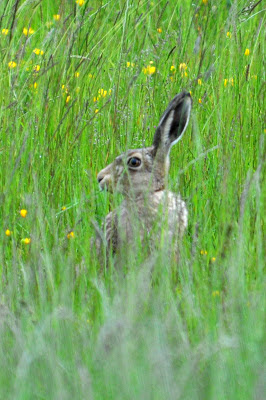 Very windy on Saturday giving way to warmer and calmer weather on Sunday.
My main aim this weekend was to catch up with the juvenile Bearded Tits that had been photographed on Monday. One of them had been seen on Friday and I was quite hopeful. The strong wind meant that most birds on Saturday were keeping their heads down but we did at least hear a couple of pings from the south western corner of the reedbed. Given that we are fairly certain that they bred somewhere on the moor this year it will be worth keeping ears and eyes open in a week or so as they can produce more than one brood in a year. B.W.P. states incubation takes between eleven and twelve days and the chicks fledge between twelve and fourteen days. It is certainly worth paying particular attention when walking along the path between the bridleway and the first screen.
Elsewhere Snipe are drumming over Greenaways and Big Otmoor and RSPB staff have found a number of nests. The two scrapes alongside the bridleway had at least nine Lapwing chicks of several different sizes feeding around the margins and also a family of Redshanks including four chicks. The parent birds always alert to the threat of aerial predation and quick to challenge Kites and Crows. A female Pochard was in the ditch alongside the bridleway with two ducklings in tow and a pair of Mute Swans have four cygnets. The Common Terns on the raft out from the site of the second screen are clearly breeding, on Sunday morning the parents changed over brooding duties and were clearly taking pains to cover their eggs and turn them. The Grey Herons in front of the hide look just about ready to leave the nest as it is getting to be a very tight fit for three.
Grass snakes and Common Lizards were again visible on the pollarded willows in the carpark field beside the track. There were two lizards there together in the sunshine on Sunday.
As we pass the summer solstice we should begin to get some returning waders, neither Common Sand nor Green Sand have been recorded on the moor so far this year, we usually have quite a passage of Green Sands as we move into July and I look forward to seeing them in the next couple of weeks. 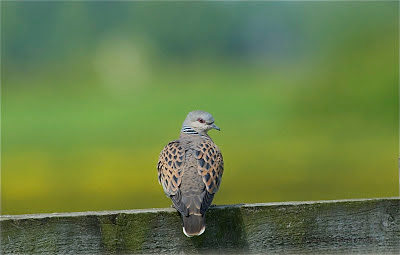 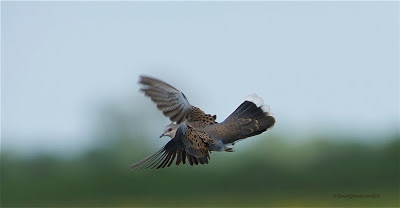 The pictures posted by Peter Coombes on the O.B.L. of two juvenile Bearded Tits taken in conjunction with the adult female found earlier this month, indicates that Bearded Tits have bred   somewhere on Otmoor this spring. This would be the first breeding record in the county. There are disputed records of them breeding along the Thames before 1838. Post breeding dispersal takes place in the autumn and juveniles moult into adult plumage during July. The B.W.P. says that they can produce between two and four broods in a season and so it is not unreasonable to look for more youngsters before the end of July. The size of the main reedbed and the supplementary ones out on Greenaways and along the main ditches mean that it is quite possible for them to have nested successfully without being noticed.
This is very exciting news and hopefully is the start of the establishment of  a regular breeding colony.Congratulations to the RSPB on creating and managing the right habitat.
Posted by bark at 04:07 No comments:

Low cloud and a keen, chilly breeze meant that the moor felt a lot colder than the thermometer might have suggested. Up until midday most things were keeping well out of sight and out of the wind. Long meadow and the Roman Road areas were the most sheltered and the most productive in terms of dragonflies and other invertebrates. Downy Emeralds are being seen regularly down there again and must surely be counted now as a breeding species. The first Broad bodied chasers of the year were also seen in the same location on Sunday.
It is a very good area to compare and contrast the songs of Garden Warbler and Blackcap. Both species are present and in good voice and when they can be heard in such close proximity it is much easier to differentiate between them. However I know that by next spring I will have to learn the songs all over again!
There are still three singing Turtle Doves that have taken up residence in different parts of the reserve and they could be seen and heard over the sound of the wind both mornings. New for the year was a Quail heard calling from Closes on Sunday morning. It called briefly but long enough to be sure of its i.d. Out at the place where the second screen used to be, the Common Terns seem to be sitting although there was a time yesterday morning when no bird was present. The Herons continue to thrive in the nest in front of the hide. This morning a Great Crested Grebe swam into sight with three stripy passengers on its back. It had clearly nested somewhere in the depths of the reedbed. Looking away from the water at the flooded field on the western side, there were twelve Little Egrets but sadly nothing either taller or with a spatulate bill. An added bonus was a drake Garganey feeding among the flooded sedges.
Marsh Harrier, Hobbies, Sparrowhawk and Kestrel were seen alongside the ubiquitous Red Kites and Buzzards. Careful looking will reveal both Lapwing and Redshank chicks usually accompanied by nervous and protective parents. I am hoping that the longer grass will help hide them from threats from above they certainly need something.
Posted by bark at 02:42 No comments:

Saturday and Sunday 1st and 2nd of June

June on the reserve would have got off to the best possible start with excellent weather and interesting things to see, but for one persons greed and ignorance. Some time between dusk on Saturday and dawn on Sunday some selfish idiot decided to dump a tipper truck load of building rubble in the carpark in two heaps. The largest heap occupied at least two cars worth of space, which gives some idea of the size of it. We have looked carefully through the spoil and found that it had come from a house in Marston that is being worked on. Interestingly the pile also contained some flyers for a rubbish collection service. We will pass this information on to the appropriate authorities. It will of course cost the RSPB both time and money to dispose of this material properly, something that the perpetrator was also paid to do. The RSPB’s money and volunteers time are better spent on conservation than cleaning up after irresponsible parasites. With my rant over I can relate all the positive things that we have seen this weekend.

Last week we had a brief visit from a passage Osprey which appeared to be hunting across the waterbodies on the reserve this was our one hundred and fortieth species for the year. The Bearded Tit found last weekend is still present but is elusive and moving along the reedy margins around Greenaways and out into the reedbed. Hobbies entertained and thrilled many of the visitors this weekend with eleven being present on Saturday midday and similar numbers on Sunday. Turtle Doves were also very popular with birders but really only showed first thing in the mornings around the pumphouse and the pollarded oaks along the bridleway. Cuckoos too were present but we have yet to hear a female calling with the distinctive “bubbling” call. There were two Marsh Harriers over the reedbed and Greenaways on Sunday. The large female that has been present for several weeks was joined by another smaller bird which may be a juvenile male. There were four Curlew out on Greenaways and they were mobbing the Harriers as they came over. A drake Garganey was seen on the first lagoon on both days of the weekend and a pair were found on Ashgrave last week. The sunshine encouraged birds to sing and display and many migrant warblers are still collecting nesting material. It also brought out reptiles to bask. In addition to Grass Snakes there were at least two different Common Lizards on pollarded willow stumps in the car park field beside the track. (thanks to the eagle eyed Pete Roby)

On Saturday a Club-tailed Dragonfly was photographed along the Roman Road, as far as I am aware this is the first record of this species on Otmoor. There were numerous Four-spotted Chasers and regular sightings of Hairy Dragonflies. Many other insect species could be found along the Roman Road including beetles, hornets, butterflies and some fearsome looking hairy caterpillars.

With news from Portland Observatory of a massive fall of Spotted Flycatchers on Friday, it will be worth keeping an eye open for this increasingly scarce visitor in the coming week.