Rather a damp, overcast and grey weekend as we head towards midsummers day later this week. There was, as normal, lots to see on the moor although nothing especially unusual or unexpected. The amazing productivity of the site was noticeable, not just the large numbers of juvenile birds being seen but also the burgeoning swathes of wildflowers and when the sun finally did come out, the rich and varied invertebrate life. 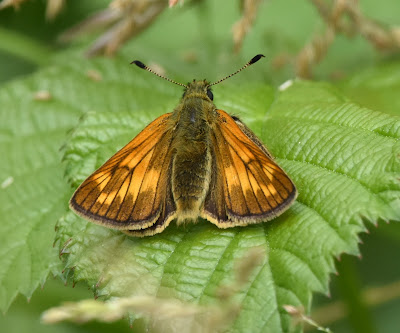 I was wrong about last week being the final hurrah for the cuckoos. There were still three birds present on Saturday and Sunday. They were not so vociferous as last weekend but there were still two males pursuing a female out over Greenaways. The BTO reported last week that their radio tagged birds had already made it down into southern Europe. Perhaps late nesting by our Reed Warblers has delayed the departure of our birds. The hepatic female was one of the three and we hope that she returns next year. 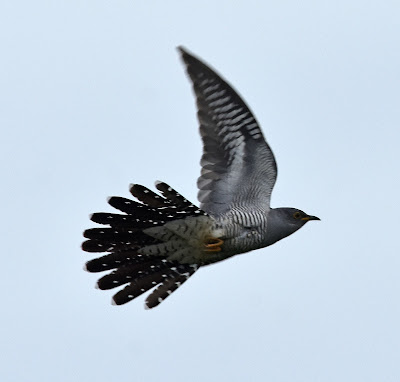 At the second screen we counted nearly thirty juvenile Shovellers all at different stages of development from small ducklings up to just shy of adult size. There was one creche of sixteen well grown youngsters with three adults in attendance.
There was a brood of Pochard ducklings and several small families of Tufted Ducks very much at the downy duckling stage but still able to dive down and bob back up like corks. At the first screen a pair of Mute Swans appeared from one of the channels with four cygnets. The cob then proceeded to harass and bully fifteen Canada Geese until they took flight and headed back to Big Otmoor. Only then did he feel able to lead his family out onto the water and to the shallows just in front of the screen.
It seems likely that Little Grebes are breeding in the southern lagoon they are making a lot of noise but we are yet to see any stripy young, one adult appeared briefly in the open calling all the time before disappearing back into the reeds.

The highlight at the first screen this weekend was the presence of three Garganey on Saturday. A still smart male with a female and another very tatty individual that looked as though it was going into eclipse. The scruffy bird was still present on Sunday but there was no sign of the other pair. 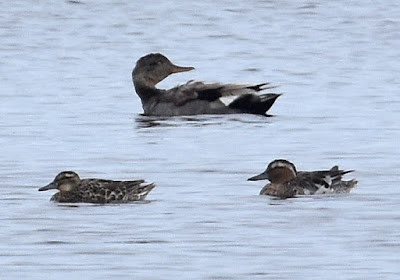 We are confident that we are watching two different Marsh Harrier pairs. Two different males, one in less obvious adult male plumage, are bringing food to two different females that come up for the food passes from two very different locations. One of the males appears to spend more time hunting out over Greenaways, the Flood and the MOD fields. The other favours Big Otmoor and Ashgrave it may just be preference or perhaps avoiding competition. There are frequent food passes, a testament to hunting skills and the productivity of the site.


Whenever the sun was out this weekend it was possible to spot Common Lizards beside the first screen. Two that I saw were quite large and looked to have swollen bellies, suggesting that they were females and shortly about to give birth.
The eggs develop inside the female and they give birth to fully formed tiny lizards. On Sunday morning one had to walk very carefully along the path by the hide as there were tiny toadlets hopping about everywhere taking advantage of the wet conditions after the rain.

Once we get past the longest day then we will start to look for the first returning waders that always appear then. They are probably failed breeders, but their appearance marks another key point in the calendar. 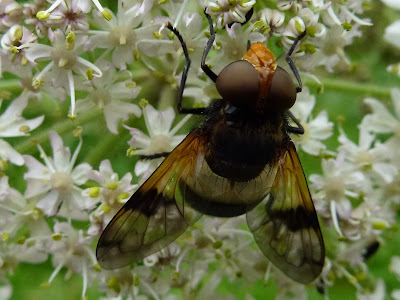 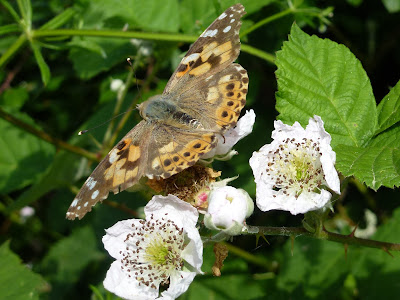 Both days this weekend started grey and cool but by midday the cloud had burned back to sunshine and blue skies. When the sun finally came out the moor looked even more lush and verdant than it had last weekend. The Cow Parsleys, Pignuts and Hogweeds along the bridleway and paths are producing their multi branched bracts of flowers. 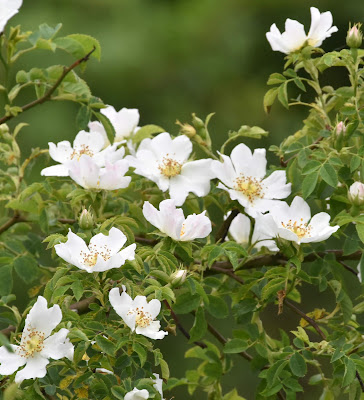 Pink and white roses spangle the hedgerows and out across Greenaways there are drifts of creamy white Meadow-rue rising above the grasses and sedges. The latter flowering prior to setting seed… hay-fever sufferers such as myself, can vouch for just how much pollen they are producing!


There was a good deal of Bittern activity this weekend and it looks very much as if feeding flights are getting under way, but we have not yet established firm details about how many females we are seeing and where they are heading to. I can remember when seeing a Bittern on Otmoor was a red-letter day and now it’s become something that we take almost for granted. It was brilliant to hear and see the reaction of a visiting birder on Sunday who despite having seen most members of the heron family had never seen a Bittern before. Then, just like waiting for a bus, two came along almost at once! It reminded me just how far the reserve has come and how we used to think that breeding bitterns were just a pipe-dream.


Out on the northern lagoon the Tern Raft is once again proving to be productive and on Sunday morning we could see at least five fluffy chicks huddled together and then calling and begging when any adult with food appeared. Seven other adults looked to be still sitting on eggs, so the population is almost certain to grow further.


This weekend may well prove to be the last hurrah for the Cuckoos courtship and mating activities. The males will soon be off, and the females will not be far behind them leaving the next generation secreted in the nests of the Reed Warblers. Once again there was a good deal of activity with males chasing females including the hepatic bird and a lot of cuckooing and bubbling calls. On Sunday a regular observer had six birds flying in front of him and another calling from behind him. We will now watch for females sitting up high in bushes and on fence posts searching for Reed Warbler nests and waiting for the perfect moment to slip in and deposit their egg.
In another three or four weeks we will see how successful they have been, when we find harassed looking warblers feeding their enormous foundlings.

Marsh Harriers too have been very active over the whole moor and from time to time a male will arrive with prey and transfer it to one of the females in an adroit aerial food-pass.
We have reached the time when some birds are starting off their second broods and so the pattern of singing and calling males has changed again. The Lesser Whitethroats that were so loud and noticeable last week are quiet and the Grasshopper Warblers in the car park field and July’s Meadow have started to reel again. Male Reed buntings are singing and vying with each other for territory. It was very noticeable by the first screen as two males chased and chivvied each other around the bushes and tussocks on the bund.


On Saturday morning an Otmoor regular found a Black Hairstreak butterfly on the track in the car park field. It was a cold start to the day and it seemed semi-comatose, she was able to get it on her finger and put it onto a blackthorn where it could start to warm up and get going. They are a very beautiful little butterfly and they will be on the wing for the next few weeks before the Brown Hairstreaks begin to appear in mid-July. 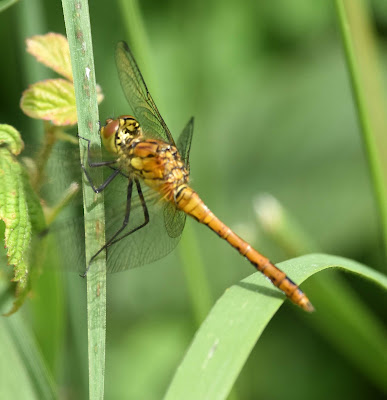 More Dragonfly species are emerging in adult form and we noticed several Darters and Skimmers on Sunday.

The year-list has stuck again at one hundred and thirty-nine species. Perhaps we van hope to hear quail calling in the next few weeks they have already been heard in other parts of the county and are almost annual on the moor. There will be little chance of seeing them as the grass is now so very long. 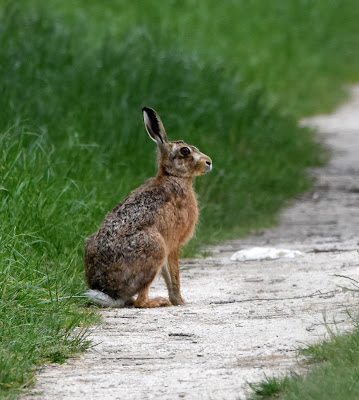 Saturday was damp and cloudy in the morning but picked up in the afternoon, Sunday was beautiful from the word go. The warmth and the humidity accentuated the lush greenness of the moor, as grasses and herbage rush to flower and set seed. 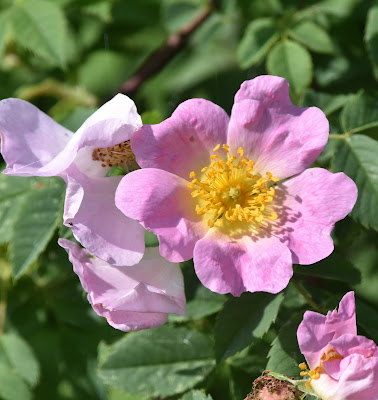 The major excitement this weekend was provided not by a rare or unusual sighting, but by what we ended up referring to as our own particular “Springwatch” moment. On Sunday morning we were gripped by the dramatic fledging and first flights of six Blue Tit chicks. They flew from the nest box attached to the pumphouse at the start of the bridleway.
It was rendered even more dramatic by the threatening presence of a fairly large and probably hungry Grass Snake. The snake was draped along the top of the door to the hut and was no more than inches from the box. I have in the past seen Grass Snakes both in and on top of this nest box and so the threat was a real one. The young birds kept partially emerging and then retreating all the while the parent birds were coming and going with food for the fledglings and feeding them in the entrance hole.
They appeared to us to be trying to coax them out. The snake started to move up towards the box and was at once harried and mobbed by the parent birds. The snake must have leaned out too far and lost its balance altogether and fell away pursued by the chivvying parents. This was the cue for the custard coloured chicks one by one to leave the box and fly up into the surrounding willows.
One after another they struggled to get their shoulders through the hole before making their maiden flights and each time we thought that we had seen the last one until another head appeared in the entrance. We were watching for at least half an hour as this little drama unfolded. There was a Slavonian Grebe at Farmoor that I might have gone to look for, but I have seen them before and I’ve anything quite like this.

Elsewhere there were still at least four Cuckoos chasing round and calling, soon we will be seeing the females waiting on bushes or sitting on fence posts along the bridleway looking for the chance to lay their egg in a temporarily vacant Reed Warbler nest. Half way along the bridleway there is a very loud and vociferous Garden Warbler that sings not from the depth of the bushes but right out in the open.
The Tern raft is very busy now with at least seven pairs of Common Terns in residence and like all tern colonies it can be noisy and there is a lot of bickering and screaming between the individual pairs. 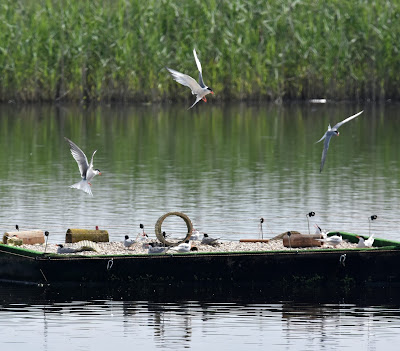 There was a female Shoveller shepherding five “shovellettes” or as was suggested…. trowels! The ducklings do look particularly odd with their oversize bills.

The Bitterns have almost stopped booming now and we heard just a few rather half-hearted calls as we returned from the second screen. A lone Lapwing was feeding close to the Ashgrave hide on the muddy edge that has been poached up by the cattle. Watching it carefully I noticed something I hadn’t seen before. Just as a Little Egret agitates the bottom to stir up food the Lapwing places its’ foot down and trembles it presumably to stimulate worms and other invertebrates to come to the surface. 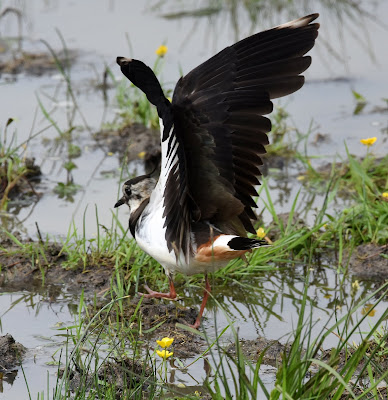 The year list moved on again with the addition on Saturday of the first Spotted Flycatcher of the year and today a Grey Plover over Greenaways. 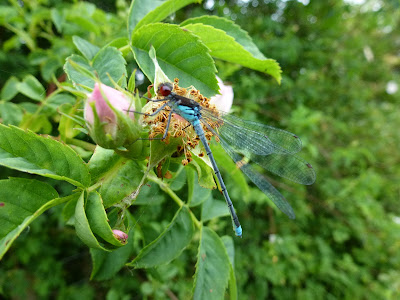 The lush growth has stimulated the insect fauna and we have seen Red eyed Damselflies, many more Four Spotted Chasers plus Cardinal Beetles lurking in the cow Parsley.