Storm Hannah and its aftermath meant that it was a chilly, cloudy and very windy weekend. Birds were reluctant to sit out in the open and sing, which made seeing anything very much extremely difficult, especially on Saturday.


The good news was that the first of the Turtle Doves has returned. It was seen on Friday and was heard purring in the Car Park Field on Sunday. It now remains to be seen if it will be joined by others. It has arrived a week or so earlier than they have in recent years.


We were also able to confirm the last of our nine regular Warbler species this weekend, with at least two Garden Warblers, one calling from the bridleway and the other from beside the track to the second screen. It was also very noticeable that more Common Whitethroats had come in during the previous week and were making their presence heard from bushes and brambles across the reserve. 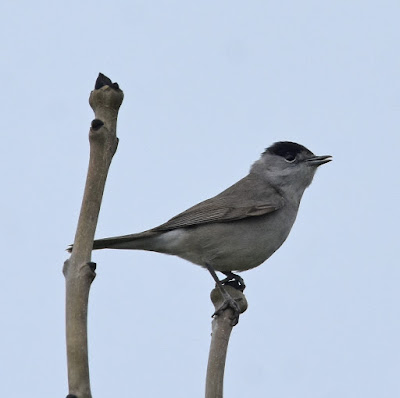 Once again it was very clear that we are hosting more Cetti’s Warblers on Otmoor than ever before, it seems that wherever we walk we are accompanied by Cetti’s shouting from the hedgerows. It is an amazing recovery for them, after being wiped out on the moor during the last very cold winter six years ago. Once again there were two Grasshopper Warblers reeling at different ends of the path to the first screen, but this week in the wind they were calling from deep in cover.

The Swallows that nest in the barns at the Noke sheep farm are back. They are displaying and hunting low over the fields occasionally perching on the wires to preen and rest. I saw my first Otmoor House Martin of the year on Sunday feeding over the northern lagoon, as yet we have not had any Swifts reported.
At Noke it was encouraging to see a Mistle thrush collecting a beak-full of earthworms from one of the sheep fields to carry off to a nest somewhere in the nearby hedgerows. There is also a very healthy population of House Sparrows in and around the farmyard. 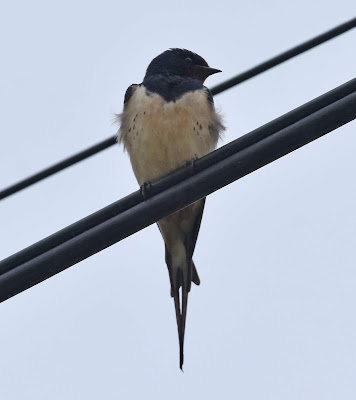 There are still two male Cuckoos calling and roaming over the whole site, we have yet to hear the bubbling call of the females. A female Wheatear was seen out on Big Otmoor on Saturday but there have been fewer passing through than we would normally expect to see, it might be that they moved straight on through, during the spell of fine warm weather earlier in the month. There was a Ringed Plover out on the muddy edges of the Big Otmoor scrapes on Saturday, but no more interesting waders have dropped in.


Two Common Terns were present on Saturday over Big Otmoor and it will not be long before the tern raft is put out again on the northern lagoon. The timing is critical as if it is put out too early it can be occupied by Black-headed Gulls and the terns cannot use it. Last year it hosted seven pairs and they fledged a good number of chicks.


As we move into the start of May the last of our summer visitors will arrive and we will be looking out for a surge in the number of Hobbies feeding over the reserve before dispersing to breed. The first Hairy Dragonflies have emerged over the last week and the dangly legged Hawthorn Flies ( a.k.a.
St Marks Flies ) will also be on the wing, offering a ready source of food for them.
The hare that spends a lot of time on the bund and near the first screen was once again much in evidence and offering abundant photo opportunities. It is surprisingly confiding for what is usually such a wary species. 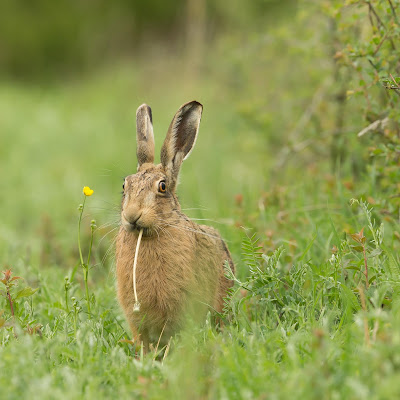 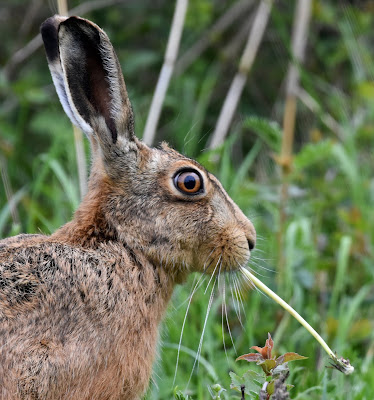 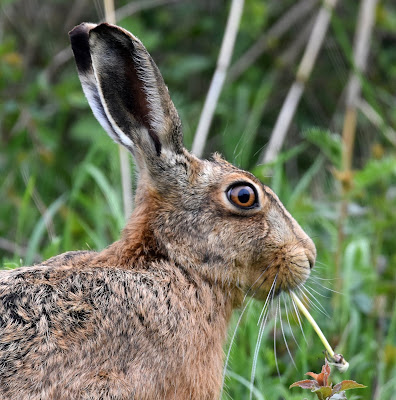 By this weekend, last weeks steady trickle of migrants had become a flood. In the cool of the early morning sunshine the carpark was alive with birdsong on every day of the Easter break. The weather was unusually warm and settled which encouraged both birds to show and sing and visitors to come to the moor. I feel sure that no one coming down could have been disappointed with the birds and other wildlife to be seen. 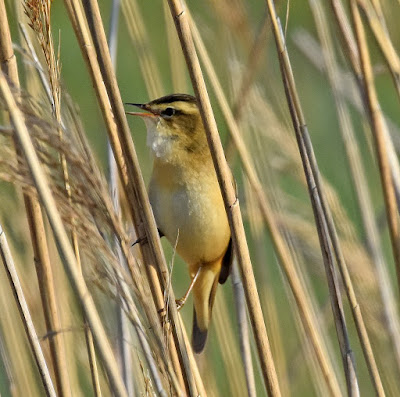 On Saturday morning we heard and saw eight of our regular nine Warbler species, the only one that we failed to find was Garden Warbler, but later on there were several reports of one along the bridleway. 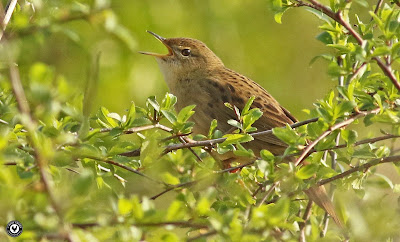 Grasshopper Warblers are often much more visible when they first arrive on the site and true to form there were two individuals reeling beside the path to the first screen, from the top of brambles and in the spindly willows that are still not in full leaf. In addition to these there two here was also at least one bird calling from the usual area in the Car park field. Lesser Whitethroats were more noticeable than Common Whitethroats and it may well be that they are still to arrive in numbers. 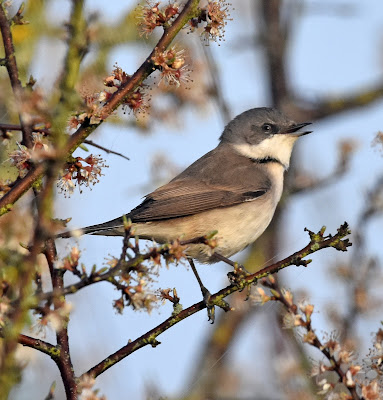 On Friday a Ring Ouzel was found in Long Meadow. They really like the short grass and isolated bushes, and we have found them there in the past. Last year there were no reports of them on the moor but perhaps we didn’t look hard enough. There was a report of both a male and on then Sunday a female in the vicinity. 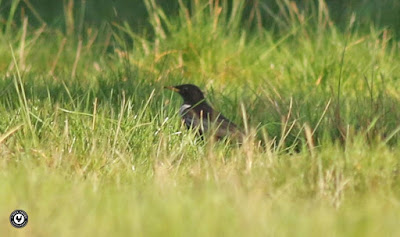 Early on Sunday morning T.S. and I found one feeding in the mist along the track through the Carpark Field it was alongside a Blackbird and the size difference was very marked.

Bitterns were very much in evidence this weekend and seldom have they been so visible on the reserve. There would seem to be two booming males present and one is certainly more dominant than the other. Although usually favouring the large reedbed and the smaller one at Noke, on Saturday the more dominant individual was booming from the rough sedge area on the western side of Greenaways. He was constantly on the move, stopping at times to point skywards, appearing and disappearing in the low cover. He succeeded in attracting the attention of the other male that flew over and eventually settled on the eastern side of the field. 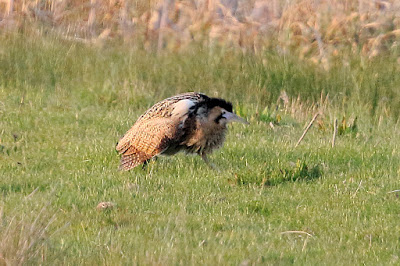 It has been observed while booming and at other times the dominant bird has been even been seen displaying to a female, out in the open. It was really pleasing to be able to give visitors a chance to see this exceptionally secretive bird out in the open, many of whom were seeing one for the first time.

A couple of scarcer waders were seen in the last few days including a Spotted Redshank on Saturday and a Bar-tailed Godwit on Tuesday.  There was no report of Spotted Redshank last year, and when we do find them it is most often juvenile birds in the autumn. Little Ringed Plovers are being reported intermittently on Big Otmoor, but the distance and the amount of cover mean that might be there all the time, but on the wrong side of the tussocks! 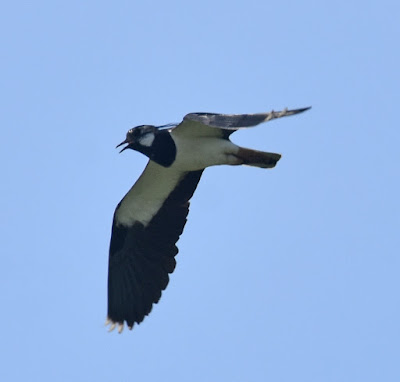 Garganey are still making occasional appearances on the reedbed lagoons with a single male being reported regularly and on two occasions a pair being seen. There was a female Gadwall out on one of the greenways ditches with ten ducklings, although with our regular Marsh Harriers and Peregrines we wonder how many of them might make it to fledging.
There were two Cuckoos present over the weekend calling simultaneously from different parts of the reserve. Once the females arrive and they start their courtship chases we will be able to see if we can match the good number that were present last year.
Two Hobbies were seen on Saturday. They are a week or so earlier than normal. We always host double figures of these wonderful aerobatic falcons during the first couple of weeks of May before they disperse to breed. Their dragonfly and damselfly prey are just starting to take to the wing, on Sunday I saw a newly emerged Large Red Damselfly in the long grasses beside the path to the second screen.

The next few weeks will be busy and should tell us whether our Turtle Doves have made it back from their hazardous journey. 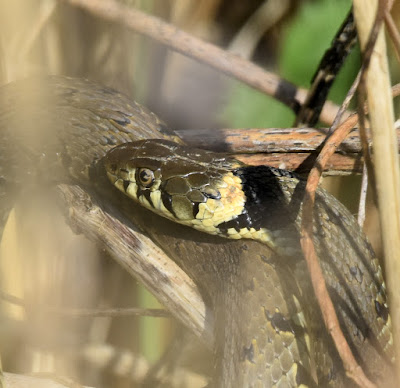 A bright and mostly sunny weekend but with frosty mornings and a cold nagging north easterly wind which left one with a strong feeling that winter has still to completely release its grip.
Despite the cold there were Chiffchaffs, Willow Warblers, Blackcaps and a Sedge Warbler announcing their presence. 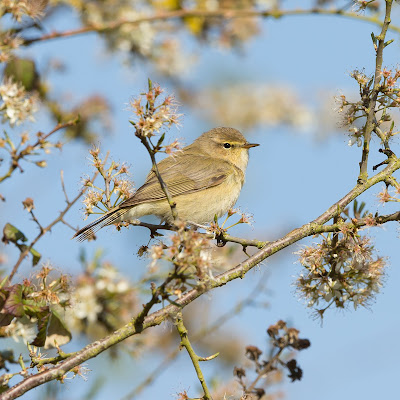 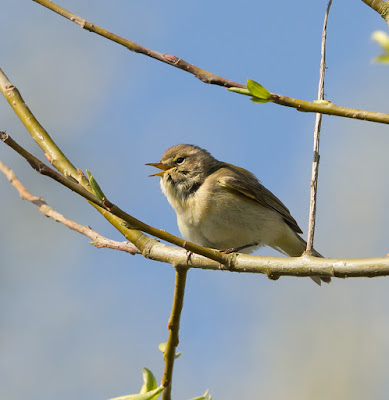 A Grasshopper Warbler had been heard reeling in the carpark field on Friday but was probably put off from calling on Saturday and Sunday by the inclement conditions. We had hoped to record the fist Otmoor Cuckoo of the season, as we had heard that a well-known and photographed bird at Thursley Common had been back a week. A Cuckoo was indeed heard on the moor but not until Sunday afternoon, a few hours after we had left! 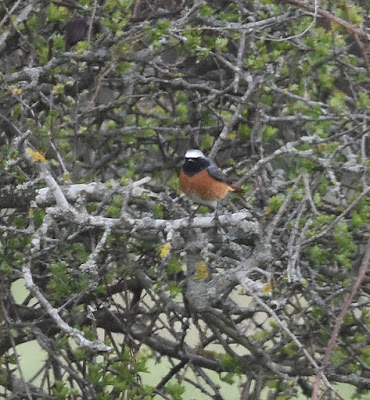 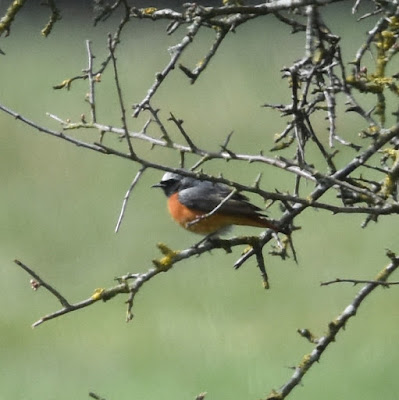 On Saturday morning a male Redstart was found in Long Meadow and it, or one very like it, was still there on Sunday morning. It was a stunning, brightly coloured male in immaculate breeding plumage, they are one of the most colourful and exotic looking of our regular birds. It was darting out from the base of the isolated bushes to snatch its insect prey from the ground, but as is usual for these birds, it was very shy, flighty and difficult to photograph. 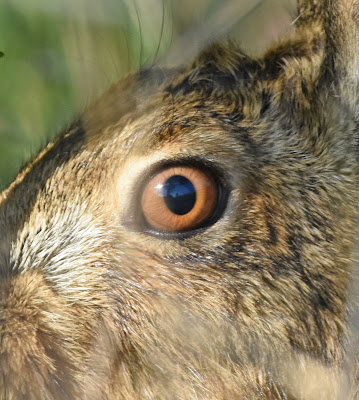 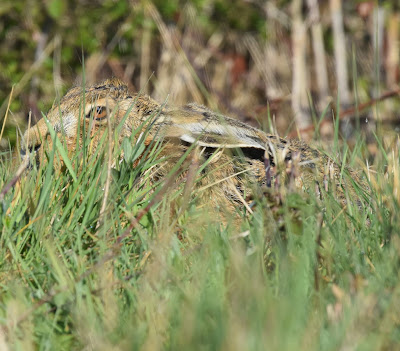 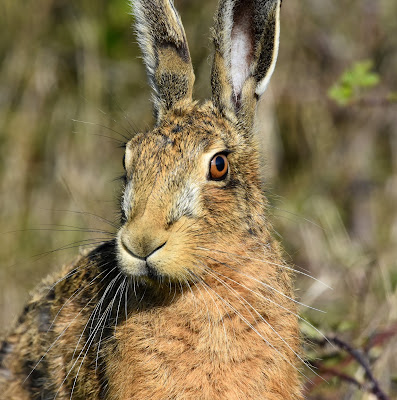 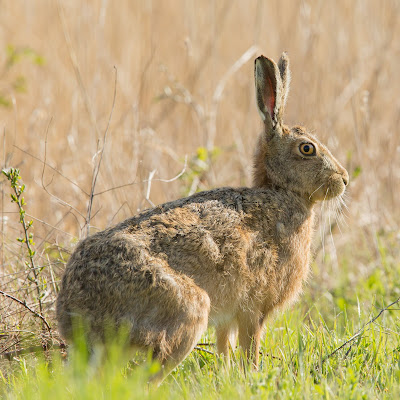 The Otmoor Brown Hares were very active this weekend with four individuals running circuits on Ashgrave on one occasion racing through the flock of Linnets feeding on the ground beside the hide and scattering them in panic. A couple were boxing out on Greenaways and another individual allowed a really close approach as it crouched on the bund, it was relying on stillness to hide it and in the end its courage failed, and it hurtled off down the path. I managed to take several pictures of it, and at one point it was so near that I couldn’t get it all in and annoyingly managed to cut off its ears. There was one shot however where if I enlarge it enough on my screen, I can see myself reflected in its eye. 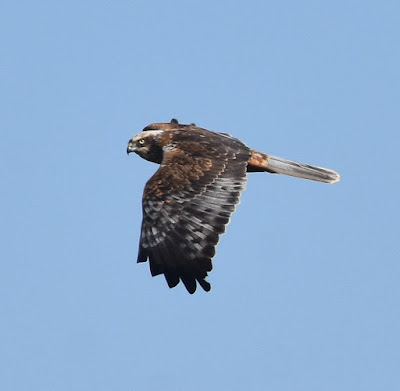 There now appear to be an additional pair of Marsh Harriers in and around the reedbed. There is a quite distinctively marked male that has much paler underwings than the regular male that has been resident for some time. On Sunday the bird was displaying climbing high and then hurtling downwards with a tumbling display. The “new” pair were seen mating several times on both days and food passes were being carried out by one or other of the pairs. 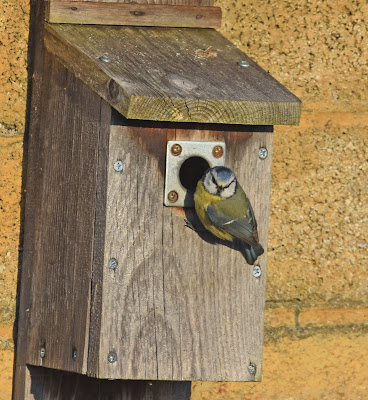 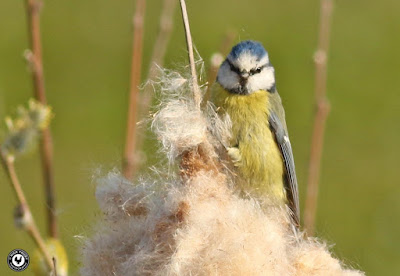 A Bittern can be heard booming regularly out from the first screen. Last year there were two booming males, with one in the linear strip of reeds that border the northern edge of Ashgrave and the other in the southern half of the main reedbed. The RSPB would like to know if anyone hears Bitterns booming from the area towards Lower farm at Noke. 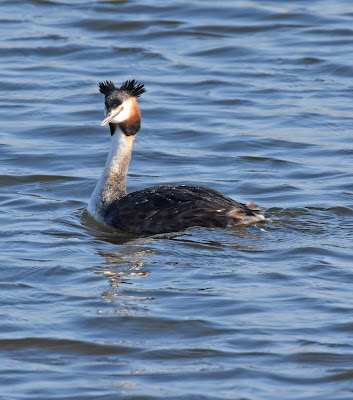 This weekend with rising temperatures and a southerly wind we should record the four remaining regular warblers and in the fortnight or so to come we will be waiting with bated breath to see if the Turtle Doves have made it back…….fingers crossed!