We have experienced everything that the British summer can throw at us during the past fortnight. We have had extremes of heat, sunshine, humidity and downpours. I have also had rather cool breezy mornings and even some mist. The moor and its wildlife have proved to be remarkably resilient in the face of exceptional conditions. 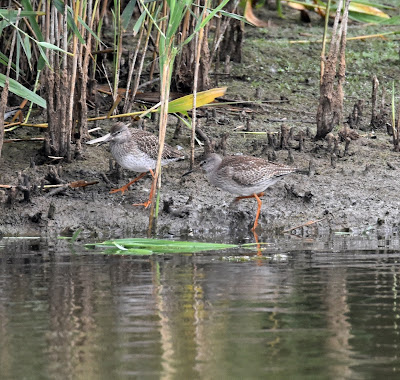 The water levels in front of the first screen have continued to reduce and more mud is being exposed and is consequently attracting more waders. We have had a regular flock coming and going of over one hundred and sixty Lapwings many of which are juveniles. The youngsters have very small crests and show a yellowish “nicotine stained “ face. Their feathering is more scaly than regular  adults. A lone very young Little Ringed Plover was also seen both weekends.
This weekend there have been four juvenile redshanks feeding across the mudbank and two young Common Sandpipers have been picking insects from amongst the drying vegetation and venturing into the reeds themselves.
Last week three Black tailed Godwits dropped in, but we could not locate them again out on Big Otmoor. Post breeding parties of Snipe can also be spotted among the dead stems of last year’s reeds although numbers are difficult to assess as they are so well camouflaged. A newly fledged group of five young Curlew are frequenting Greenaway’s and are very likely to have been raised in the greater Otmoor basin. 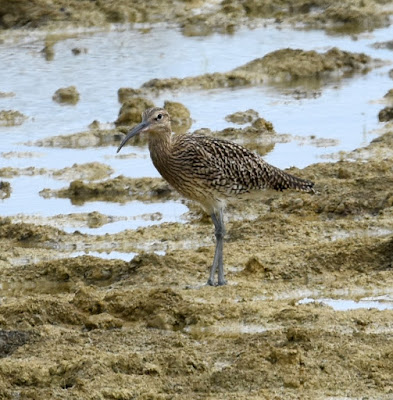 Elsewhere on the reserve young birds and parent bird with bills full of food seem to be everywhere. I have seen several clutches of freshly fledged Blackcaps being provisioned away from the nest, they keep in touch with the adults and each other using a sharp “tzack” call like two stones being rapped together. 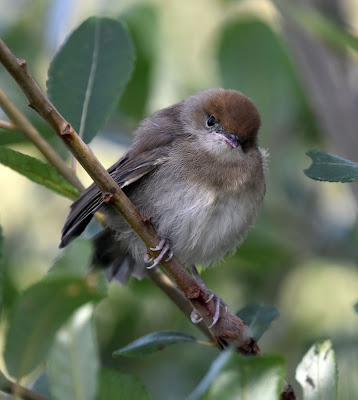 A notable find on the twentieth of July was a juvenile Stonechat near the cattle pen on Greenaway’s. This is the second consecutive year that we have seen very young Stonechats on the moor in July and wonder if it means that they are breeding close by.


Last weekend there were at least eleven Common Redstarts a field close to the reserve. This area must be very important for moulting, feeding and fattening up before migration. They can usually be heard before they are seen as they use a “wheeet” call similar to that of Willow Warbler and Chiffchaff but a little more drawn out and stronger.


Common Terns are still on the raft and around the ditches and lagoons but breeding activity seems to have stopped now for this season. Bitterns are still being seen over Greenaway’s and the reedbeds but not with the same level of regularity which we saw last year.
Young Marsh Harriers can be seen loafing in the low bushes around the northern reedbed. Once again there has been an influx of Kestrels onto the reserve. It seems to be a regular annual occurrence. They appear not to breed on the reserve but arrive post breeding to take advantage of the abundant large insects and rodents out in the grasslands. On Saturday there was one group of four loosely associating over the flood field and  another couple of adults over Big Otmoor and Ashgrave.


Our star butterfly, the Brown Hairstreak, is now on the wing and can often be seen along the Roman Road. Over the next few weeks I am sure that they will attract many admirers once again. 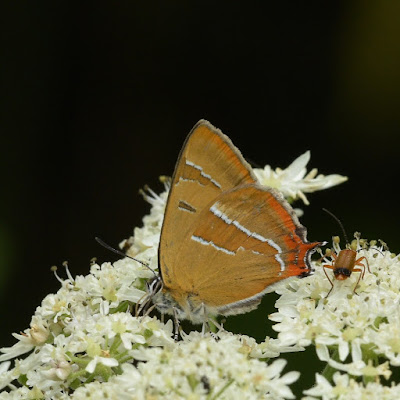 A Purple Emperor was spotted at the top of one of the oaks in the Roman Road, this is the  second year that one has been recorded in this vicinity and suggests that there may be a satellite colony becoming established. We are not very far away from the very strong population in Bernwood.
My last posting's mystery insect was an icheumon wasp (thanks to Jeremy Dexter) This weeks is even weirder!
On Tuesday of last week, we scattered Paul Greenaways ashes, appropriately enough in the middle of Greenaway’s, in accordance with his wishes. Attended by his brothers, some of his birding friends and a fly over Curlew we let him go, it seemed totally appropriate to leave his final remains in the place that he loved so much. Rest in peace Paul.

A changeable weekend with a warm and sunny day on Saturday and a much cooler fresher day on Sunday.
Things have quietened down on the reserve except at the first screen where the Black headed Gull colony from Big Otmoor seems to have decamped to en masse. The gulls are still breeding, and chicks can be seen at every stage of development.
On one or two of the nests that are on the edge of the reeds there are still adult birds sitting on eggs. They are very noisy neighbours to each other and behave aggressively to any other birds straying close to their young, even if they pose no threat at all. The colony generates a great deal of noise and they can be heard from the main bridleway path. 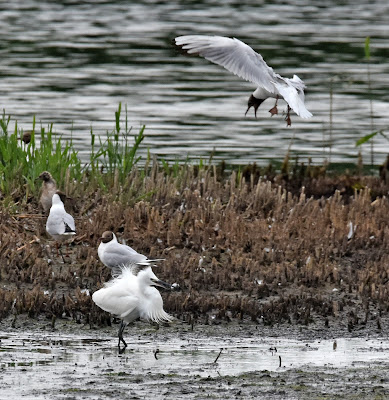 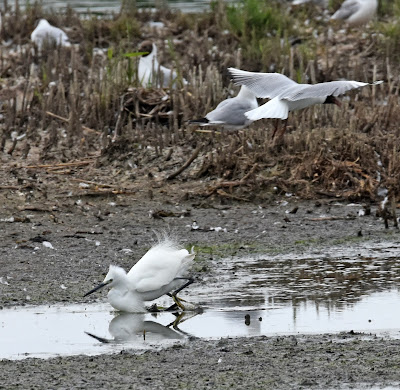 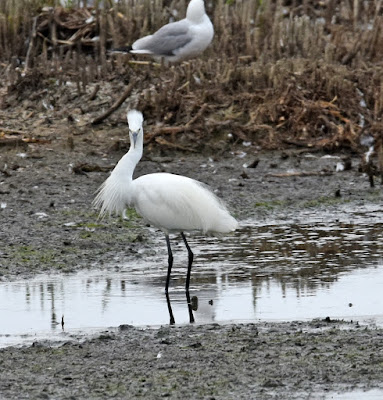 Several Little Egrets now are using the muddy spit at the back of the lagoon as an area to rest up on. When one of these birds landed on the edge of the island where the bulk of the gulls are nesting it was dived at repeatedly until it moved away. Its reaction to a threat is interesting, as it transforms from a tall sleek bird into a short fat one with all its finer longer feathers puffed out.
On the edges of the lagoon there are at least twenty or so post-breeding Coots. Their aggressive behaviour towards each other now seems to have mellowed and they potter about, occasionally setting off in columns that scuttle across the mud in their smart black plumage like mourners late for a funeral.


The muddy areas are getting much more extensive and are attracting one or two waders. This week an Oystercatcher was feeding in the shallows and a juvenile Little-ringed Plover was running about catching insects on the edge of the reeds.
The Common Tern colony at the second screen is still very active although there are now fewer birds sitting and there appear to be fewer chicks. The adults are still bringing in plenty of fish and can be seen hunting along the River Ray and in the main ditches around Greenaways. Arriving with a fish is a noisy business and it takes several passes and false landings before the incoming bird lands and presents either a chick or a partner with a meal.


The bridleway Sedge Warbler is still performing for the camera and still presumably trying to attract a mate or hold a territory. It puts an enormous amount of energy into belting out its song which has some peculiar and unique whistled notes in it, before flying up in a parachute display. It has been doing this nonstop now for over three weeks !


Tit flocks are everywhere now and have a smattering of odd warblers amongst them. The Redstarts are back on the southern side of the moor now. I saw a minimum of four on Saturday, two of them were juveniles with fairly short tails and were very speckled. I have a strong feeling that they must be breeding not too far away.
There are currently three Common Cranes about the moor. There is our regular pair, that are never more than five or six metres apart and always fly together, and what we assume is the lone female that was present earlier in the year.
The pair are being spotted most days on the northern side of Greenaway’s feeding in amongst the long grasses, occasionally they can be seen flying out onto the MOD land to feed. 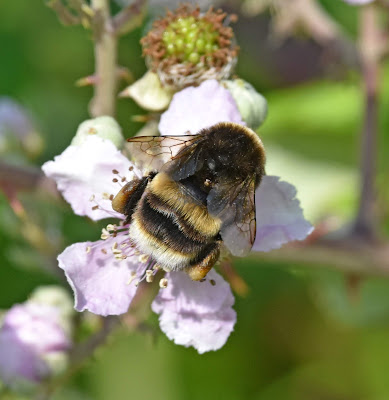 Presumably they are taking the Grasshoppers that seem to be particularly abundant this year. As you walk through any of the grassy meadows, they can be seen pinging away from your footsteps. At this time of year nature really is at its most prolific.

Saturday and Sunday 6th and 7th July and Butterflies

The summer continues to roll round and as expected we are starting to see a few more waders coming through the reserve. There was a Green Sandpiper feeding on the spit of mud that now extends across the back of the southern lagoon.
The Black-headed Gull colony has relocated to the lagoon in front of the first screen and there are at least ten small, newly hatched chicks to be seen, whilst two pairs are still sitting on reoccupied Coot nests. The Gull chicks range from the cute and fluffy stage through to freshly fledged and flying. The parent birds are very attentive and challenge anything that comes too close to their offspring. 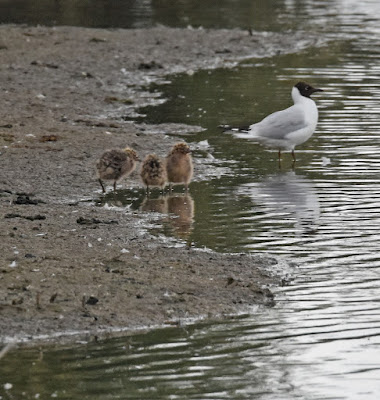 With the warmer temperatures and little rainfall this muddy area is sure to grow more extensive. On Sunday morning there were three Little Ringed Plovers on one of the Greenaway’s scrapes, two adults and a juvenile.

An unpaired Hobby can usually be spotted first thing in the morning out on the fence posts on Greenaway’s. It favours the nearer perches and can often be seen taking off and seizing a dragonfly before setting back down to eat it. Curlew can still be heard and a young bird was seen flying with an adult.


Another sign that time is moving on was the sighting of the first party of returning Redstarts on the northern side of the reserve. It may have been a family party as there was certainly a pair of adults and at least one young bird. Over the next couple of months they will move through often staying for a week or so while they moult and feed up for their migration.


There are still birds singing as they set up for second broods, there was a Grasshopper warbler reeling in the carpark field on Saturday and another right beside the path through July’s Meadow on Sunday morning. For the first time since the spring I heard no cuckoos calling and they are now well on their way back to Africa. We will be listening out for the begging calls of the young cuckoos. They can sometimes be seen being fed by their diminutive surrogate parents outside the nest once they have outgrown it.
Other birds can be seen with beaks full of invertebrate food for their offspring or busily hunting through the bushes. There are also young warblers beginning to gather together into loose mixed flocks and individuals can sometimes offer an id challenge. 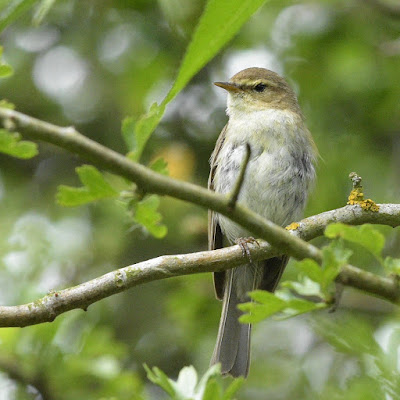 One of the greatest attractions on and around the moor at this time of year is the great diversity of invertebrate life to be seen. 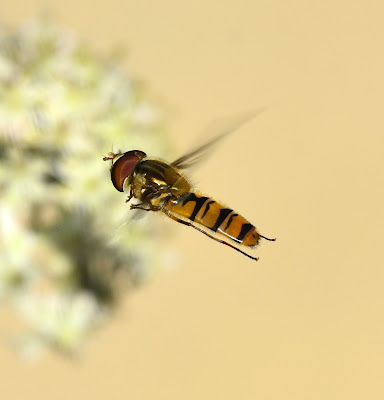 This is especially true of butterflies. It seems to be a good year for all species and the hay fields are busy with Meadow Browns, Ringlets and Marbled Whites. We are very lucky to have four species of Hairstreaks resident on and around the reserve. 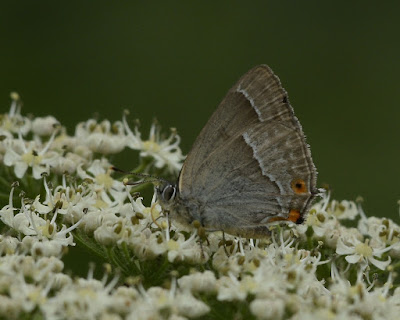 The Black Hairstreaks are scarcer and are nearly at the end of their flight period. Purple and White Letter Hairstreaks are on the wing now and seem to be present in good numbers. The Brown Hairstreaks will be flying in a couple of weeks time and I am sure that they will once again attract lots of admirers to the Roman Road. 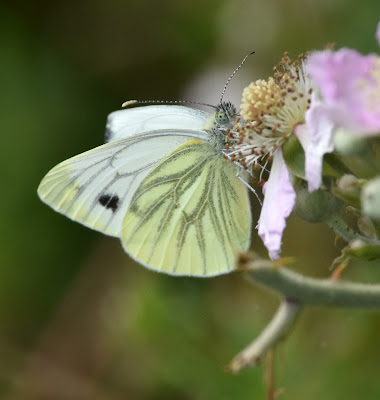 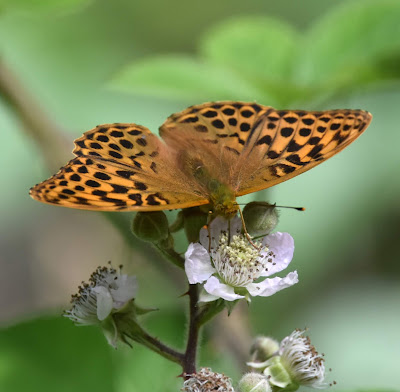