We have finally had some decent rain and at last there are pools starting to form in the middle of the scrapes that have been dry for too long. Last weekend the rain was kind enough to fall mostly at night and on both Saturday and Sunday mornings we enjoyed periods of crisp bright sunshine with clear washed skies, worthy of the finest Turner watercolours. There are still leaves clinging to the oak trees. They are all shades of gold and bronze and they blaze out when lit by the low sun, especially so after a shower when they are set against the inky blue clouds of the departing rain, sometimes embellished with a rainbow.

The Starling roost has continued to grow in number and has built up rapidly to numbers in excess of fifty thousand. The numbers are spectacular but there is no guarantee that they will perform their swirling murmuration display. More often than not they go straight down into the reeds to roost covering the reeds like a black oily tide and constantly chattering to each other. We still have not been able to determine the factors that produce a spectacular roost it must be related to wind, temperature and weather but we have yet to understand it.

Such large numbers are naturally attracting more and more raptors to what must be a predictable food source. The latest addition has been a Ring-Tailed Hen Harrier that has started to frequent the roost on the lookout for its evening meal. We are hoping that the splendid male that left us last April, will have evaded the gamekeepers and will make it back to overwinter again on the moor. During the past week two Peregrines are also haunting the roost, as well as two pairs of Sparrowhawks and the resident Marsh Harriers. We have noticed that first thing in the morning there are always one or two Red Kites patrolling low over and around the reedbed. With such large numbers of starlings it is inevitable that there will be sick, ailing or injured individuals left behind when the flocks depart at dawn, we assume that the Kites are seeking out such casualties.
On Sunday morning one of the Peregrines was perched up in a dead Oaktree on the far side of Noke Sides judging by its size we estimated it was a male. This has often been a popular lookout for Peregrines as it offers panoramic views over the areas where Lapwings, Golden Plover and Woodpigeons feed.
Last week a Peregrine was seen to stoop at dusk on a bat, probably a noctule, it was unsuccessful, but this was a behaviour never previously seen by the observers.
During the past week two Otters were seen on the bank to the right of the second screen. It was the first otter sighting for some time, the animals concerned might be a male and female or perhaps more likely a female and cub, there was a marked difference in size between the them. On Saturday morning on the southern lagoon we noticed that the ducks were very restless and easily spooked, moving out away from the edges en masse and occasionally flying. After watching for a while I just glimpsed an otter diving and later on swimming swiftly along the reedy margin on the far side of the water. 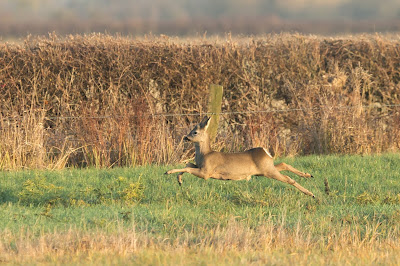 I was also lucky enough last weekend to have a spectacular view of four Roe Deer running past me rather than the normal view of a deer running away from me. We were able to see them with all four legs off the ground like fairground horses and admire their athleticism at close hand.
For the first time this winter there were Lapwing flocks of several hundred birds both over and on big Otmoor. Duck numbers too are starting to rise again with many more Shovellers and more Wigeon present.

Bitterns are being seen frequently over and on the reedbed we certainly saw three different individuals on Saturday morning from the first screen. People watching at the second screen saw an individual climb up the reeds on the northern edge of the lagoon and stand in the sunshine for a while. On Sunday we came upon a Bittern stalking through a patch of sedge it saw us and before slinking away drew itself up to its full height making it easier to see rather than hiding it. It’s a technique that really only works in tall reeds!

Just as I am about to post this blog I have heard of a Glossy Ibis flying over the second screen. It may very well stay in the area just as the previous bird did, the Otmoor basin is a very secluded and extensive area. It is a very welcome addition to this years’ more modest list.