This week continued much as the others of late with little that was particularly new or different to report. Autumn continues to creep on and the changing colours are increasingly evident in the trees and bushes. 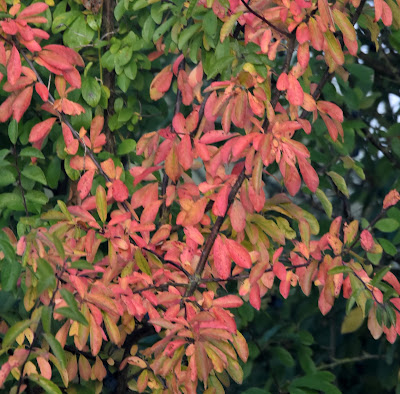 However, this week there is a major development to report. If we are to believe the transport planning authorities (my beliefs are always strongly tempered with cynicism when they involve government) the whole of the Otmoor Basin is no longer being considered as part of the route for the Oxford to Cambridge expressway. I am delighted that the threat has been lifted from area that I care passionately about and that people who live in the surrounding villages can breathe a sigh of relief. Nonetheless it would be churlish just to glory in our good fortune when there are bound to be other special places and habitats that will now come under threat. We must be prepared to argue for the protection of any valuable wildlife sites that may now be in the firing line. 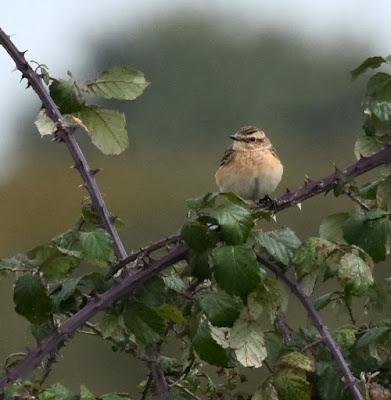 I finally managed to catch up with passage Whinchats on Sunday having once again managed to be in the wrong places at the wrong times on Saturday. I found three hunting from the wires at Noke in a very blustery wind and caught up with another that has based itself in a large bramble at the eastern end of the cattle stockade on the edge of Greenaways. The particular bramble patch also held a fine fresh Common Whitethroat and a Lesser Whitethroat as well. In amongst the stakes and bars of the corral many of the weedy feed plants that we put out in the winter have grown and set seed and these are attracting a small flock of juvenile Goldfinches. 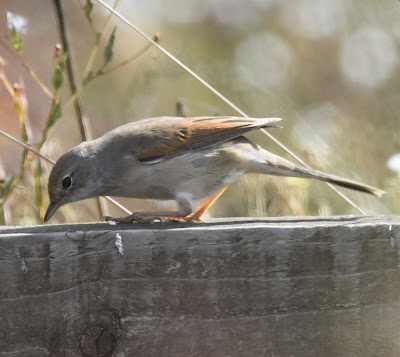 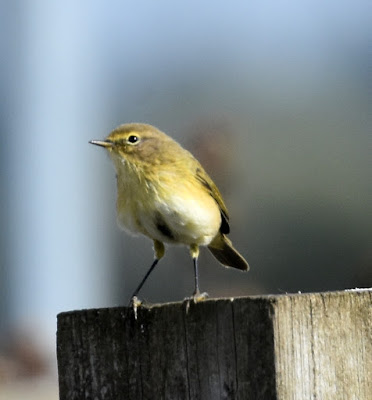 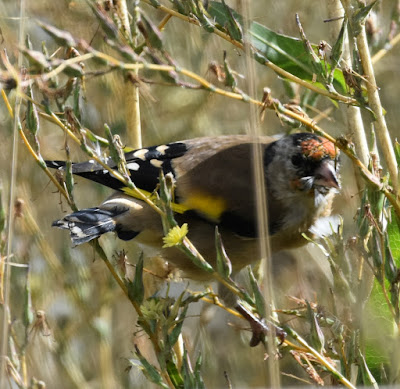 At Noke I counted four young Green Woodpeckers feeding on the short grass fields and Jays are to be seen and heard gathering acorns and flying noisily along the hedges. 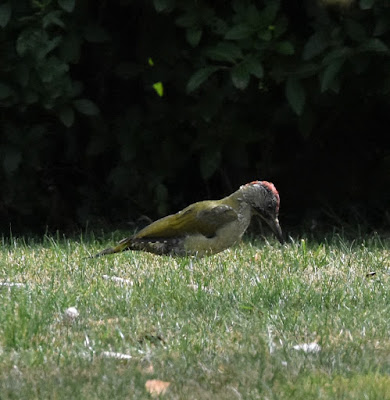 We saw Hobbies on both days this weekend and the Kestrels seem to be everywhere. A female peregrine was seen during the week and this weekend a smaller male.


We had four Wigeon drop into the first screen on Saturday morning and their evocative whistling calls were yet another reminder that winter is now not so very far away. 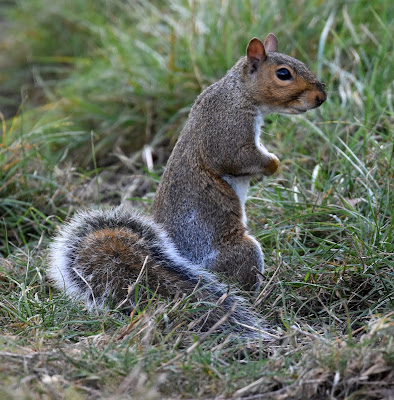 I can’t remember a two or three week period on Otmoor, when there was so little that was new to report. We have slid into early Autumn with golden sunny days at the beginning of the month and a much greyer weekend that has just passed. There has been no significant rain and it is still very dry, with huge cracks in the soil along the bridle way, that are wide enough to twist and ankle if one is not careful. Leaves are beginning to change colour and on mornings that there has been any mist a myriad of spiders’ webs are strung with tiny water droplets like pearls.


It appears to me that blackberries are more prolific this year than normal the brambles are heavy with fruit although the slightly smaller berries themselves reflect the summer drought. Few birds are taking advantage of this bounty although to judge by the quantity and colour of droppings beside the trails, badgers are feasting on blackberries by night. 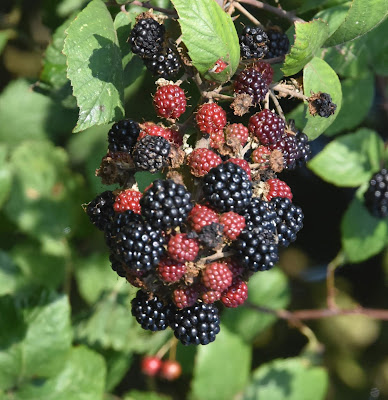 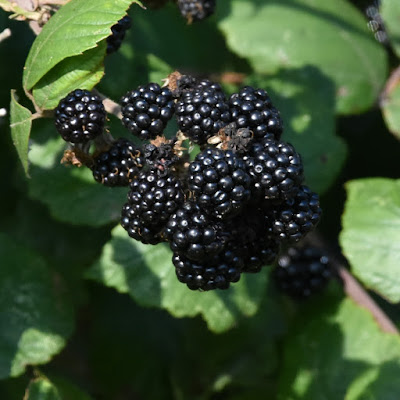 On the lagoons there are morose ducks moulting and the water levels have stopped going down and we have insufficient mud to tempt down many passing waders. There were a few Snipe hunched on the small island that had started to appear on the southern reedbed, but the island remains frustratingly small.


The Common Cranes have been gone for well over a fortnight, we assume making their brief migration back to the Somerset Levels for the winter. Marsh Harriers are now being seen very infrequently, in fact I don’t believe that they were seen at all last weekend. I expect them to return as the Starling roost becomes more established and larger as the autumn progresses. 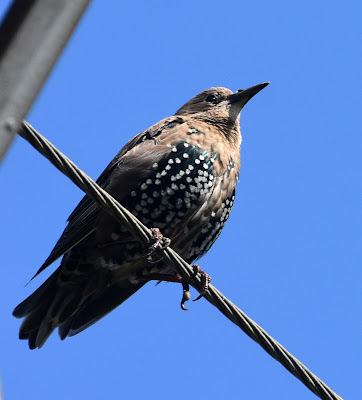 Hobbies have been recorded most days with five individuals hunting dragonflies over Greenaways at the beginning of the month. On Sunday I saw a lone individual chasing hirundines above the reedbed. As is usual at this time of year there are several Kestrels hovering over the main fields or hunting from fixed lookout points.

Other passage visitors are eluding me. On Saturday I walked to Noke to look for Whinchats and found the fields and fences empty. On Sunday I see on Bird Log that Old Caley found six at the farm! Once again, I’m managing to be in the wrong place at the wrong time! I scanned around the cattle on all three fields on Sunday and couldn’t find any Wagtails at all, just a couple of Magpies using the bull as a lookout point
…..on Monday evening the Robys had seventy-eight Yellow Wagtails going to roost in the reedbed and a Barn Owl hunting in The Closes.

Kingfishers are back on the moor. They disappear during the summer as there is no suitable bank for them to tunnel into and return post breeding. I have seen them in the last couple of weeks on the first lagoon, the balancing pond at Noke and along the ring ditch around Big Otmoor and Greenaways. The ring ditches hold a lot of fish, so much so that there was a Cormorant feeding in the reedy ditch beside the visitor trail on Sunday. 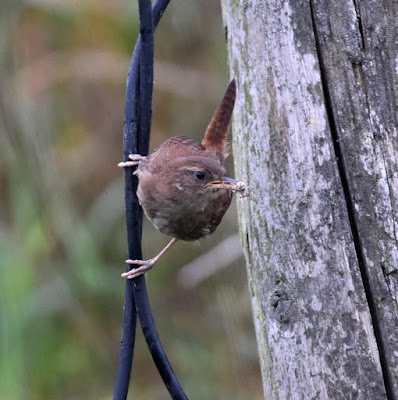 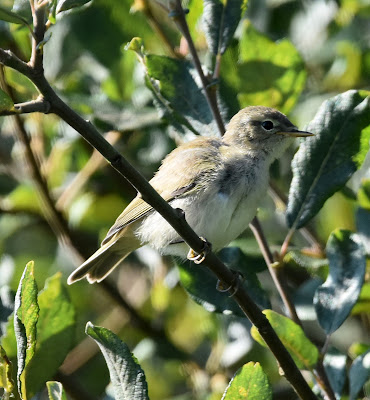 We are approaching the time when Bearded Tit irruptions happen and now is the time when we are most likely to hear and see them. It would be great to be able to welcome this wetland and reedbed special back to the moor again after a three-year absence. We will be listening out for “pinging” over the next few weeks.