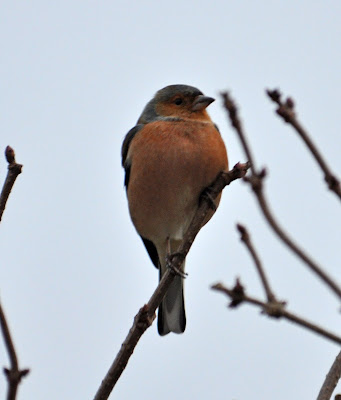 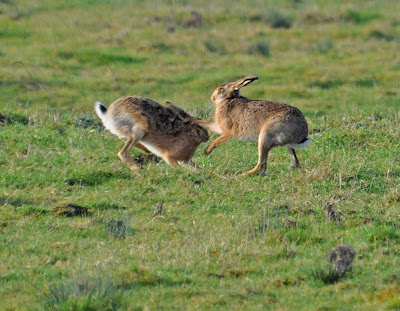 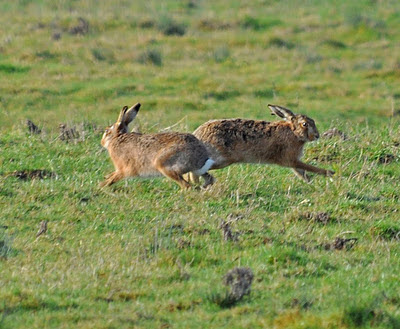 #3 mad Hares (c) P. Barker
Not a great deal happening on the moor this weekend. We did however have one very interesting sighting, of a bird that is common elsewhere but I have only seen once before on Otmoor. On Sunday morning in the gloom “Clackers” and John Prowse found a female Goldeneye out on the northern lagoon in the company of some Tufties. I later had very poor views of it on the southern lagoon badly hampered by the mist. We also recorded our first Coot of the year. Where have they all been?
In the sunshine on Saturday Skylarks were singing and on Sunday I heard my first singing Chaffinches of the year. Two Brown Hares boxed and raced round madly on Ashgrave sometimes coming close enough to be photographed. There are now at least sixty Wigeon on the water in front of the hide and a flock of about three hundred Lapwings. We also had several smaller groups of Golden plover flying over.
The new niger feeder is being used regularly and during the week attracted its first Redpoll. Many of the visitors I spoke to commented on the Bullfinches in the car park field that are becoming more used to people and easier to see, as they are now feeding on the blackthorn buds alongside the track.
There were still at least five Short eared Owls out on Greenaways at dusk on Saturday.
Posted by bark at 01:44 No comments: 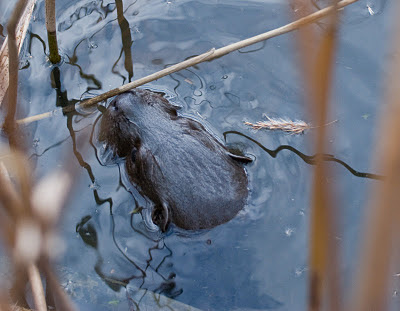 It was this close! (c) Darrell Wood 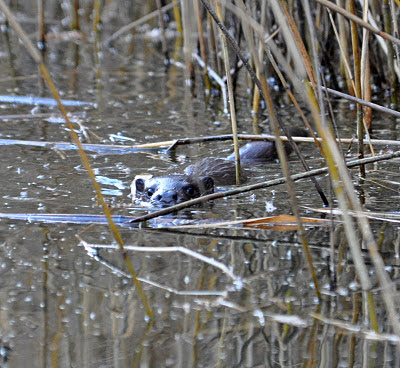 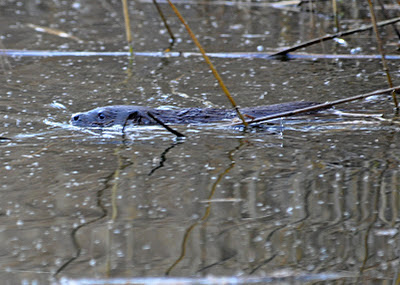 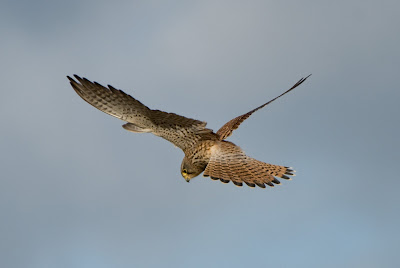 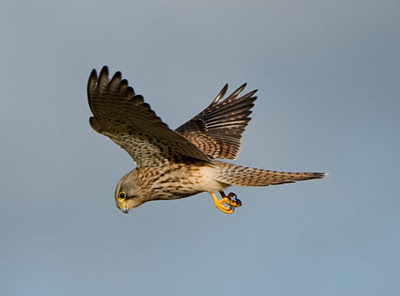 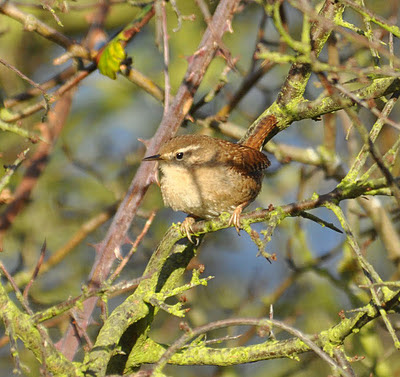 Wren in the sun (c) Peter Barker
A mild but very blustery and windy weekend that meant most birds were keeping their heads down.
Bullfinches are very much in evidence in the hedgerows and in the car park Field. They seem to have moved on from dried blackberries to feeding on buds and shoots. Ravens were present on both days and a Peregrine was again sitting out on Big Otmoor.
A walk up around the southern edge of Ashgrave against the woodland edge added Treecreeper and Nuthatch to the Otmoor year list. There were at least a hundred Golden Plover and twice that number of Lapwings out on Saturday morning. The single Whitefronted Goose is still keeping company with the Greylag flock, that now numbers well over a hundred and fifty. Goldfinches have now found the niger feeder and are taking advantage of it all the time. Wigeon are now using the slightly larger ponds in front of the hide and there were at least thirty there on Sunday morning.
Best sighting of the weekend was another close encounter of the mustelid kind. There were two young otters criss-crossing one of the ditches on the way to the reedbed. We stood still and could scarcely believe just how close one of them came (there will be a photo on the blog that is taken looking down on the animal not more than a metre and a half from the camera, the photo is not mine as by this time it was too close for my camera to focus on!) Size and a complete lack of fear suggested that they were both juveniles. It was a wonderful encounter. People often ask “where do I go to see the otters? “ I have never seen them in the same place twice and any of the ditches or lagoons will have them in at some time or another. The best place is probably one or other of the screens, but they roam everywhere and can appear out of the blue crossing the bridle way in front of you. It all comes down to chance, but if you are lucky it is an unforgettable experience. It more than made up for the fact that all of Oxfordshire's rare birds are turning up elsewhere in the county!
Posted by bark at 02:37 No comments: 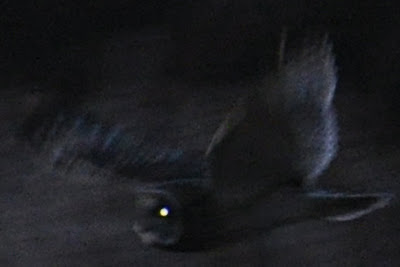 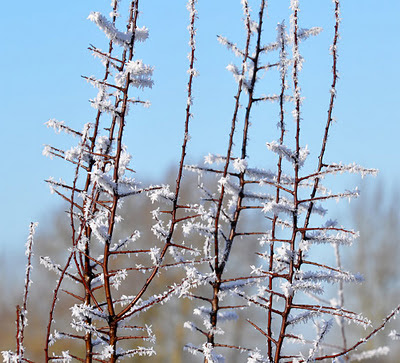 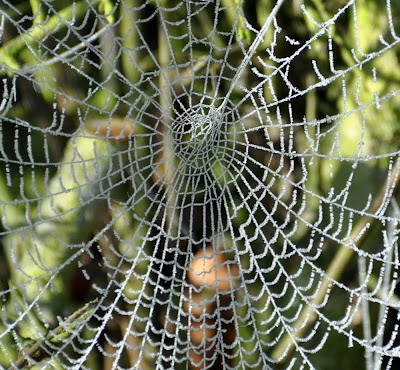 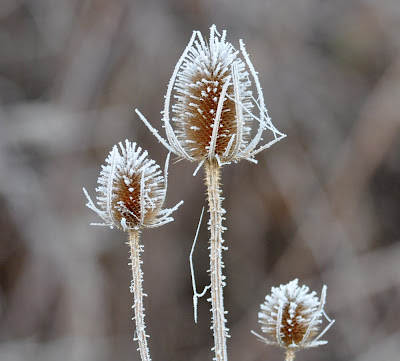 A Brambling was seen yesterday behind the feeders (per Terry Tossel) that brings the year tally up to 76 he also saw another Woodcock.
I have also included some of the threatened ice pictures and a "ghost image of a S.E.O. taken by Ian Curtis in what must have been the dark!
Posted by bark at 02:35 No comments: 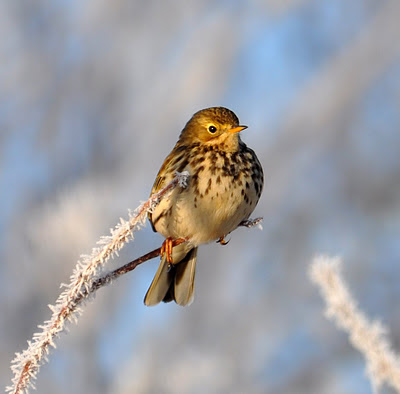 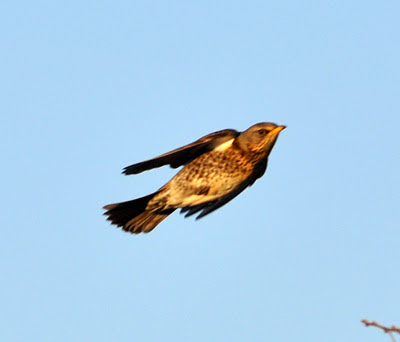 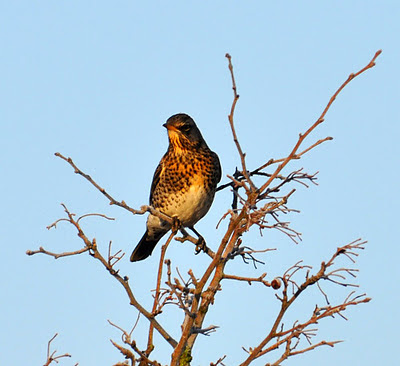 And about to feed (c) P.Barker 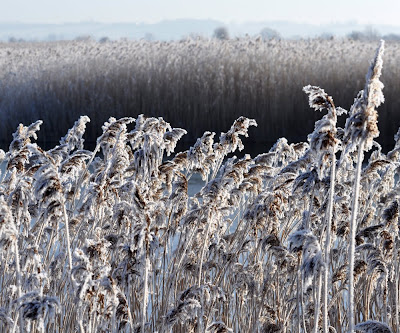 It has become something of a joke in the group that I bird with at the weekend that: “You can’t have too many pictures of frosted reeds / seed heads /spiders webs etc..” This was the weekend for those subjects par excellence. Sparkling hoar frost gave way to cloudless skies of intense blue and photographers were out on the moor in numbers. I am even thinking of putting a supplementary posting on the blog of wintry pictures. Just to compound our problems with lack of water, what water we have is now frozen fast, apart from a portion of the reedbed lagoons.
There were birds to be seen however. Large numbers of Fieldfares and smaller numbers of Redwings were gleaning the last berries from the hedgerows and by standing quietly and patiently by a bush that still had fruit it was possible to get very close views of what can be shy birds. Peregrine was seen on both days with a large female sitting on a post in the middle of Big Otmoor for about an hour on Saturday morning. The Merlin has also been seen twice over the weekend. The Short eared Owls put in brief appearances at dusk but might have been put off by the very large numbers of people who have been turning up to see them. There were more Meadow Pipits around and several Skylarks. Siskins were seen once again along the bridle way between the pump house and the Roman road.
We have added a niger feeder to the feeding station and are looking forward to seeing Goldfinches and Redpolls using it soon, it would be good to hear if anyone sees it in use. The seed scattered by the gate is attracting good numbers of Reed Buntings, Yellowhammers and Chaffinches.
Hares have been very noticeable chasing, boxing and even mating, out on Ashgrave and Big Otmoor. Even the frost has not slowed them up although I thought that March was the month for those antics.
Posted by bark at 04:35 No comments: 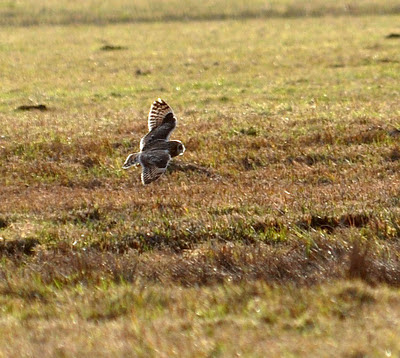 S.E.O. at the Pill in the sunshine (c) Peter Barker 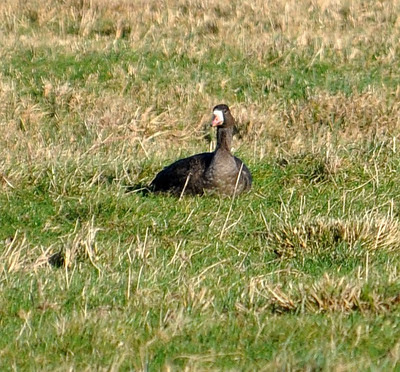 White front back with the flock (c) Peter Barker 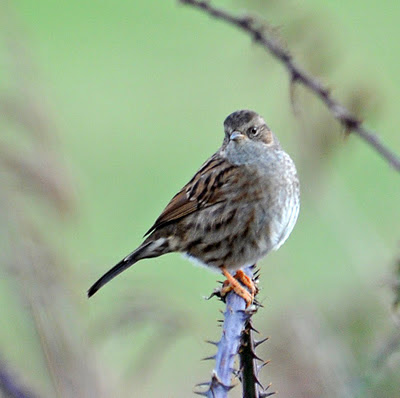 It continued mild this weekend with bright winter sunshine from mid-morning on Saturday and much calmer winds than of late. Short Eared Owls put on great displays both out at the Pill and around the carpark field as this E-mail from Steve Roby describes.....

“Cracking views of a 'Shortie' flying around the car park field from about 3.45 - 4.40 on Saturday. Pete and I thought it was our best SEO experience of the winter. At approx 4.25 the bird perched up in full view which allowed us to show about a dozen other visitors some very good scope images. There were at least three other birds flying around but these were distant, two over the South Pill Field and one at the back of The Closes.”

We found five birds out at the Pill on Saturday morning. The White fronted Goose is once again accompanying the Grey lag flock. It seemed particularly attached to a pair of them and was following them away from the flock. They however did not want company, several times driving it away and eventually evading it in flight. Duck numbers have remained fairly constant and the water levels have not increased much, sadly it looks as though we are in for a dry week!
The year count has moved on to sixty eight species with the addition of a number common birds including Meadow Pipit and Water Rail. As far as I know the Hen Harrier and Merlin have not yet been seen this year.
There are lots of very active passerines in the hedgerows and some are even beginning to sing, albeit in a slightly optimistic and half hearted way.
Posted by bark at 02:59 No comments: 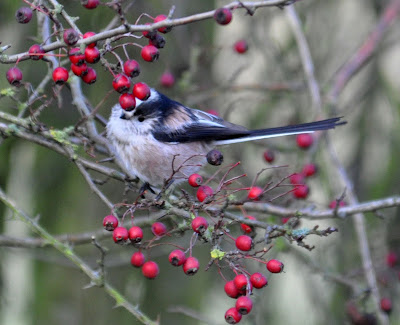 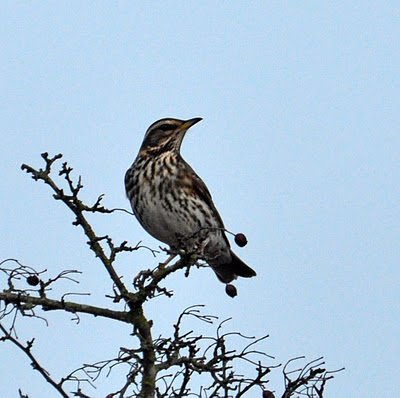 The year changed but not very much on the bird front.
Water levels are starting to creep up slowly but wildfowl numbers are sill low compared with normal years. A pair of Gadwall were out on the Southern reed bed as were a pair of Pintail along with the normal Teal and Wigeon. I visited on Monday afternoon and the car park was completely full with cars parking up the lane. The Short eared Owls failed to put in an appearance and that seems to be the case when it is very windy. There were good numbers of finches and buntings on the feeders and on the bushes by the cattle pen. Amongst them were several Redpolls and some Siskins. A Peregrine put in several appearances over the holiday period and the Cettis warbler was both heard and seen. A Redshank in front of the hide along with several Snipe were the years first waders.
The White fronted Goose would seem to have moved on and may in fact have re located to Wytham. The Hen Harrier has not been seen or reported since last week.
Despite these absences the Otmoor year list is currently sixty two. I will try to update it as records come in.
Posted by bark at 11:12 No comments: