The weather has continued to be very cold at night with frequent frosts and days have been cloudless and sunny. There has been no significant rain so far this month and the scrapes  and ditches across the reserve are drying out rapidly. 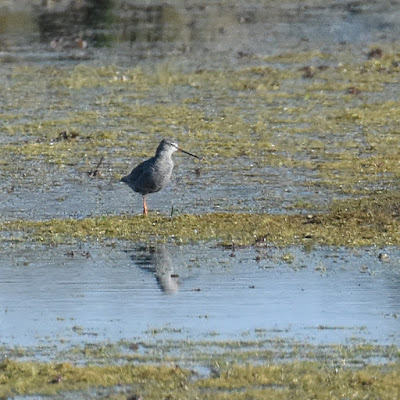 The exposed mud has proved to be very attractive to passage waders and we have hosted up to six Bar-tailed Godwits and currently there are two Spotted Redshanks, one on Closes and another on Big Otmoor.
Small parties of Whimbrel have come and gone making “ bed and breakfast” stopovers. A Grey Plover has also been noted and over the last few days several Greenshanks have come through. 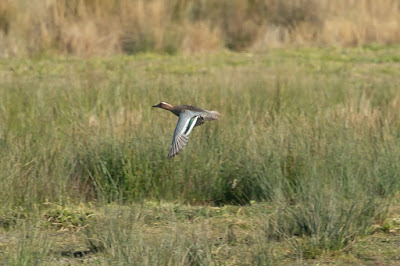 Garganey pair courtesy of Badger
Just as last summer there is a pair of Garganey out on the pools that sometimes fly over to the scrapes nearer to the bridleway where the male has been seen displaying, with neck stretching and head bobbing.
There are still just a few Golden Plovers still around the moor and if one is lucky enough to see them in the sun their golden name is totally justified. 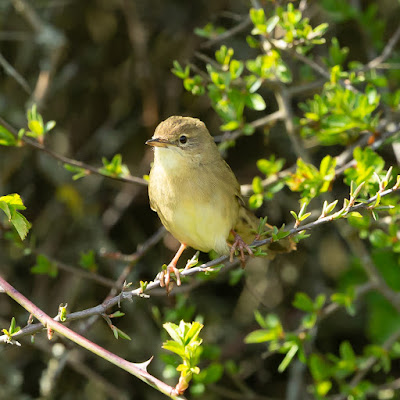 All the regular Warbler species have arrived now with Garden Warbler being heard and seen in the middle of last week and Lesser Whitethroat arriving on Saturday. 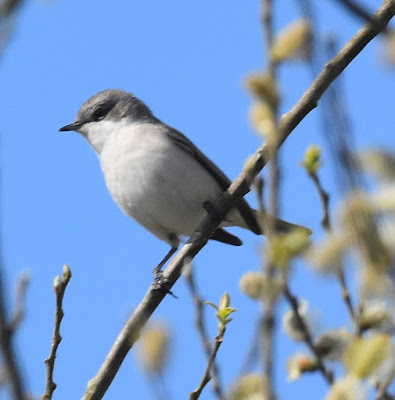 Grasshopper Warblers are often less shy and retiring when they first arrive and will often reel away in the open. They are also easier to see as the trees and bushes are not yet in full leaf. We were very fortunate to encounter two of these less retiring individuals, they offered point blank photo opportunities. 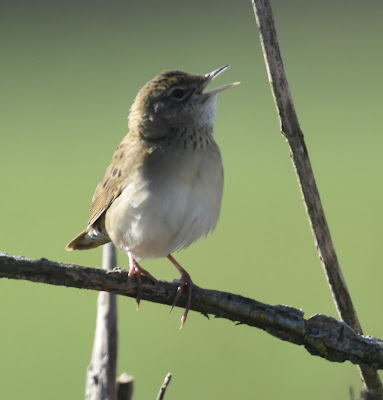 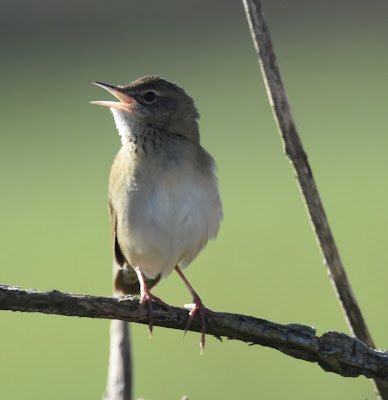 People sometimes disparage small brown warblers as being boring but the subtle plumage detail of a Grasshopper Warbler when seen well, in good light, is a delight. There is a male Sedge Warbler that has taken up territory along the bridleway and is singing his manic song at full pelt out in the open and his plumage too is anything but brown and boring!


Willow Warblers are still singing, but Chiffchaffs, that arrived so much earlier are paired up and already nest building, we are hearing more contact calls from them rather than the full-on monotonous song. 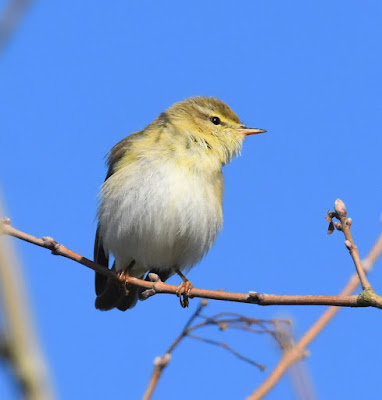 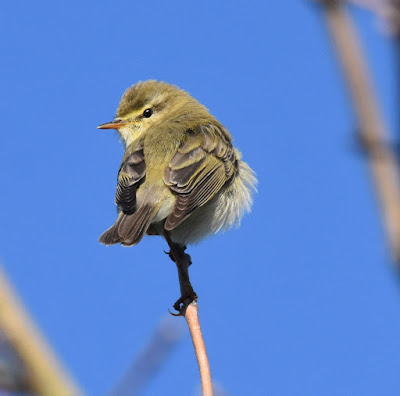 Reed Warblers are calling from the reed fringed ditches but are difficult to see as they are currently staying out of the wind and singing from deeper in the reeds. Blackcaps can be heard almost everywhere often singing from the tops of the bushes whilst the similar but subtly different song of the Garden Warbler comes from lower down and deeper into the vegetation. 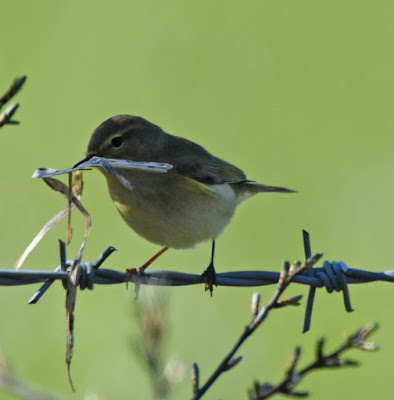 All of this chorus of birdsong is punctuated from time to time by one of the three booming Bitterns present on the reserve, sounding off a salvo of three or four foghorn-like booms. While walking right around the moor last weekend we met a couple who live in Oddington. They commented that they had heard the reedbed Bittern booming at two in the morning when the moon was bright!

Hobbies have arrived but not yet in the larger numbers that we usually attract when they are freshly arrived and before they disperse to breed. The peak time for Hobby is usually in the first ten days or so of May. Three cuckoos have been heard simultaneously, but will not be seen very often until the Reed Warblers start nesting.

A Ring Ouzel was seen and photographed at the end of the Roman Road and a White Stork was recorded over Big Otmoor. Two Great White Egrets were seen on Saturday and Sunday, perhaps two of the birds that have been seen frequently at Blenheim Palace.
On Sunday we recorded our first Swifts of the year over the first screen and southern lagoon.

The year-list is an impressive one hundred and forty-six species with a number of regular birds still to come, unprecedented at this point in the year. The Glossy Ibis has reappeared after being seen with two other birds and we wonder what will come next.
Posted by bark at 00:26