On misty, dewy mornings it is possible to appreciate just how many spiders there are at large in the country. Hedges, brambles, reeds and tussocks are all smothered with gossamer threads. Some appear to be unformed tangle traps whilst others show more careful deliberate design. 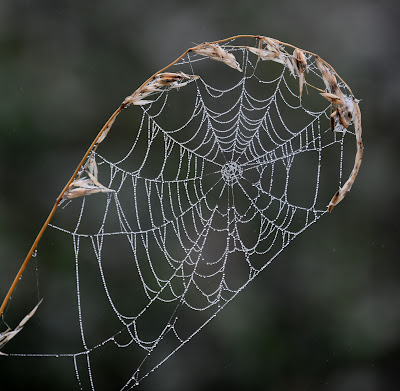 Some look like carpets around a central hole where their builders lurk waiting for unwary prey to stumble across the tripwires. Others are more conventional orb webs that are strung first thing in the morning, with pearls of dew. One wonders how any insects at all manage to avoid being caught and consumed!


The recent rains over the last few weeks have encouraged a new flush of grass across the fields that for so many weeks this summer have been parched, sere and bleached. The fields have mostly been topped but in such a way as to leave areas of rougher longer grass and rush for the benefit of small mammals and seed eating birds alike.

A stunning feature of the last two months has been the presence of, at one time as many as forty Cattle Egrets, not surprisingly on and around the grazing cows. They moved from field to field, seeming to prefer the herd on Greenaways more than the others.
They also return from time to time to the reedbed lagoon to bathe, preen and drink. Numbers have declined over the last couple of weeks and the majority of the Oxfordshire flock appears to have relocated to Wytham. 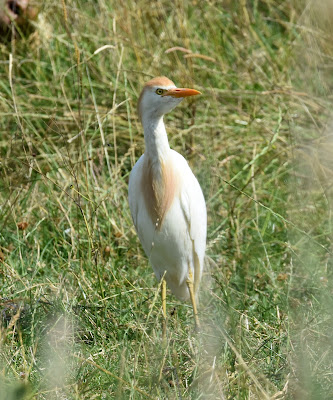 The southern reedbed lagoon has been steadily drained down so that repairs can be carried out on the sluice that is used to manage the water level. This has meant very extensive muddy areas have appeared and they have attracted down a number of  interesting passage waders.

Amongst the highlights were three Little Stints that were seen last week although a Sparrowhawk flushed them, and they did not return. A Wood Sandpiper was another scarce visitor that spent a brief time in front of the first screen. There has been a regular trickle of Green and Common Sandpipers through, and on occasions Black-tailed Godwits.
There are always Snipe feeding in the shallows or resting camouflaged and motionless amongst the reed stubble. Lapwings fly in from feeding in small parties and as soon as they land walk down to the waters edge and drink.


A juvenile Water Rail has been picking its way around the scrubby margins appearing and disappearing at will.

As is normal at this time of year Kingfishers are back, whizzing across the water with a blue flash and high-pitched call or perching on reed stems and purposefully placed sticks. They have also been seen fishing along the ditch beside the bridle way.
A Little Grebe has also taken up residence on the southern lagoon and on Sunday was diving right in front of the screen and frequently coming up with little fish. Two Ruddy Shelduck were at the southern lagoon for a couple of weeks and a Black-necked Grebe was present for several days. 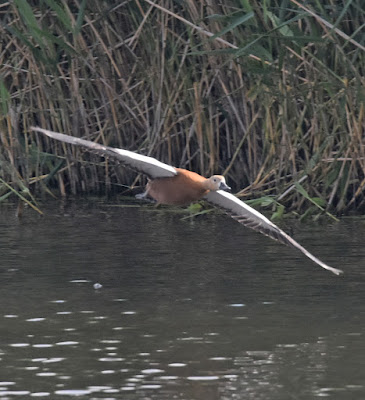 Another passage bird that we saw just over a week ago was an Osprey. It came off the reedbed where it must have been hunting, flew along the ditch on the northern edge of Greenaway’s and perched for three or four minutes in a tall bush in the hedge between Greenaway’s and Saunders Field.

Hobbies have been out and about earlier in the mornings than we usually see them, and they have been hunting the very abundant large dragonflies across the reedbed and along the track to the second screen. Several Kestrels, probably a local family party, are hunting small mammals over the newly mown areas.

There have been Redstarts on and around the reserve since mid June when I found a male in Long Meadow on the sixteenth of that month. There are still at least four or five in the vicinity.

Whinchat numbers have risen steadily and there have been several family parties out on Greenaways, in the Pill area and towards Noke. There have been occasional single Wheatears passing through. 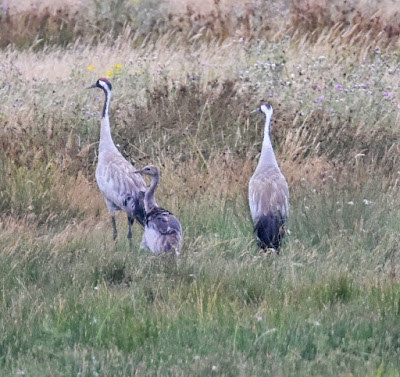 The summers’ star performers have been gone for nearly three weeks now. The Crane family should be making their way back to Somerset for the winter. We hope that we will be informed of their progress and safe arrival when someone manages to read Maple Glory’s leg rings. The juvenile and her male partner are unrung. It was disappointing that both chicks did not survive to fledging but it was fascinating to watch their progress over the weeks as they changed from small fluffy ginger chicks, finally into just one large flying juvenile.
We look forward keenly to their return next March.

There are still flocks of mixed warblers and tits to be found around the hedgerows, in the carpark field scrub and along the Roman Road. There are many Chiffchaffs and just the occasional Willow Warbler. 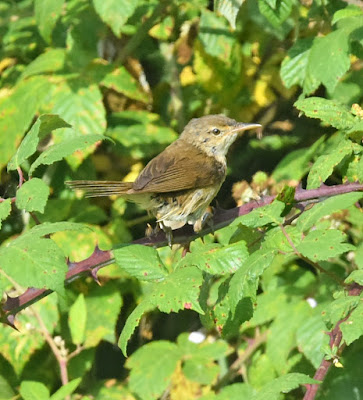 There are still Reed Warblers along the ditches and after four or five quieter weeks Cetti’s Warblers are finding their voices and beginning to establish winter territories.

The effects of the drought and the extreme heat can be seen in the premature yellowing of the leaves and the rapid ripening of seeds and berries. If autumn comes early, it may make for a longer, harder winter period. 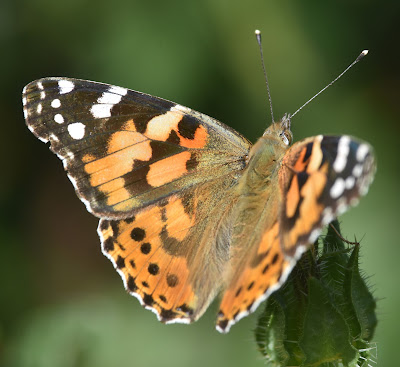 Water levels across the moor are very low and we need several weeks of continuous, steady, heavy rain to recharge the scrapes and ditches and properly wet up the fields again.