As the waters continue to drain down at the first screen, it has become the current “hotspot” on the moor. There has been a steady stream of returning waders moving through and pausing to refuel. The extensive area of reed stubble from the cutting in the winter of 2019-20 is now proving irresistible to loafing ducks, both juveniles from this year’s clutches and to adults that are now going into moult and eclipse. 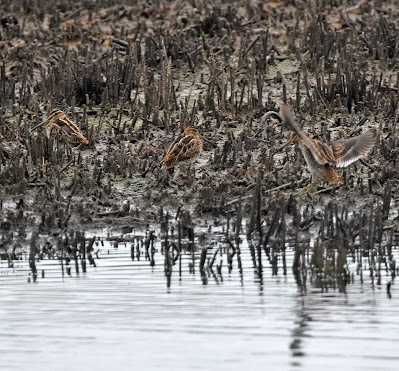 As is to be expected there are now significant numbers of Snipe in amongst the short brown reed-stems, they melt into their surroundings perfectly, their camouflage so much more effective than anything we might come up with! They are prone to taking sudden flight and when they do there always seem to be more of them as they flush than we had thought were there!


Black-tailed Godwits have been visiting, still resplendent in their smart brick-red summer plumage. Wood Sandpipers have been seen regularly, both here and out on the edges of the Big Otmoor scrapes, we have recorded this scarcer wader more often this year than for many years. Common and Green Sandpipers have also dropped in from time to time, picking their way delicately through the dead reeds and around the legs of the loafing ducks. 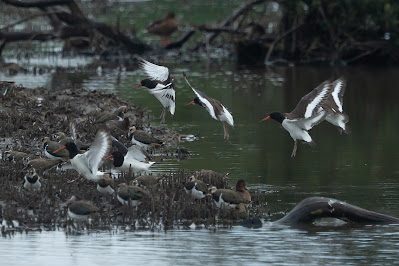 A family party of Oystercatchers flew into the island with two adults and four juveniles. The juveniles are distinctive in having bills that are less uniformly red and having browner rather than jet black backs. They were joined by another adult before flying off together onto Big Otmoor. We assumed that these are the birds that have bred out on Big Otmoor this year.


All three Egret species have been seen out from the first screen. Little Egrets have predominated with a peak count of around twenty there in mid-month. They must have been finding plenty to eat in the way of small fish as the shoals of small fry and larger Rudd can be seen clearly in the shallow waters in front of the screen.

Evidence that there are some larger fish out there could be confirmed, when a young hunting Grey Heron speared a fish out near the island. Its prey was much longer than its head and had to be taken over to dry land to be finally dispatched and swallowed, with a struggle. This attracted what looked like an admiring crowd of Little Egrets that were obviously hoping to steal or share the meal, but all of them far too small to cope with such a catch.


At the second screen the Common Terns have completed their breeding cycle and there were just two chick free adults sitting out on the raft last Sunday. It seems to be a very rapid turnaround from incubation to fully fledged and flying youngsters. The high energy and high protein fish diet must encourage speedy growth and development. Although the Garganey numbers have reduced somewhat there are still three juveniles and an adult in and around the two stunted willows on the right-hand edge of the lagoon. 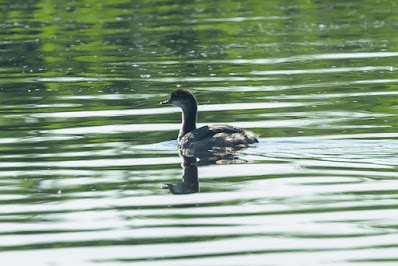 For just a couple of days two weekends ago a juvenile Black-necked Grebe was seen around the margins of the northern lagoon. It was occasionally swimming and feeding close to the Little Grebes and one of their offspring which sometimes led to confusion. It became the one hundred and sixtieth species to recorded on the moor this year, rapidly followed by a Quail, flushed by the tractor on Saunders Ground, which became number one hundred and sixty-one! 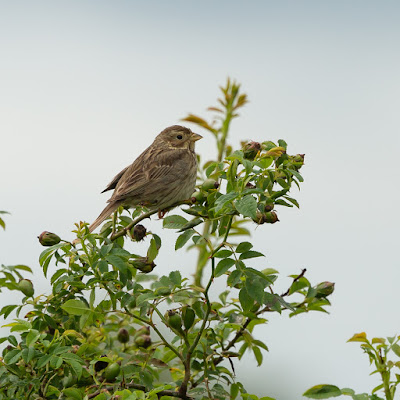 Out at the Pill there are a number of pairs of Corn Buntings, not a species that is found very often around the moor. A number of males arrived at the start of July and started to sing and establish territories. We have speculated that they may have been displaced from another location where silage cutting and haymaking may have started early and so disturbed their breeding. 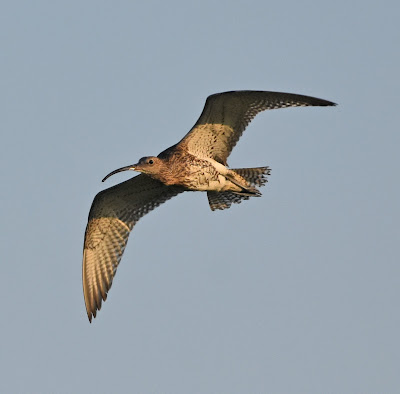 There are also young Curlew out on and over the MOD land they can be distinguished from adult birds by their smaller size and their shorter beaks, there was a small party of eight there yesterday. It appears that this has been a good year for Curlew on Otmoor helped by the wet weather keeping the ground soft for feeding and the active nest protection, undertaken by the RSPB and its volunteers. Clutches were protected with short electric fences to deter mammalian predators at the incubation stage. The seasonal trails in the Carpark Field are now open and are well worth a walk through. The scrubby habitat contains mixed flocks of warblers and tits, on Sunday there was a Redstart calling in there and other Redstarts have been found in the regular places. Spotted Flycatcher families have been seen up on the edge of Noke Wood so there is plenty to look for, the next our or five weeks could bring in some scarcer passage migrants and perhaps some exciting news.